The Embryology Course at the Marine Biological Laboratory, celebrating 130 years, proudly announces their campaign to raise $25,000 to establish and endow The Frank R. Lillie Lecture in Embryology. The lecture will be held as an annual component of the course. 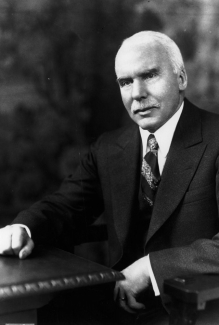 Frank Rattray “F.R.” Lillie was born in Toronto, Canada in 1870. He attended the University of Toronto as an undergraduate with the aim of studying ministry but became disillusioned and ultimately majored in the natural sciences. It was during his senior year that he developed his lifelong interest in embryology. After graduating in 1891, he moved to the U.S. to undertake a fellowship studying morphology at Clark University under the tutelage of Charles O. Whitman. Soon thereafter, Whitman accepted a position as the first chair in Zoology at the University of Chicago in 1892, a position he held until 1910, and Lillie soon followed. Additionally, Whitman had been concurrently serving as the Founding Director of the MBL since 1888, and Lillie first joined him in Woods Hole in 1891.

In 1901, Lillie published his first major work about embryology. After exposing eggs to abnormal concentrations of potassium, Lillie noted that unsegmented eggs underwent cellular differentiation in the absence of mitosis. In 1902, while making these major breakthroughs in his research, Lillie convinced representatives from the Rockefeller Foundation, Carnegie Corporation of New York, General Education Board, and his brother-in-law Charles Richard Crane to provide the MBL with significant financial support. Crane was so influenced by Lillie’s advocacy that he contributed substantial amounts of capital each year toward maintenance, as well as donating real estate to expand the Laboratory’s footprint and research capabilities. During this time of advocating for the MBL, Lillie was also advancing at the University of Chicago, where he became a professor of Embryology in 1906.

When Whitman retired from his position as the Director of the MBL in 1908, Lillie assumed that role. Lillie’s efforts to expand the Laboratory greatly increased. By 1909, the accumulation of land including harbor frontage was sufficient to begin planning for the establishment of permanent laboratories and wharf facilities. Lillie was promoted to Chairman of the Department of Zoology at the University of Chicago in 1910 and published groundbreaking research in the field of Embryology.

Lillie, a pioneer in the study of sex steroids in sexual differentiation, published "The Theory of the Free-martin" in Science in 1917, and detailed his discovery that sex steroids in the blood controlled differentiation. Free-martins, sterile female cows born without sex organs, were a perplexing issue for cattle ranchers. Lillie found that free-martins formed when twins of different sex shared the same placenta. The hormones from the male twin were shared with the female twin, stunting the growth of her reproductive system. In 1919, Lillie summarized his findings in Problems of Fertilization concluding that fertilization was a series of timed and irreversible events.

During his time as Director, the MBL rapidly expanded and garnered greater support from large institutions and foundations. After relying on the financial support of Charles R. Crane and other Trustees, the Rockefeller Foundation authorized a gift of 500 thousand dollars in 1922 for the construction of a substantial permanent laboratory - now named the Lillie Laboratory - and established an endowment for its maintenance.

Lillie remained Director of the MBL until 1925 and was then appointed the President of the Board of Trustees. During his tenure as President, Lillie was promoted at the University of Chicago to Dean of the Division of Biological Sciences in 1931 and served in that role until 1935. Lillie oversaw the Board of Trustees until his retirement in 1942. In addition to his tenure as Director, President of the Board, and Embryology Course Director, he served as editor of the MBL’s scientific publication, The Biological Bulletin, for many years. Lillie passed in November 1947 at the Billings Hospital at the University of Chicago.

If, in the opinion of the Board of Trustees of the MBL, it eventually becomes impossible, impracticable, or inadvisable to use the expendable income from the Fund for the foregoing purpose, the Board may in its sole discretion apply the income to such other MBL purpose or purposes as will most nearly accomplish the donor’s intentions and at the same time permit appropriate and continuing recognition of the commemorative character of this gift.

By June 30, 2024, should this fundraising effort not reach the $25,000 goal, all accumulated funds may be spent annually for the intended purpose until fully expended.

To make a donation with a check, please make the check out the Marine Biological Laboratory and note “Lillie Lecture” in the memo.