Stentor pyriformis with photosynthetic algae inside moves around under the microscope. Credit: Kayley Hake
By Nora Bradford July 22, 2022

On a mild late-June afternoon in Woods Hole, Whitman Fellow Vincent Boudreau drives to Morse Pond, which sits next to an elementary school about a 10-minute drive from the MBL campus. Boudreau describes the pond as an unassuming place, but one that is very special to him. The same could be said of the organisms he collected in that pond back in 2015 that launched a scientific endeavor he is still exploring today.

The unassuming residents of Morse Pond he collects are giant cells called Stentor pyriformis. Despite being a single cell, S. pyriformis is able to accomplish some impressively complex tasks, like swimming toward light, feeding, and regenerating when wounded. But they don’t do all of this alone; each Stentor has several hundred photosynthetic algae living inside it. 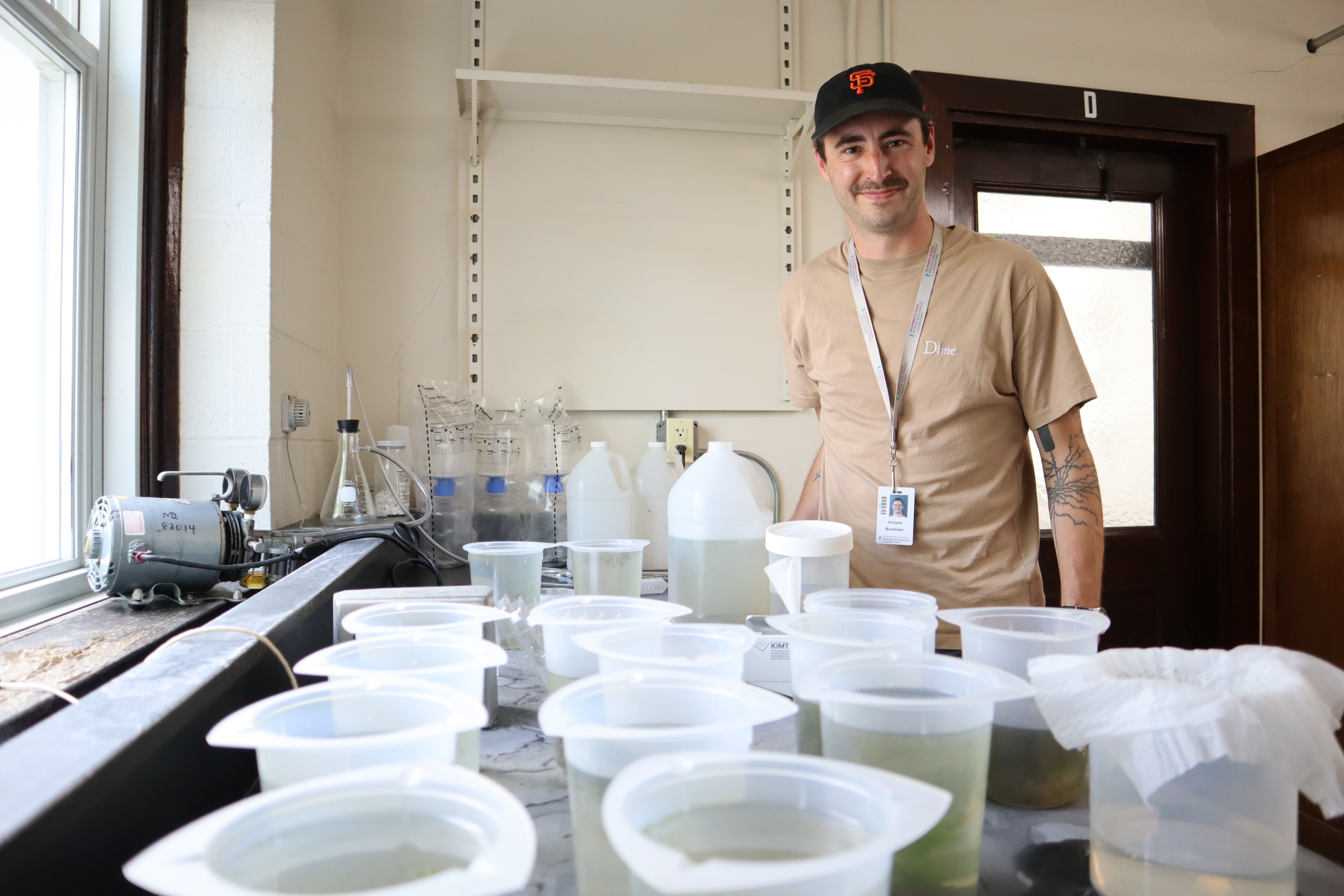 As a student in the 2015 Physiology course, Boudreau studied how the contents of S. pyriformis move around, also known as its cytoplasmic flow. The fluorescent algae inside served as a helpful tool in tracking this movement. While following the algae in a fluorescence microscope, Boudreau noticed something odd about their movement. Some of the algae were floating around in the Stentor, but many of them were hovering around the edges. Boudreau later realized that the single layer of algae is held to the edges of the cell by little tether-like structures. “I think of them as a solar panel of algae immediately within the inside of the Stentor,” says Boudreau.

After his discovery, Boudreau returned to MBL as a Physiology teaching assistant  for the following three years. During that time, he worked with students, who had expertise in everything from neurobiology to optics, to understand how this symbiotic relationship between S. pyriformis and algae works and to build tools to study it. 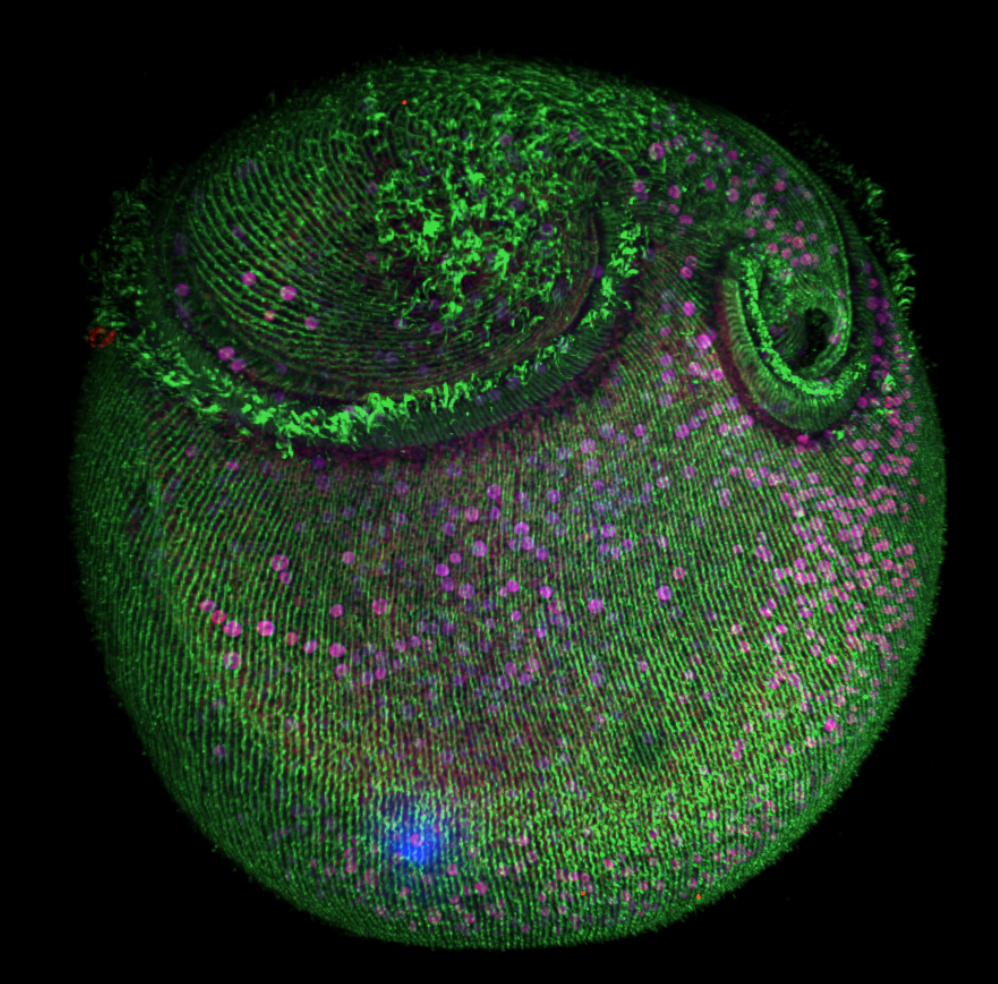 Stentor captured on an Andor Drangonfly confocal microscope. The green is the microtubule cytoskeleton, the blue is DAPI staining DNA and the magenta are the endosymbiotic algae. Credit: Victoria Yan

Boudreau, now a postdoctoral researcher at University of California, San Francisco and UC Berkeley, is back on campus this summer to investigate how the algae might direct Stentor to move in the direction of light, a behavior known as phototaxis. Because many of the algae are positioned near the edges of S. pyriformis, they are also close to the cilia that Stentors use to move around. Boudreau thinks that this positioning is no coincidence; the algae are likely influencing movement in the neighboring cilia.

In parallel to studying phototaxis, he plans to measure the algae's ability to photosynthesize within their Stentor hosts. At his home lab, Boudreau grew algae outside of the host and found that their efficiency of photosynthesis is similar to that of algae within Stentors. What’s different is the photoprotective mechanism that algae use to dissipate excess light energy as heat. (This helps Stentor avoid light-induced damage; a sort of molecular sunscreen.) Outside of their host, the algae are only able to weakly protect themselves, while algae inside of Stentor they have a very robust photoprotective system.

Boudreau’s hypothesis is that as Stentors move toward lit areas, the algae are able to photosynthesize efficiently, while also benefiting from photoprotective mechanisms inside Stentor that keep the algae from dying. He’s using various photosynthetic inhibitors, lighting conditions, and other manipulations to test how the phototaxis and photosynthesis change, and if the two change together.

This summer, Boudreau is also hosting the Symbiosis Summer School, which invites researchers from various disciplines to share their knowledge through lectures and collaborate on projects.

“It's been an exercise in opening up my science to more people,” says Boudreau. “I think in academics typically, people feel like they should have very strong ownership over their projects, but I've really taken the extreme opposite approach here. I’m bringing people in who don't work on this topic, and there's really good synergy when that happens.”