One of the most profound impacts on the biological sciences during the last half-century comes from new insights about genome architecture and underlying mechanisms of genome change. Two major contributions to this new genome understanding are the technical development of DNA sequencing / annotation procedures and the discovery of mobile genetic elements that have shaped genome structures and affected gene expression in important ways. Transposable genetic elements are specific gene sequences that can move or be copied from one site to another within a genome. Less often, they can move from one genome to another, a form of horizontal gene transfer.

Transposable element research originated in the 1940s with the ground-breaking work of Barbara McClintock on what she called “controlling” genetic elements in maize. However, it was not until the late 1960s that bacterial geneticists recognized the important role of insertion sequence elements as a major source of mutation in bacteria and their more general role as agents of genetic change. The next important milestones were the discovery of mobile antibiotic resistance genes and the elucidation of retroviral reverse transcriptase mechanisms in the 1970s. These latter discoveries demonstrated that transposable elements can have important medically relevant effects, led to the discoveries of multiple different transposition pathways, and stimulated an enormous output of transposable element research. Finally, the genome sequencing efforts have revealed the great impact of mobile elements on ever changing genome architecture. Almost all genomes contain some transposable elements, and in some organisms transposable elements or their remnants account for as much as one-half of genomic DNA (for example, they represent more than 40% of the human genome). Thus, if one is to understand genome structure and its evolution, one must understand transposable elements.

The Mobile Genetic Element Cluster at the MBL includes investigators who have established international reputations in transposable element research and together share a vision of this exciting field. Our research teams explore the basic science questions of how mobile genetic elements accomplish their movement and how that movement affects genome evolution. The Cluster’s studies also impact medically relevant questions and provide improved tools for genome research. The cluster participants are:

Dr. Matthew Meselson, Thomas Dudley Cabot Professor of Natural Sciences at Harvard University (Member of the American Academy of Arts and Sciences, the National Academy of Sciences, and the Institute of Medicine) and Adjunct Scientist at the MBL.

The cluster investigators are interested in two broad basic science questions: what are the molecular mechanisms that lead to genetic transposition and how do transposable elements impact an organism’s life style. In the process of addressing these questions we may also gain insights into related phenomena such as retroviral infection, antibody gene formation, RNA splicing, protein splicing, the evolution of sexual reproduction, and the lateral dispersal of transposable elements in the biosphere. 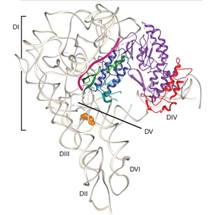 Drs. Belfort and Reznikoff investigate molecular mechanisms of transposition and its regulation for two very different types of elements. Dr. Belfort studies mobile introns and inteins, elements that interrupt genes and that are removed by RNA and protein splicing, respectively. Intron- and intein-encoded proteins promote movement of the elements to new sites on DNA by both DNA- and RNA-based reactions. 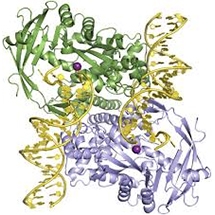 Dr. Reznikoff is interested in DNA transposition, in which the DNA sequence of the transposable element is cut out of a donor DNA molecule and inserted into a new site. DNA transposition is catalyzed by element-encoded proteins called transposases that are structurally and mechanistically related to retroviral integrases and to the immune system RAG-1 protein. 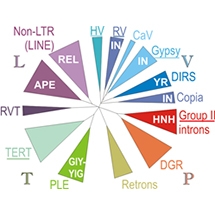 Dr. Arkhipova studies eukaryotic retroelements, which transpose via an RNA intermediate that is reverse transcribed and integrated into new chromosomal locations. She described a widespread class of retroelements that have an unprecedented ability to retrain introns after transposition, and may also be the evolutionary precursors of eukaryotic telomerase reverse transcriptases. Her studies of mobile elements in bdelloid rotifers led to the discovery of massive horizontal transfer of foreign genetic material into their genomes. She is broadly interested in the structural and functional diversity of reverse transcriptases and their distribution across the tree of life. 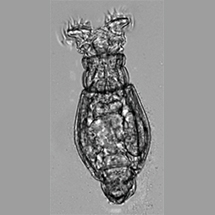 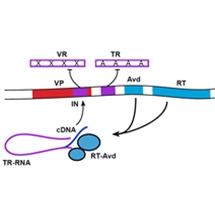 Dr. Paul studies bacterial and archaeal retroelements that can give rise to rapid protein evolution. Diversity-generating retroelements (DGRs) enable codon rewriting in target genes via error-prone template RNA reverse transcription and site-specific cDNA integration. Recently, DGRs have been associated with widespread uncultivated microorganisms from metagenomic surveys of marine and terrestrial ecosystems. Dr. Paul is also interested in the links between genomic variation and dynamic interactions in microbial communities, including those among kin, competing neighbors, and symbioses.

Transposable elements are relevant to important medical issues. One example of this relevance can be found in Dr. Reznikoff’s work. The transposase protein is structurally and mechanistically related to HIV-1 integrase, but the transposase is easier to work with and has better structural information available. Therefore, the transposase can be used as a surrogate for isolating and analyzing small molecule inhibitors of the integrase, with the eventual hope that one might serve as a lead compound for anti-HIV-1 therapy. Likewise, the reverse transcriptases encoded by the mobile group II introns studied by Dr. Belfort can be used as surrogates for developing drug targets against retroviral reverse transcriptases. The research of Dr. Arkhipova may help to evaluate the potential of retrotransposable elements to serve as replicative vectors for genetic transformation of invertebrates.

Transposable elements are powerful research tools for scientists interested in genomics, protein structure/function studies, etc. For instance, transposable elements can provide insertion mutation libraries that facilitate genetic function analyses. There are novel strategies based upon transposon biology that can map protein secondary structures and determine protein cellular locations. In addition, transposable elements can function as mobile primer binding sites for large-scale DNA sequencing operations. We have already seen transposons used in DNA sequencing at the Bay Paul Center of the MBL (Dr. Hillary Morrison), and the cluster investigators have plans for other applied transposition projects at the MBL.

It is a given in research that forming interactive scientific communities always generates synergy of efforts and exciting prospects for new research. The cluster represents a mix of investigators who are in complementary overlapping areas of research, work well together, and have a commitment to the MBL. Members of the cluster share expertise and methodologies and support each other’s work through the inevitable scientific exchanges. The long-term synergies would include joint research grants and projects and provide unique focused training opportunities for young investigators. In addition, the cluster can serve as a resource for the MBL summer courses and for other MBL resident and visiting investigators who wish to use transposable genetic elements as research tools.

There is no institution comparable to the MBL for facilitating collaborative biological investigation. This is because of its unique ability of attracting and housing short-term research projects. The cluster welcomes researchers working in the field to become associate members and to participate in any and all of the cluster activities. We also invite investigators from around the world to come to the MBL to pursue research related to mobile genetic elements.

Finally, one of the key scientific functions of the MBL is to act as an internationally recognized venue for research meetings. The MBL-based bi-annual regional Mobile genetic elements meeting facilitates contacts between transposon researchers from 8-10 states in the north-eastern quarter of the US, often attracting international participants, and provides an opportunity for graduate students and postdoctoral scientists to present their results in a series of informal talks. International scholars come to the MBL as Whitman investigators to pursue studies of mobile elements. All of the above activities result in broader dissemination of knowledge on the topic of mobile elements and position the MBL as an international venue for transposable element science.

Related Meetings at the MBL: