Since 1978, the Oceanic Flux Program (OFP), funded by the National Science Foundation (NSF), has continuously measured particle fluxes in the deep Sargasso Sea. The OFP is the longest running continuous time-series of its kind, and has produced a unique record of temporal variability in the “biological pump,” a term applied here to material transfer from the surface to the deep ocean resulting from the interplay between physical, biological and chemical processes. A detailed overview of the Oceanic Flux Program can be read in our 35 year anniversary article in the journal Oceanography, Volume 27(1): 142-147. 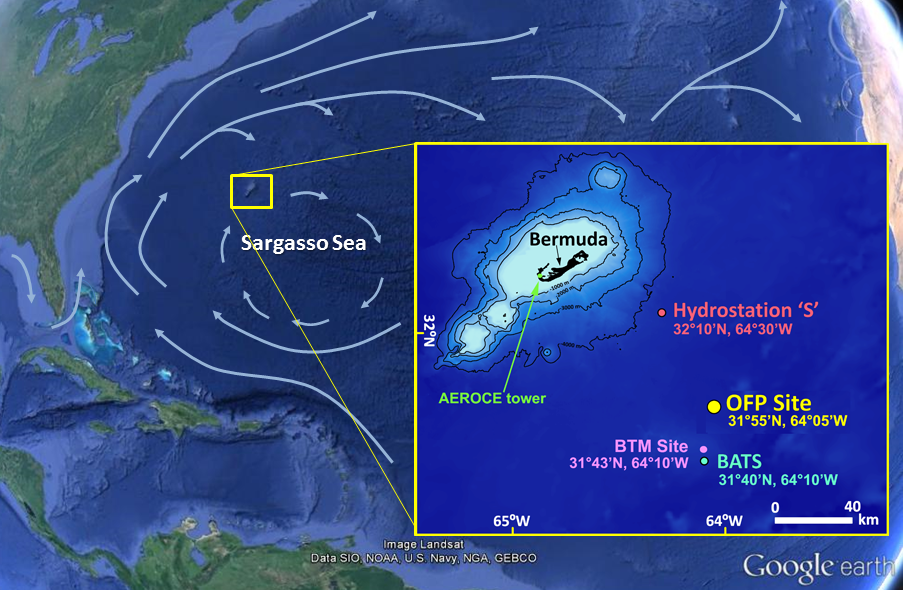 The OFP site is located 75 km SE of Bermuda, in the western part of the North Atlantic gyre. The hydrography is characteristic of a large expanse of the North Atlantic and sensitive to basin-scale variations. Other sustained measurement programs operating in the region are providing unparalleled opportunities to study the linkages between ocean physics, biology and chemistry and deep particle flux patterns. These include Hydrostation S (since 1954), the Bermuda Atlantic Time-Series (BATS, since 1988), the Bermuda Testbed Mooring (BTM, 1994-2007), and ongoing meteorological measurements at the former AEROCE site on Bermuda.

The OFP deploys a subsurface mooring anchored in 4500m of water with three McLane Research Parflux Mark 8 sediment traps located at 500m, 1500m and 3200m depths. These traps continuously collect the sinking particle flux at an approximate 2 week sampling resolution. The top of the mooring has an upward looking Teledyn-RDI Acoustic Doppler Current Profiler (ADCP) to measure currents in the upper 300m of the water column. There is also a SeaBird Electronics SBE37-ODO MicroCAT on the 500m trap to measure temperature, salinity and dissolved oxygen. Field methods and collection protocols are optimized for trace organic and elemental analyses.

The OFP time-series has contributed directly and/or conceptually to numerous scientific investigations to improve our understanding of ocean biogeochemical cycles. The OFP provided the first direct evidence for seasonality in the deep ocean and the tight coupling between deep fluxes and upper ocean processes. The OFP has elucidated the influences of meteorological forcing, upper ocean mesoscale physical variability and lateral advective processes on flux generation.

OFP results have provided clear evidence for the intensity of biological reprocessing of sinking flux in mesopelagic waters As the record gets longer, the OFP time-series is revealing how variability in particle flux on interannual and decadal time scales is affected by basin-scale climatic forcing such as ENSO and the North Atlantic Oscillation (NAO) and changing ocean chemistry such as ocean acidification.

Why study deep particle flux?
Sinking particles carry with them many different elements and organic compounds. Some elements in the sinking flux are essential to support life. The depths at which these are dissolved and then redistributed by ocean currents to rise again to the surface controls nutrient distributions that regulate the ocean’s productivity, the global cycles of many elements, and the rate at which oceans can absorb carbon dioxide from the atmosphere.

Sinking organic debris, and what is left behind by vertical migrating zooplankton, provides the food that fuels most life below the sunlit surface of the ocean. The residual material that survives to be deposited on the seafloor and preserved in the sediments retains a rich record of past ocean conditions that is used to reconstruct the earth’s history.

All sample collection and sample processing protocols used by the OFP have been optimized to enable trace level organic and inorganic investigations of the recovered flux composition. Following a mooring recovery and redeployment operation, the samples are brought back to the lab at MBL for processing. Any macrozooplankton "swimmers" in the samples are photographed, removed, documented and preserved. The <1mm fraction is quantitatively split using ultra-clean techniques in a laminar flow hood, allowing for a diverse set analyses. 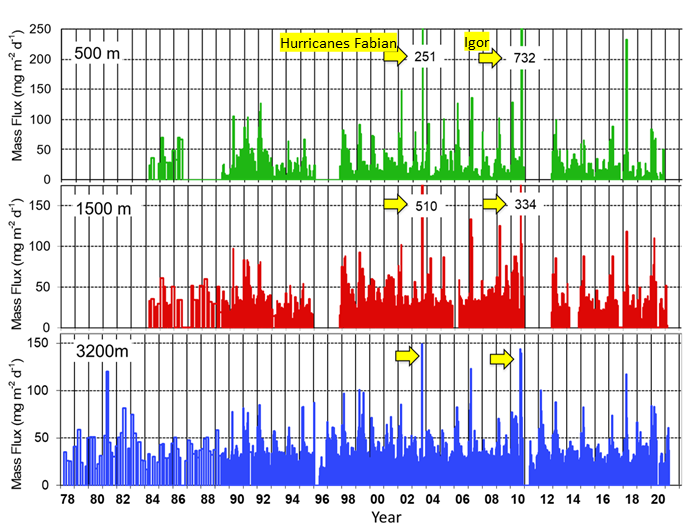 60% of the sample is recombined and size-fractionated for microscopic observations and flux determination. The larger fractions (>1000µm, 500-1000µm, 125-500µm) are quantitatively photographed using a stereo microscope equipped with a resolution camera under optimized illumination conditions. Images are available for “virtual analysis” of the particle flux components. The <125µm fraction, representing the bulk of the material, is freeze-dried. Core analyses of mass, carbonate, organic carbon and nitrogen (abundance & isotopic composition), phosphorus and biogenic & lithogenic silica concentrations are conducted.

30% of the sample is preserved for organic analyses. Phytoplankton, zooplankton and bacteria each produce unique lipid biomarkers that can serve as a forensic tool in understanding the sources and fate of the biogenic material in the sinking flux.

10% of the sample is preserved for trace-level elemental analysis. Patterns in the distributions of the lithogenic and biogenic trace elements can yield clues about particle sources and processes controlling flux variability on different time scales.

OFP samples, both physical sub-samples and virtual photoscans, are available for collaboration with other researchers around the globe.

Conte's research is supported by collaborative projects through the MBL and her home affiliation, the Bermuda Institute of Ocean Sciences (BIOS).