The Core Aquatic and Terrestrial Ecosystems Courses
The SES program emphasizes learning by doing – students spend over 20 hours each week in the lab and field investigating forests, ponds and estuaries on Cape Cod. Virtually all ecosystems have been impacted by human activity, and so this is also a curriculum about how human-caused changes in the environment are affecting the globe.

Core course lectures cover both aquatic and terrestrial ecosystems from the point of view of biogeochemistry and important ecological processes. Course research takes place in local ecosystems — ponds and estuaries within the Waquoit Bay watershed adjacent to Vineyard Sound, West Falmouth Harbor on Buzzards Bay, and grassland, forest and suburban sites in the towns of Mashpee and Falmouth. Read more about the four credit aquatic course and the terrestrial course.

Terrestrial Fieldwork Sites
Terrestrial fieldwork is conducted in grassland, forest and suburban habitats in the Crane Wildlife Management Area in Mashpee and other sites in Falmouth. The sites are chosen to represent a disturbance chronosequence and allow comparison of ecosystems processes, such as primary production and nitrogen mineralization, and properties such as standing stock, plant diversity and soil carbon and nitrogen content across the disturbance gradient. 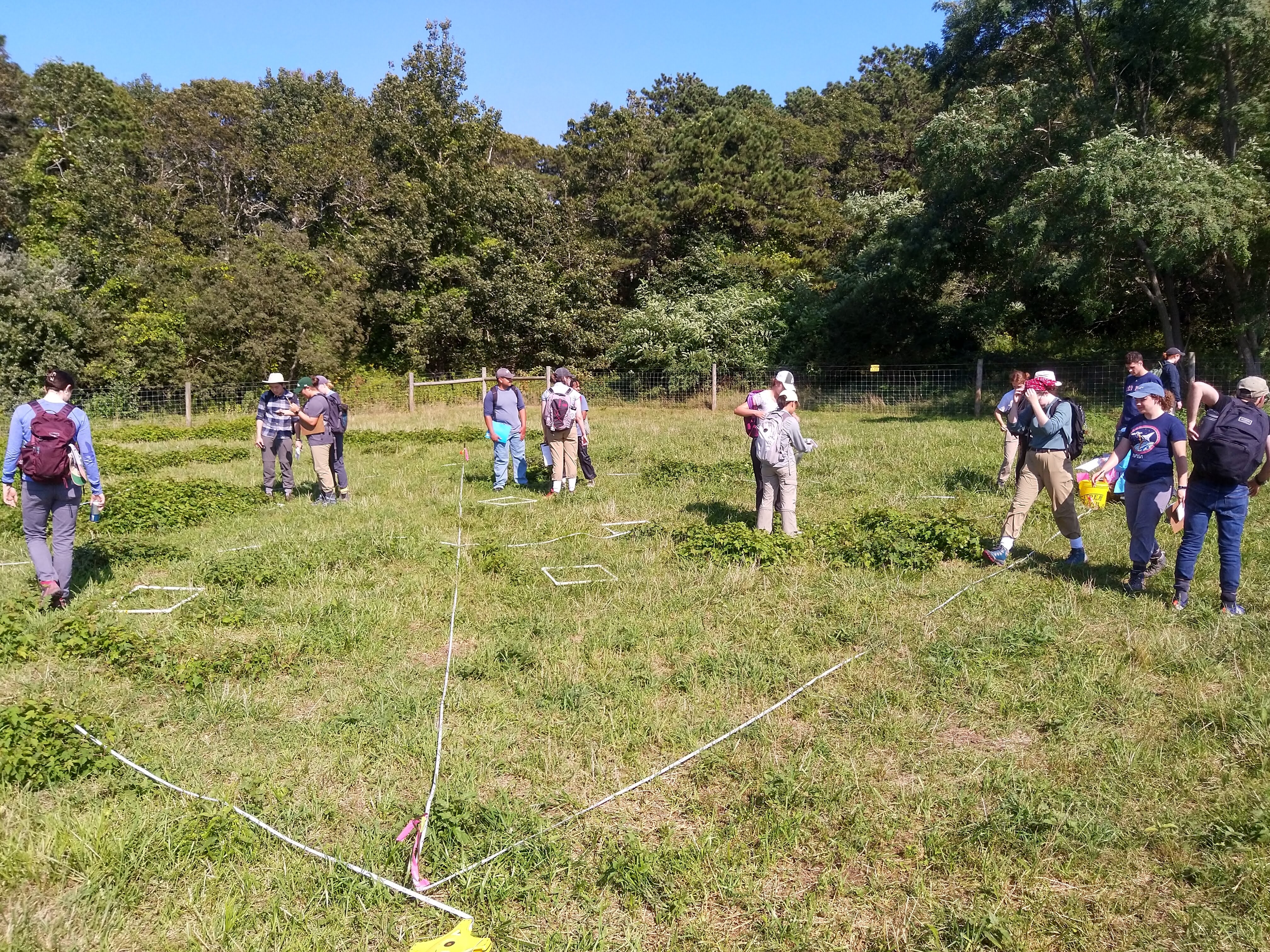 West Falmouth Harbor: Small salt water embayment adjacent to Buzzards Bay on the west coast of Falmouth that is impacted by the plume from the Falmouth Wastewater Treatment Plant.

Child’s River/Waquoit Bay: This is a system of small estuaries on the outwash plain along the south coast of Falmouth. This site has been eutrophied by groundwater contaminated with nitrogen from septic systems in densely settled sections of the watershed, resulting in the disappearance of eel grass in this system.

John’s Pond: A freshwater kettle hole pond with a deep basin (~ 20 meters) that is seasonally stratified. 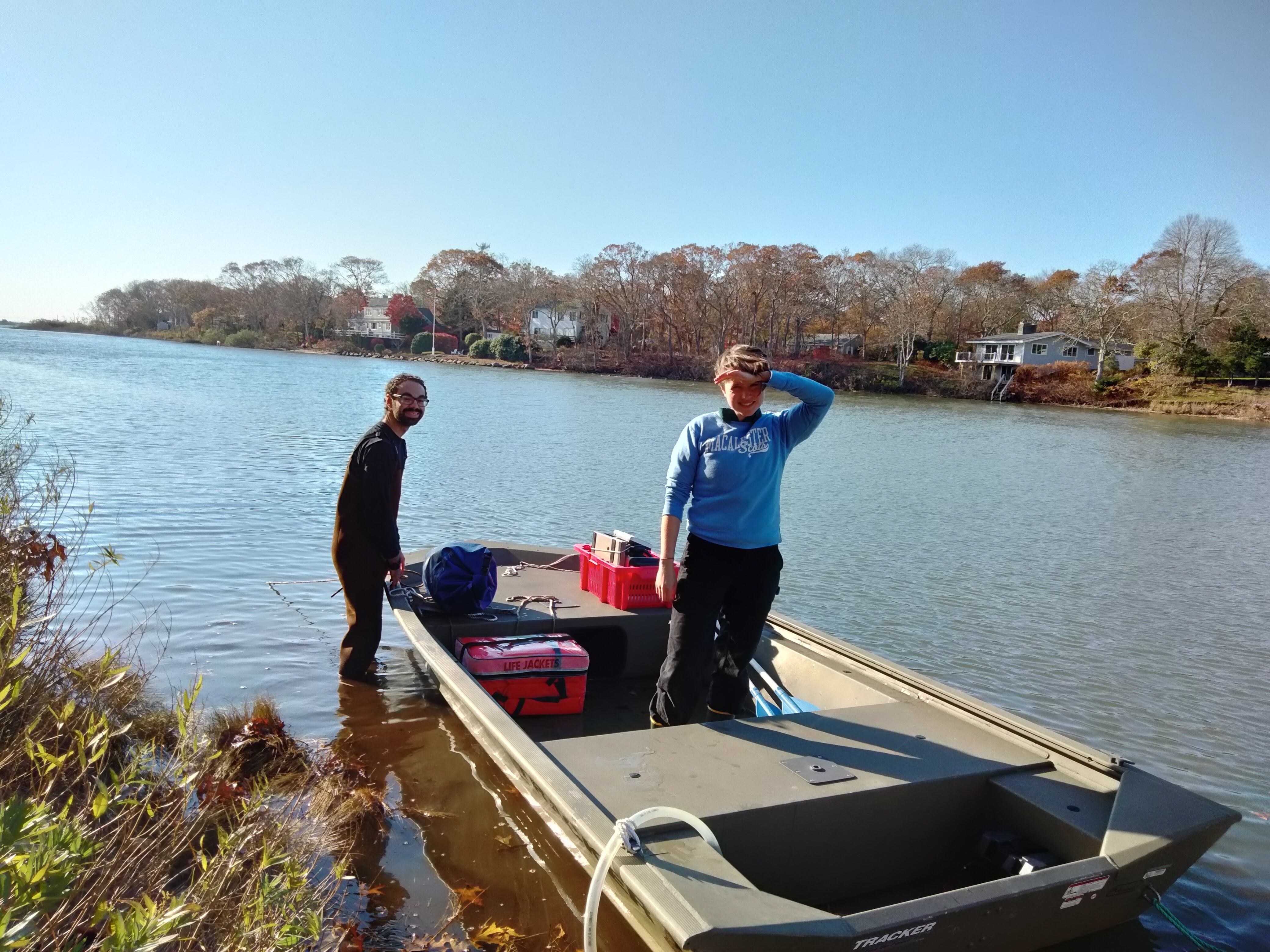 In addition to the Core Courses, SES students take one four credit elective which meets twice a week. The elective is intended to deepen understanding in a specific sub-discipline of ecosystems science. Choose from Mathematical Modeling or Microbial Methods.

Ecology is a relatively young science that grew from the largely descriptive discipline of Natural History. As the science has matured, it has begun to develop a firm quantitative foundation. For the most part, this foundation has been statistical (Regression, Correlation, Analysis of Variance, Ordination). The purpose of this course is to introduce the students to the other component of this quantitative foundation, dynamic simulation modeling of ecological processes.

The students will first be exposed to the role of models in science and the relationship of models to scientific theories. Then the basics of calculus are reviewed in the context of the mass-balance concept. Next the students are introduced to numerical (as opposed to analytical) solutions of the mass-balance equation; that is, they are taught how to get a computer to do all the hard math. They then apply these techniques to a series of examples like the growth of an individual organism and of a population of organisms, the interactions within species communities (competition for resources, predator-prey systems), the cycling of elements within ecosystems, the hydrology of a watershed, and an analysis of the CO2 balance of the atmosphere.

The students will use what they learn over the course of the semester to develop their own simulation model of an ecosystem. They are provided with a model shell that includes a Windows™ interface, integrator, and graphical-output package. The student then provides a set of equations describing the ecological processes they want to simulate. These equations are typically based on the simple concept of a mass balance and can be applied to ecosystem element cycles, population dynamics, or community interactions.

Required Text
Students will be assigned chapters from selected texts and papers from the primary literature.

What to expect
The students will complete about six programming problems that illustrate the topics covered in lecture. Students will be evaluated predominantly on a term project. In that project they will develop their own simulation model, address some ecologically significant question with the model, and write a manuscript describing the model and analysis. The manuscript is to be written as if it were to be submitted to a scientific journal (e.g., Ecology). Students are encouraged to relate their project to topics covered in other courses, and may use the model they develop as part of their independent research project undertaken during the last four to six weeks of the semester. Students are encouraged to discuss their projects with one another during the semester and seek one another’s advice. In addition, each student will make an oral presentation describing her or his project to the class.

The usual methods of microbiology were developed to study microbes affecting human health (Lynch and Hobbie 1988). When these methods are used for field studies they have many problems; to begin with, less than one percent of the bacteria found in a sample of ocean water will grow on laboratory petri plates. Recent methodological advances, such as the application of fluorescently-labeled immunochemical or nucleic acid probes, provide a new way to taxonomically identify individual cells in the mixed populations of soils and waters. Yet, the application of these methods is limited to the detection of physiologically active cells with a large number of ribosomes, a rare occurrence in nature. Despite these and other problems, ecological microbiologists have developed a number of methods for enhancing our ability to measure the activities, abundances, and types of microbes found in soils, waters, and sediments of natural systems (e.g., the methods book of Kemp et al. 1993).

In this course, we will present the scientific rationale behind a number of methods suitable for determining the role of microbes in ecosystems. The methods will be described and students will carry out the procedures in a series of hands-on laboratories. One theme will be choosing methods and temporal and spatial scales appropriate to the question being asked (e.g., the review by Pearl and Pinckney 1996). The course will be taught, under the leadership of Joseph Vallino, in collaboration with scientists from the Ecosystems Center, the permanent staff of the Marine Biological Laboratory, and other Woods Hole institutions.

Lectures will describe the biology and logic that underlie the various methods used by microbial ecologists. In the laboratory, students will work with the latest techniques to measure microbial biomass, activity, extracellular enzymes, biogeochemistry and species diversity. These include epifluorescence microscopy, radioisotopic tracers for bacterial production, fluorescent substrates, hydrogen sulfide and methane production, and molecular probes for classes of bacteria. Students will be required to turn in answers and calculations to problem sets that are associated with each lab topic. These problem sets will form the basis of the grade. In addition, students will be asked to present their laboratory results and participate in group discussions on the findings by the entire class. Students will be encouraged to use the methods developed in this course for their individual research projects associated with the SES course.

For more information go to the Microbial Methods in Ecology website.

The structured laboratory experiences and techniques of the core courses and electives set the stage for the most rewarding part of the SES program, the Independent Research Projects (4 credit course). During the last five weeks of the course, students will be able to devote full time to a project of their choosing.

Opportunities and Past Projects Here

SES students all take part in a one credit seminar that introduces the art of science writing. This course is taught by Claudia Geib, freelance science journalist and producer of the podcast Gastropod, with the help of guest experts across the science writing industry. The goal is to help students understand how scientific work can be made more accessible to the public, and to produce writing that engages readers as well as educates them. Students will interview pre-eminent scientists, learn to write short news stories, and work to produce a long-form feature of their choice as a final project. Along the way, they'll learn from podcast producers, documentary filmmakers, investigative journalists and institutional science writers who can share their experience and expertise in this diverse field. With this and other programs at the Marine Biological Laboratory, we hope to begin training a new generation of writers who can communicate critical scientific and environmental issues with the public.

Because of the diversity of curricula at the schools participating in the Environmental Science Consortium, we are providing a description of the knowledge we hope students will have, rather than specific course requirements. We recommend courses in general biology, chemistry and calculus or statistics.