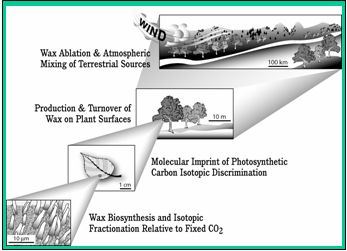 Our research group has developed a compound specific biomarker technique utilizing ablated leaf wax particles in aerosols to directly measure terrestrial photosynthetic discrimination on large spatial scales. During plant wax biosynthesis, the molecular components (fatty acids, alcohols, hydrocarbons) are isotopically fractionated relative to the fixed CO2 becoming a molecular imprint of plant’s photosynthetic carbon isotopic discrimination (Δ). Waxes on the surface of the plant’s leaves are subsequently eroded and sloughed off (like “leaf dandruff”) as they are replaced with newly formed waxes reflecting the latest isotopic signal. These micron-sized ablated wax particles are picked up by wind, mixed in the atmosphere, and transported great distances with their molecular signals intact. 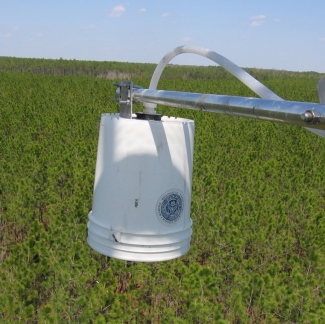 This technique allows for the relatively simple estimation of Δ integrated over large regional scale scales, using the isotopic composition of the ablated plant wax aerosols accumulated in continental air-masses. Other terrestrial plant-derived organic compounds also found in aerosols provide additional information about terrestrial ecosystem functioning. Air mass back-trajectory models (NOAA HYSPLIT) are used to estimate the statistical “footprint” of the continental source regions of the aerosols we sample. Our studies of biogenic aerosols have taken us to many research sites around the globe: Bermuda, Barbados, Alberta, Maine, Alaska, Florida and French Guiana.

To better understand the linkages between plant ecosystems and their aerosol signals, we have conducted field studies in a diverse array of ecosystems, partnering with many talented and insightful terrestrial ecologists and plant physiologists. These “ground-truthing” studies have led us on expeditions to the prairies of western Canada, the arctic tundra of Alaska, the ecotonal boreal forests of Maine, the southern pine stands of central Florida, and deep into the heart of the Amazon rainforests of French Guiana.

Our studies have verified that the isotopic fractionation of the carbon in the local vegetation is effectively imprinted in the wax carbon and accurately reflected in the aerosols collected with our portable globe-trotting air sampler mounted just above the plant canopy. The local vegetation also has distinct molecular (carbon chain length distribution of wax components as well as other unique biomarker compounds) and isotopic signatures. This organic biomarker signal in the aerosols can also capture events such as biomass burning. Conducting multiyear collections of both aerosols and vegetation at these sites has revealed that environmental variability, such as stress during drought conditions, can be deduced using the carbon isotope fractionation. Our field investigations of the vegetation in these ecosystems has also raised interesting questions and insights into plant wax biosynthesis and physiology.

Plant leaf waxes and other compounds preserved in sediments are valuable molecular fossils that provide abundant information about the earth’s past climates. Expanding upon our research on waxes in the air, plants and soils of the Amazon rainforest, we recently made an expedition to collect sediment cores from the remote Lac Toponowini in the highlands of southern French Guiana, formed by a landslide several thousands of years ago.

Below are a photo and X-radiograph of a section of Toponowini sediments from 1-2 m depth, spanning an age range of 1000 to 2000 years. The striations show near annual variations in sediment composition. Studies of the pollen, charcoal, chemistry and molecular fossils in the Lac Toponowini sediments promises to reveal an unsurpassed record of climate variability of the northeastern Amazon over the late Holocene period.

This research is being conducted in collaboration with scientists from the Paleoecology Group at Florida Institute of Technology, the French Centre National de la Recherche Scientifique’s (CNRS) centers in Bordeaux and Gif-sur-Yvette, and the Molecular Stratigraphy group at Brown University.

Research in Ecosystems Around the Globe… 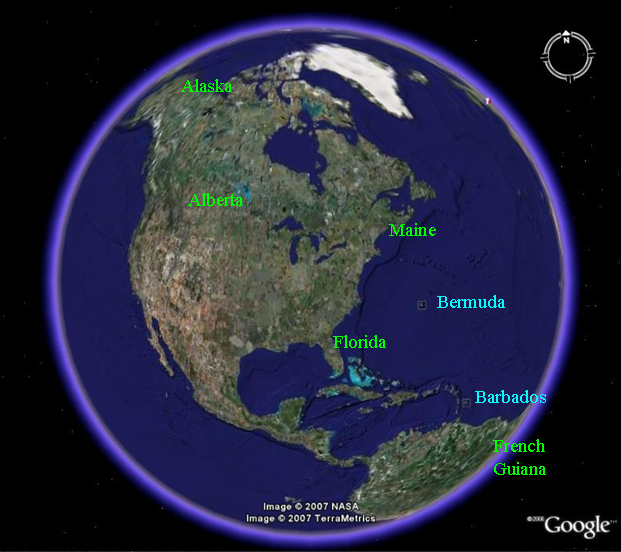