The 12-member panel, formed at the request of John Holdren, director of the White House Office of Science and Technology Policy and Subra Suresh, director of the National Science Foundation, is tasked with examining the status and capabilities of the U.S. Antarctic Program (USAP) to ensure that it continues to support the most relevant and important science in the most effective, efficient, sustainable, technologically advanced, innovative, safe, and environmentally-friendly manner. 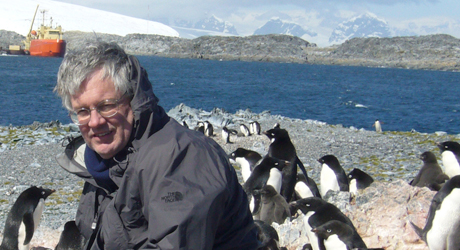 Hugh Ducklow with Adélie penguins on Torgersen Island, the site of long-term studies of penguin ecology and populations as part of the Palmer LTER. Credit: Noelle Yochum.

Ducklow and his co-panelists are assessing USAP operations, logistics, and management and are charged with recommending a long-term strategy regarding USAP support in Antarctica and the Southern Ocean in anticipation of the upcoming renegotiation of the Antarctic Treaty. Signed in 1959, the Treaty’s main purpose is to ensure "in the interest of all mankind that Antarctica shall continue forever to be used exclusively for peaceful purposes and shall not become the scene or object of international discord."

The panel expects to make its report to the White House and NSF in 2012 after further visits to stateside USAP facilities and Palmer Station. Ducklow will travel to Palmer Station next week, his third trip to Antarctica in the past two months. “That’s a lot, but it’s really important,” says Ducklow. “The USAP has some critical decisions to make for the U.S. research agenda, and I’m glad to help.” Ducklow has been on the MBL’s scientific staff since 2007. A biological oceanographer and expert on polar climate change, Ducklow’s research focuses on the roles the ocean carbon cycle and the responses of marine ecosystems to rapid climate warming.

The MBL is a leading international, independent, nonprofit institution dedicated to discovery and to improving the human condition through creative research and education in the biological, biomedical and environmental sciences. Founded in 1888 as the Marine Biological Laboratory, the MBL is the oldest private marine laboratory in the Americas.