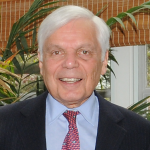 It is with sadness that we share the passing of MBL Society Member and Trustee Emeritus Charles M. Rosenthal who died on April 10, 2019 following a brief illness. The MBL flag will be lowered to half-mast in his memory.

Mr. Rosenthal was a Senior Managing Director at First Manhattan Company where he spent more than four decades of his career. Before joining the firm, he was an Economist at the Federal Reserve Bank.

Mr. Rosenthal was a MBL Trustee from 2005 to 2016 and served as Vice-Chair from 2015 to 2016. During his tenure as Trustee, he was a member of the Catalyst Campaign Executive Committee and Nominating and Governance, and Executive Committees.

In 2010, a generous gift from Mr. Rosenthal and his wife, Phyllis, launched the Brown-MBL Partnership, an outgrowth of the Brown-MBL Graduate Program in Biological and Environmental Sciences. The effort generated new joint research ventures, strengthened graduate education, and enriched academic offerings between Brown University and the MBL. The Rosenthal’s leadership and support had a tremendous impact on environmental and ecological science research at the MBL and beyond.

In addition to his work with the MBL, Mr. Rosenthal was a Trustee Emeritus of Brown University and Trustee of Carnegie Hall. He received his BA from Colgate University and served as a Captain in the U.S. Air Force from 1957 to 1960.

An obituary published in The New York Times can be viewed here.