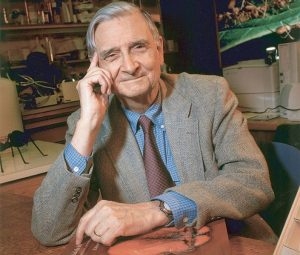 It is with sadness that we share the passing of former MBL Trustee Edward O. Wilson who died on December 26, 2021 at the age of 92. The MBL flag will be lowered in his memory.

Edward O. Wilson was a giant in the field of biology and one the world’s leading experts on insects and biodiversity. Over his decades-long career, Wilson discovered how ants communicate with one another, shone a light on the very fundamentals of natural selection, and was among the first to understand the evolutionary basis of both animal and human societies. He was also a beloved member of the MBL community.

Wilson was a Harvard University professor for 46 years. During that time, and after his retirement in 2002, he authored more than 430 scientific papers, published more than 20 books on the natural sciences, and won two Pulitzer Prizes.

Friday Evening Lectures are a quintessential MBL tradition, given each and every summer since our founding in1888. Wilson gave three Friday Evening Lectures, delighting the Woods Hole scientific community over the course of three decades: “Theory and Experiment in Zoogeography”(1969), “The Organization of Insect Societies” (1979), and “Analyzing the Superorganism: The Legacy of Whitman and Wheeler” (1988).

Read more about E.O. Wilson and his contributions to science

E.O. Wilson, a Pioneer of Evolutionary Biology, Dies at 92 | The New York Times

E.O. Wilson’s lifelong passion for ants helped him teach humans about how to live sustainably with nature | The Conversation

E.O. Wilson, evolutionary biologist who changed how we look at the world, dies at 92 | The Boston Globe

E.O. Wilson Obituary – US biologist and champion of biodiversity who specialised in the study of ants and was regarded as a modern-day Charles Darwin | The Guardian

Edward O. Wilson, PhD – The Father of Sociobiology | The Academy of Achievement