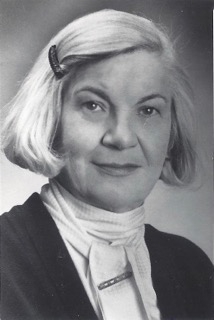 An obituary provided by her family is below.

Betsy was the daughter of Dr. Frank and Ava Clark of Abingdon, Virginia, and was the youngest of seven children, hence her family nickname, Bitsy.  Her father established a Presbyterian mission school in Grundy, Virginia, where Betsy was born, and the importance of education was imbued in the family.  Her childhood on the family farm and her love of nature led to her lifelong passion for science.

Betsy graduated Phi Beta Kappa in biology from Mary Washington College.  She received her doctorate in developmental biology from the University of North Carolina at Chapel Hill.  She was a postdoctoral fellow in the Department of Microbiology at Washington University in St. Louis, Missouri and in the Biochemistry and Virus Laboratory at the University of California, Berkeley.  She went on to become the first woman appointed to the faculty in biology at Columbia University where she taught and did research until 1969.

Betsy was appointed by President Ford to the National Science Foundation.  In her roles at NSF, she helped shape national science policy serving in positions of increasing responsibility, until her resignation as Assistant Director of Biological, Behavioral and Social Sciences in 1982.  After her retirement from government, Betsy became Provost, Vice-President for Academic Affairs, and Professor of Biological Sciences at Bowling Green State University in Ohio.

Among her many academic and public interest contributions, Betsy served as President of the American Association for the Advancement of Science and was on the executive committee of the Phi Beta Kappa Society.  She was honored as a Distinguished Alumna of Mary Washington College.  She served on the Board of Trustees of the Marine Biological Laboratory in Woods Hole, Massachusetts and had fond memories of her long association with MBL and great summers on Cape Cod.

After retirement, Betsy moved to Asheville and loved being back in the mountains.  While her academic and governmental contributions are notable, they represent only one aspect of her remarkable life.  She was a social and environmental activist and supporter of the underdog.  She loved, in no particular order: bridge, opera, great clothes, gardening, golf, wine, friends and family.  She was elegant and involved and generous beyond measure.  She is survived by her sister, Ava Spencer of Davidson, North Carolina, her many nieces and nephews, who were such a part of her life, and by her many friends.

A memorial service will be held Saturday, October 14th at Green Spring Presbyterian Church in Abingdon, Virginia.  In lieu of flowers, a donation to one of Betsy’s favored charities, The Nature Conservancy or Marine Biological Laboratory is suggested.