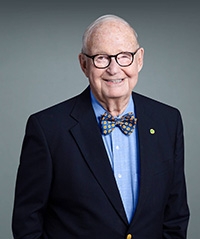 It is with deep sadness that we share the passing of MBL Trustee Emeritus and MBL Society Emeritus member Gerald Weissmann, who died July 10, 2019 at the age of 88. He was a long-time MBL supporter, scientist, library patron, and an integral member of the MBL community for more than five decades. The MBL flag is currently inoperative but will be lowered to half-mast in Dr. Weissmann’s memory when repaired.

Dr. Weissmann was an accomplished scientist, editor, and essayist. He was Professor Emeritus and Research Professor of Medicine (Rheumatology) at New York University School of Medicine. He was an MBL Trustee from 1987 to 2009 and during that time served on numerous committees. He was vice-chairman of the highly successful Discovery Campaign Steering Committee from 1997 to 2000.

Dr. Weissmann’s research focused on the mechanisms of inflammation and the pathophysiology of autoimmune disorders. He is best known for the co-discovery and naming of model structures called liposomes, which were subsequently successfully developed as a drug delivery system. He was a founder (with E. C. Whitehead) and a director of The Liposome Company, Inc., from 1982 to 2000, and two drugs based on his liposome work are now used in the clinic. He also conducted research at the MBL in the 1980s on marine sponge aggregation that led to new treatments for rheumatic diseases and showed how aspirin-like drugs worked.

Dr. Weissmann also served the MBL as a member of the Physiology course faculty from 1972 to 1976. For the last two decades, Dr. Weissmann was a Reader in the MBLWHOI Library and up until his death was active in library talks and programming, including organizing the panel discussion “Two Cultures in the Age of Twitter: Reconsidering the Scientific/Literary Divide 60 Years After C.P. Snow,” to be held July 30 at the MBL.

Dr. Weissmann is survived by his wife Ann, his children Lisa and Andrew, his daughter-in-law Debra, and grandson Ben.

A private funeral will be held for Dr. Weissmann’s immediate family.  A larger gathering will be held at his family home in New York in the near future. Donations in his memory may be made to the Marine Biological Laboratory and the American Civil Liberties Union.

An obituary provided by his family can be found below.

Dr. Weissmann was a renowned rheumatologist, esteemed New York University Medical School Professor, and beloved, husband, father, and grandfather.  Born in Vienna, Austria, his family fled the Nazis when he was 8 and settled in New York City thanks to the assistance of Eleanor Roosevelt, among others.  There, he attended Bronx High School of Science and Columbia College.  Like his father, he went into medicine, graduating from New York University College of Medicine in 1954.  Dr. Weissmann  completed a fellowship in Rheumatology at NYU Medical School and then spent several years as a special research fellow, under the direction of Dr. Lewis Thomas at NYU Medical School and Dr. Honor Fell at Strangeways Laboratory in Cambridge England.  Dr. Weissmann joined the faculty of  NYU Medical School as an Assistant Professor in 1962 and became a Full Professor in 1970 in the field of Rheumatology.   He served as the school’s Director of the Division of Cell Biology and Rheumatology for three decades.  During that time he mentored scores of medical students, residents, and fellows, and was known fondly for his rigorous intellectual curiosity and his humor.  His students have gone on to become leaders in their fields of medicine throughout the country.  The Weissmann family sponsors the yearly Gerald Weissmann lecture in rheumatology at NYU Medical School, which is given by and for rheumatologists from all over the world.  Dr. Weissmann also served his country as a Captain in the Army Medical Corps from 1955 to 1957 on active duty, and in the reserves from 1957-1964.  In addition to producing scores of research papers, Dr. Weissmann followed in the footsteps of his mentor Lewis Thomas and published numerous humanistic essays on science and society, beginning with his first collection The Woods Hole Cantata in 1985.  A relentless writer and thinker, his eleventh book of essays, The Fevers of Reason, appeared last year, when Dr. Weissmann was 87.

Dr. Weissmann’s research focused on the mechanisms of inflammation and the pathophysiology of autoimmune disorders.  He is responsible for the codiscovery of liposomes in 1965 and credited with coining that name.  He was a founder (with E.C. Whitehead) and a director of the Liposome Company, Inc. from 1982 to 2000, and two drugs based on his liposome work are now in the clinic (Abelcet and Myocet).  Liposomes have been recognized as “one of the most successful drug delivery systems (DDS) given their established utility and success in the clinic in the past 40-50 years.”

During his long career, Dr. Weissmann received numerous awards and scientific honors for his professional achievements.  These include the Presidential Gold Medal, the Klemperer, and the Distinguished Investigator awards from the American College of Rheumatology; the Marine Biological Laboratory Centennial Award; the NIH Merit award; the Hiram Maxim Award for Scientific Communication; and the “Research Hero” award from the Arthritis Foundation.   He was a trustee on the Board of the Marine Biological Laboratory, President of the Harvey Society, President of the American College of Rheumatology, and Chairman of the Prix Galien, International, among many other professional societies of which he was a member.  He was a member of the PEN American Center, and served as Editor-in-chief of numerous scientific journals: The FASEB Journal, Inflammation, MD Magazine, and Advances in Inflammation.

He met his wife Ann in 1948 when he was a freshman in college and they dated throughout college, commuting along the Hudson River between Columbia and Vassar.  After the antithesis of a whirlwind courtship, they married in 1953 and raised their children Lisa and Andrew in New York City and Woods Hole, Massachusetts.  He is survived by Ann and his children, his daughter-in-law Debra, and grandson Ben.  He will be missed for his brilliant mind, his erudition, his warmth and equanimity, and his inexhaustible efforts to pun.  A private funeral will be held for Dr. Weissmann’s immediate family.  A larger gathering will be held at his family home in New York in the near future.  Donations in his memory may be made to the Marine Biological Laboratory and the American Civil Liberties Union.