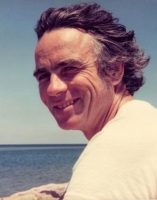 With great sadness the MBL shares the passing of John Wilson Moore, MBL Society Emeritus Member and Professor Emeritus of Neurobiology at Duke University, on March 30, 2019, at the age of 98. The MBL flag will be lowered to half-mast in his memory.

Moore was a biophysicist who made important contributions to understanding neurotoxins and the action of anesthetics and was a pioneer in the field of computational neuroscience. His digital textbook Neurons in Action, co-authored with his wife after his retirement, is widely used nationally and internationally. Moore first came to the MBL to lead K.S.Cole’s lab in 1951.  From then until the end of his life, Moore returned to the MBL every year, 67 summers in all.  He considered the MBL his intellectual home. He was a Whitman Investigator, taught in the Biophysics course in the 1970s, and served several terms as Trustee in the 1980s.  He was proud of urging the Trustees not to sell MBL land, particularly the parcel that is now the Devil’s Lane parking lot.

When boardsailing began, he was an early adopter at age 60 and continued sailing in Woods Hole waters until age 80.  He was known in Woods Hole for his loud, smelly, bright orange VW bus called Van Go—loaded with windsurf gear (and constantly breaking down). At the MBL he was known for his principled stand on issues. Friends enjoyed his quirky sense of quick humor, his kindness and generosity, and his gracious, welcoming smile.

Dr. Stephen G. Waxman of Yale University said of John: “John was so special — as a friend, as a mentor, as a collaborator, and as an intellectual giant. The scientific challenges that he fought make what we do now look easy.  And always a source of no – nonsense, sensible truth.   And, he wrapped up his incredible mental prowess into a personage that made everyone feel comfortable and welcomed. Always! What a very special, wonderful person.”

A memorial service is scheduled for Saturday, July 20, at 3PM at the MBL.

A Duke obituary may be found here.