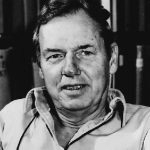 It is with sadness that we share the passing of Society Emeritus Member and former Trustee Kensal E. van Holde, Professor Emeritus at Oregon State University, who died November 9, 2019. The MBL flag will be lowered to half-mast in his memory.

Dr. van Holde was a member of the MBL Board of Trustees from 1979 to 1982 and again from 1984 to 1991. His fascination with the MBL and a love for Woods Hole led the van Holde family to return nearly every summer for more than 40 years.

The endowed Kensal E. van Holde Lectureship in Physiology is held each at the MBL in his honor. Read more here.

A memorial service celebrating his life will be held in the late winter. Read obituary published in the Corvallis Gazette-Times.