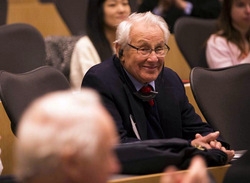 With sadness we share the passing of MBL Society Emeritus member Dr. Laszlo Lorand, who died December 6, 2018 at the age of 95. The MBL flag will be lowered to half-mast in Dr. Lorand’s memory following the 30-day flag lowering in memory of former President George H.W. Bush.

Dr. Lorand was a Professor Emeritus of Cell and Molecular Biology at the Feinberg School of Medicine at Northwestern University.  His research was in the area of thrombosis, protein associations, and calcium ions and is considered to have had a major impact in the field of blood coagulation.

He received an absolutorium in medicine from the University of Budapest and a Ph.D. in Biomolecular Structure from University of Leeds.  He taught Physiology and Pharmacology at Wayne State University School of Medicine prior to joining Northwestern.

Dr. Lorand was a long-time member of the MBL summer research community and a Woods Hole summer resident.  He served on the MBL’s Board of Trustees from 1987 to 1991 and was a faculty member in the MBL Physiology course.  He was an elected Member of the National Academy of Sciences, a fellow of the American Academy of Arts and Sciences, and a foreign member of the Hungarian Academy of Sciences. He received numerous awards and honorary degrees throughout his career and was the author of more than 200 scientific publications.

In this 2013 video produced by the MBL History Project, Dr. Lorand discussed his early years at the MBL, the impact that the institution made on his personal and professional lives, and working with Nobel Prize winner Albert Szent-Györgyi.

An obituary written by his family can be viewed here.

Memorial donations in his memory to the MBLWHOI Library may be made online by clicking here and typing “MBLWHOI Library” in the comments/notes section and entering the name Laszlo Lorand in the Tribute section.