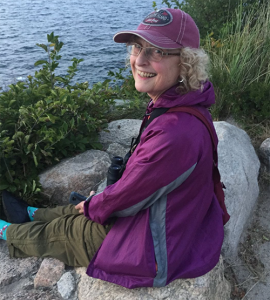 It is with sadness that we share the passing of MBL Society Emeritus Member Louise Luckenbill who died on November 17, 2020. The MBL flag will be lowered in her memory.

Dr. Luckenbill first connected with the MBL as a student in the 1960 Invertebrate Zoology course. Later, after a series of post-doctoral research positions, and while serving as a faculty member at Smith College and Ohio University, she spent summers as a lab and library researcher. In her retirement she explored her interest and talent in art. The American Association for the Advancement of Science published this Q&A with Dr. Luckenbill in 2012.

Plans for an online memorial service are underway and will be led by West Falmouth Quaker Meeting. Those who wish to attend may contact Christine Chastain: chastain.christine@gmail.com.

An obituary provided by her family is below.

Louise Luckenbill left us for a new journey November 17, 2020, in Oberlin, Ohio.

Louise Luckenbill was born on November 19, 1936 in Lebanon, Pennsylvania, United States. She was the daughter of Fred E. and Anna G. (Mengel) Luckenbill.

Louise received a Bachelor’s degree from Oberlin College in 1958 and she completed postgraduate work at Washington University, St. Louise in 1961. Louise received her Doctor of Philosophy from Brown University in 1964.

Louise was a research instructor at Brown University Medical School, a Science fellow at Hubrecht Laboratory, Utrecht, The Netherlands and an assistant professor at Smith College. She then went on to instruct at Harvard Medical School and was an associate professor of biology at Ohio University.

In addition, she spent time as a science fellow at the Max Planck Institute for Biochemistry in Martinsried, Germany. She remained an associate professor emerita at Ohio University and was a guest scientist at the National Institutes of Health.

Louise’s love for the Marine Biological Laboratory ran deep. She delighted in her time within the community.

In retirement, she became a talented artist who exhibited publicly on multiple occasions. Her particular interest was the marriage of science and art, which she actively pursued up until a few weeks before she passed.

Louise’s insatiable curiosity, keen mind and generous mentorship have touched and benefited many. She was a wonderfully complex and thoughtful human who loved her faith, her family and friends, travel, laughter, gardening and romance.

Louise is survived by an extended family and many, many friends who will miss her terribly but are consoled by the many beautiful memories shared. Plans for an online memorial service are underway and will be led by West Falmouth Quaker Meeting. Those who wish to attend may contact Christine Chastain:
chastain.christine@gmail.com.