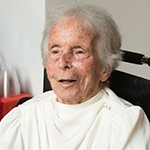 It is with great sadness that the MBL shares the passing of longtime MBL supporter and former MBL Associates president Margaret J. Clowes, who passed away on January 24, 2017 at the age of 102. As president of the Associates in the late 1970s, Mrs. Clowes led the effort to fund and create the MBL Quadrangle on the site of the former Old Main.

An obituary written by her family is below.

Margaret (Gracie) Jackson Clowes, known to all as Peggy, died at her home in Dover, Massachusetts, on Tuesday, Jan. 24, at the age of 102.

Peggy was born in Dover on Oct. 14, 1914, the daughter of Charles and Elizabeth (Higginson) Jackson. She attended Charles River School in Dover and graduated from the Winsor School in Boston. She was a committed athlete her whole life, playing tennis into her late 80s and continuing to swim and sail well into her 90s. Until she left home to attend Bryn Mawr College, she lived in Dover, Boston and on Martha’s Vineyard during summers.

In 1942 Peggy married Dr. George H. A. Clowes, Jr. from Indianapolis (1915-1988). The couple lived in a variety of places, including Boston, where George was doing his internship, an army base in Texas during his World War II service, Toronto, Cleveland, and Charleston, South Carolina. In 1965 the family returned to the Boston area, settling in Dover, where Peggy and George lived for the rest of their lives.

After her marriage Peggy spent almost every summer of her life in Woods Hole, where she served at various times as a board member and president of both the Children’s School Science and the Associates of the Marine Biological Laboratory. She also served several terms as a trustee of the Sea Education Association. As president of the MBL Associates in the late 1970s, she led the effort to fund and create the MBL Quadrangle on the site of the former Old Main.

Peggy was a lifelong supporter of women’s rights, social justice, and access to education. She was a volunteer teacher for much of her life, first in the Cleveland schools, where she taught both French and German, and then as a classroom aide and teacher of English as Second Language for about 35 years. In June 1998 Peggy was recognized for her support of science education as well as her seamanship with an honorary doctorate from the Massachusetts Maritime Academy. She also served as a director and officer of The Clowes Fund for more than half a century.

Donations in Peggy’s memory may be made to the building funds at either St. Dunstan’s Episcopal Church, Springdale Avenue, Dover, MA, 02030, or The Church of the Messiah, Church Street, Woods Hole, MA, 02543.