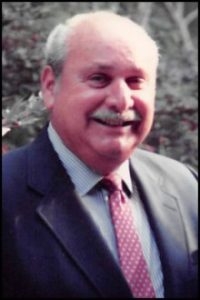 It is with sadness that we share the passing of MBL Society Emeritus Member Merle Mizell who died on June 5, 2020 at the age of 93. The MBL flag will be lowered in his memory.

Dr. Mizell had a long career at Tulane University where he was a Professor in the Department of Biology, the Director of the Laboratory of Tumor Cell Biology, and a faculty member at Tulane University School of Medicine. Dr. Mizell was a member of the MBL community for more than fifty years. He was an alumnus of the MBL X-Invertebrate Zoology course (1953) and the Microinjection Techniques course (1993). He later taught in MBL courses, including the Aquatic Veterinary Medicine program, and conducted summer research. Dr. Mizell was a Library Reader from 1970 until his death. He endowed The Michael Mizell Public History Lecture at the MBL to honor his son, the late Michael Mizell-Nelson.

Dr. Mizell was interred with his wife of 51 years, Lorraine, at the Massachusetts National Cemetery with full military honors. In lieu of flowers, donations may be made to The Michael Mizell-Nelson Digital History Laboratory (at the University of New Orleans). Make donations online at www.unoalumni.com/give (under “Designation,” select “Other” and write in “The Michael Mizell-Nelson Digital History Laboratory”) or mail check to:

Merle was married to Lorraine Mizell (Busse) for more than 51 years until her passing in 2010. They met on a blind date in 1954 at the University of Illinois at Urbana-Champaign, where Merle was attending graduate school for his Ph.D. in biology. In 1958, Merle joined the faculty of the Biology Department at Tulane University in New Orleans for his entire career. Since 1968, Merle and his family divided their time between New Orleans and Sippewissett, where he spent summers doing research at the Marine Biological Laboratory. After Hurricane Katrina devastated New Orleans in 2005, Merle and Lorraine lived year round in Sippewissett.

In his scientific career, Merle made contributions in tumor cell biology, viral oncology, embryology, and limb regeneration. One aspect of his teaching that he enjoyed immensely was mentoring young scientists and following the development of their careers. Merle greatly valued his close bond with his former student, Dr. Steven M. Paul. According to Dr. Paul: “Merle carried out pioneering research over his long and very distinguished career. He was among the first to demonstrate that certain viruses can cause cancer and that viral DNA can reside in a dormant or latent form in the tumor cell until activated by environmental cues. His work on limb regeneration in both amphibia and mammals was also groundbreaking and has helped explain the developmental programs responsible for successful limb regeneration in certain species but not others. Merle was first and foremost a great teacher and mentor to dozens of students at Tulane who themselves went on to have very successful careers in science and medicine.”

At Tulane University, Merle was a full Professor in the Department of Biology, the Director of the Laboratory of Tumor Cell Biology, and a faculty member at Tulane University School of Medicine. Merle first began coming to MBL as a graduate student in the 1950s. A member of the MBL for over fifty years, he served on many committees and taught a variety of summer classes, including several in the Aquatic Veterinary Medicine program. Merle was an MBL Society Emeritus Member.

During World War II, Merle enlisted in the US Navy on his 18th birthday. He was interred with Lorraine at the Massachusetts National Cemetery with full military honors. With him are numerous family photos and mementos, his MBL Library card, and his lobster fishing license.

His love of family was paramount – the highlights of his life were his late wife Lorraine, children (Tracy Mizell Moore and her husband, Dr. Sean Moore, of Hollis, New Hampshire, and the late Dr. Michael Mizell-Nelson and his wife, Catherine Mizell-Nelson, of New Orleans) and grandchildren (Isabelle Lorraine Moore, Constance Louise Moore, Keely Maia Mizell, and Arlo Jack Mizell). His parents were the late Harry and Eleanor (Ellman) Mizell of Chicago. He was predeceased by two brothers, Dr. Irving Mizell and Dr. Sherwin Mizell.

Merle and Lorraine had both professional and personal collaborations. With Lorraine, he designed their “upside down” home, “Sea Aerie.” Lorraine was in charge of sectioning tumors for electron microscopy studies in Merle’s laboratory, while Merle built the frames for all of Lorraine’s stained glass artwork, which decorated their homes in New Orleans and Sippewissett. For their home in Sippewissett, Merle designed an art room to showcase Lorraine’s paintings and stained glass.

Merle connected his New Orleans and Cape Cod locales in many ways: he would provide Mardi Gras king cakes to many Cape Codders; when his children donated a seat in his honor at MBL Lillie Auditorium, he selected the seat location “I-10” as a nod to the interstate highway that passes through New Orleans; and he practiced the New Orleans’ tradition of “lagniappe” with his many Cape Cod friends by always giving “a little something extra” to others.

Merle led a full life with many interests. He assisted his wife Lorraine with her stained glass artwork. He was a licensed lobster fisherman, maintaining several traps in Buzzards Bay for many years. He fished for “stripers in the Hole”. A gifted gardener, he propagated varieties of different hydrangeas and established an orchard at Sea Aerie. He was an avid fan of the New Orleans Saints, the Boston Red Sox, the New England Patriots, the Boston Celtics, and the Tulane Green Wave. He loved the local restaurants and foods of Cape Cod and New Orleans. He maintained saltwater aquariums at his home and encouraged his grandchildren to collect and study marine animals (there was a collecting tank as well a “lab book” in which the grandchildren were to make their daily observations). Some of his research work involved opossums, and several baby opossums made their way to his home as pets for his children. He also enjoyed the arts by maintaining decades-long patronage of Le Petit Theatre in New Orleans and the College Light Opera Company in Falmouth.

Merle Mizell was a wonderful husband, father, grandfather, scientist, and educator who lived independently with his dog, Mackie, at Sea Aerie until his passing at 93 from ‘double hit’ non- Hodgkin lymphoma, which was the fifth cancer that he valiantly fought against. He is now reunited with his beloved wife Lorraine and son Michael, who was born on Father’s Day in 1965. They are enjoying po-boys together once again (Michael co-founded the New Orleans’ Po-Boy Festival and documented the origin of the “po-boy” name).