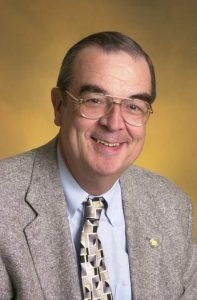 Michael Edward McClure, Ph.D., passed peacefully Friday, May 11, 2018 in Greenville, NC. He was born August 15, 1941 in Goshen, Indiana, to Thelma and Frank McClure. He is survived by his beloved wife, Elaine McClure and daughter Kelly McClure of Washington, North Carolina. He is also survived by his brother, Thomas McClure of Denver, Colorado; nephew and wife, Tim and Amanda McClure and their two children, Connor and Brennen of Chesterfield, Missouri; and nephew and wife, Alan McClure and Vivian Ducret, of Columbia, Missouri; and numerous loving in-laws.

Dr. McClure received a Bachelor of Science degree from Purdue University, West Lafayette, Indiana, as well as a Master of Science and Ph.D. from the University of Texas, Houston. He was a member of the New York Academy of Sciences and a number of other medical and scientific organizations. During his illustrious career, Dr. McClure worked as Branch Chief at the National Institute of Child Health and Development (NICHD), National Institute of Health, Bethesda, Maryland. He will be fondly remembered for his enjoyment in life, quick wit, and dry sense of humor.

Among Mike’s major professional achievements was the creation of the Frontiers in Reproduction (FIR) Course at the Marine Biological Laboratory (MBL) in Woods Hole, Mass. The idea for the course sprang from an international workshop on reproductive sciences held in Mexico City in 1995. Among the workshop findings was the need for advanced wet-bench training for the international community of early-stage investigators in reproductive biology. As Chief of the Reproductive Sciences Branch of the National Institute of Child Health and Human Development (NICHD), Mike jumped on this unmet need and marshaled a cohort of experts to fashion a blueprint for the training program. As to venue, there was a consensus that the course should be held at the MBL, given MBL’s rich tradition of training courses, including the Fertilization and Gamete Physiology (FERGAP) course, directed by Charlie Metz in the 1960s and 1970s. Mike’s love of sailing also made Woods Hole attractive. He received encouragement from other colleagues including Sheldon Segal and Luigi Mastroianni, both of whom were Woods Hole summer residents involved at MBL, reproductive biologists, and sailors.

Creating a course de novo was no small undertaking for people with day jobs, but Mike kept the FIR planning process on track. It culminated in 1997 with a marathon organizational meeting of the inaugural course directors and faculty at the landmark Treaty of Paris restaurant in Annapolis, Maryland. At that time, neither Mike nor none of the founding course directors and faculty could have anticipated FIR’s amazing success and longevity, as well as its global reach, none of which would have come to fruition without Mike’s dedication and commitment. He orchestrated the funding that launched and sustained FIR. Support came from NICHD, and the Burroughs Wellcome Fund (BWF), with great enthusiasm from the BWF leadership and from John Burris, then MBL Director and later President of BWF.

Mike’s commitment to FIR never wavered, and he remained an active member of its Council of Scientific Advisors until a few months before his passing. His stewardship insured the exceptional FIR outcomes and course evaluations, reported in two publications in Biology of Reproduction. FIR trainees, known as “FIRbees,” were Mike’s pride and joy and he kept in close contact with them via social media. They are his living legacy. The FIR 20th Anniversary celebration in Woods Hole, June 2017, provided an opportunity for FIRbees old and new to recognize Mike’s singular contributions to the reproductive sciences.