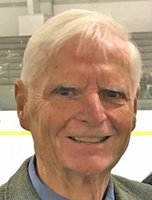 It is with sadness that we share the passing of former MBL Trustee and Society member Richard E. (Dick) Kendall who died on January 7, 2021 at the age of 86. The MBL flag will be lowered in his memory.

Mr. Kendall had a long career in public service to the Commonwealth of Massachusetts, serving  as a State Representative in the Massachusetts House of Representatives, Commissioner of Environmental Management, and the Governor’s Legislative Director.  Upon his retirement from state government, Mr. Kendall served the Town of Falmouth in various capacities.

Mr. Kendall was a MBL Trustee from 1986 to 1993 and was also a MBL Society member during the same period. In addition he served on the MBL’s Centennial Committee in 1988 and was a past president of the MBL Associates (now known as Friends of the MBL).

An obituary provided by his family may be found here.