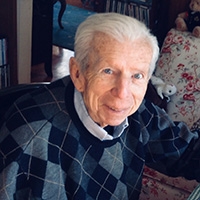 It is with sadness that we share the passing of Trustee Emeritus and MBL Society Emeritus Member Robert A. Prendergast, who died May 4, 2020 at the age of 88. The MBL flag will be lowered in his memory.

Dr. Prendergast served on the MBL Board of Trustees from 2001 to 2008 and from 2010 to 2013. He was a member of the Discovery Campaign Steering Committee from 1997 to 2000. Dr. Prendergast was a faculty member in the MBL Physiology and Comparative Pathology of Marine Invertebrates courses in the 1970s and 1980s. In recent years, he continued to spend time in the MBLWHOI Library.

Dr. Prendergast leaves behind two nieces, Laura and Cathy. Memorial contributions may be made to feedingamerica.org. Services will be scheduled at the conclusion of the COVID-19 pandemic. For online guestbook, please click here.

An obituary provided by his family is below. See also obituary notice in the Falmouth Enterprise.

A veteran who was born in Brooklyn, NY, Bob was Captain in the U. S. Army Medical Corps, stationed during his service at Walter Reed Army Medical Center. He subsequently joined the Department of Ophthalmology and Pathology at The Johns Hopkins University as a research and teaching professor.

Bob came to the Marine Biological Laboratory in 1968 as a summer investigator with an interest in the sea star. He taught in the Physiology, and the Comparative Pathology of Marine Invertebrates courses in the 1970’s-‘80s, was later an Adjunct Senior Scientist in the Bay Paul Center, and a Trustee Emeritus of the MBL. Falmouth residents may remember Bob biking to the MBL well into his 70s, and hitchhiking thereafter.

While he received his BA from Columbia University and his MD from Boston University, Bob continues to have an enduring influence on New York City, for as captain of the Columbia Crew team in the early 1950’s, he orchestrated the creation of what has become a city landmark, the 60’ x 60’ blue “C” painted on the Inwood cliffs above the Spuyten Duyvil Creek near the Columbia University Wien Stadium and Hudson River. Generations of Columbia Crew team mates perpetually maintain the landmark.

Bob leaves behind two loving nieces, Laura and Cathy. Memorial contributions may be made to feedingamerica.org. Services to be scheduled at the conclusion of the pandemic.