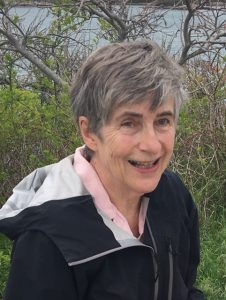 With sadness, we share the passing of Signhild “Signy” (Meincke) Tamm, age 74, who died on August 23, 2019. Mrs. Tamm served on the faculty/staff of the Boston University Marine Program at the MBL from 1979-1986, and was an independent researcher at MBL from the University of Wisconsin in 1978.

Below is from an obituary provided by her husband, Sidney Tamm, also a longtime affiliate of the MBL.

Born and raised in Eckernfoerde, Germany, Signy Tamm was the daughter of the late Dr. Gustav W. K. Meincke and Marianne (Magnusson) Meincke. Signy’s childhood in Germany included travels to Sweden, where she had family, and taking part in one of the first postwar student exchanges between Germany and France. Signy was passionate about science and the natural world. She studied biology at the University of Tuebingen in Germany in the 1960s, and, while working at the University of St. Andrews in Scotland, she met Dr. Sidney L. Tamm, a cell biologist, and they married in 1969.

The Tamm family moved to Cape Cod in 1979. Signy pursued a career as an electron microscopist at the Boston University Marine Program at the Marine Biological Laboratory in Woods Hole, making remarkable discoveries in cell motility and the biology of comb jellies. She switched career paths in her 50s to pursue her longstanding interest in psychology. She received a master’s degree in counseling psychology from Lesley University, becoming a counseling psychologist at SMOC Behavioral Healthcare in Framingham, MA.

In addition to a home in Falmouth, MA, she and Dr. Tamm also had a home in Newton, MA, for 17 years, and she filled her homes with plants, especially orchids, and she always had a beloved cat or two to snuggle with. She enjoyed the best of both worlds, exploring the conservation lands around Falmouth and Newton and also travels further afield, including exploration and hiking in the Berkshires, Maine’s Bold Coast, the coast of Australia, and the Gaspe Peninsula in Canada.

Signy is survived by Sidney, her husband of fifty years; her two children Peter (Carrie) Tamm and Ingrid (Max) Grudin; her grandchildren Jonas, Matteus, and Elizabeth; and her two brothers Hans-Magnus and Gustav Meincke, and their families. Her friends and family deeply miss her warmth and generosity; her enthusiasm for knitting socks for everyone; her keen botanical knowledge and unerring sense of where to find the best wild berries; her enthusiasm for good German chocolate and delicacies; her love of books; and her wise and enduring counsel.

Signy’s family wishes to thank VNA Hospice of Cape Cod for their care and compassion and her many friends who supported her through her last journey. A stone bench honoring her can be found on Falmouth’s Salt Pond, where her friends and family will find solace in the natural beauty there that she so loved. A private celebration of Signy’s life is being planned. Donations in her honor can be made to the Joslin Diabetes Center and to the Salt Pond Area Bird Sanctuaries, causes close to her heart.