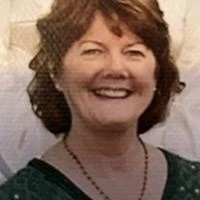 With sadness we share the passing of former longtime MBL employee Susan Joslin who died on November 7, 2022 after a long struggle with breast cancer. Susan worked with the MBL Communications and Development departments for 19 years. She was hired in 1998 as Assistant Director of Communications and managed fundraising and public outreach events. In 2001 she became Associates Administrator and worked closely with volunteers, in addition to managing the MBL Gift Shop. She retired from the MBL in 2017. The MBL flag will be lowered in her memory. The obituary below was published in the Falmouth Enterprise.

Susan was born and raised in Connecticut. She graduated from Bard College with a degree in dance and followed that with an MA in Dance Education at NYU. While living in New York City, she met and married John Scott Wilkerson during a reverse commute to her teaching job on Long Island.

They had two children, Joslin and Charles. Following an eight year stay in Central Point, Oregon, they moved to Cape Cod in 1989. There Susan worked for The Waldorf School of Cape Cod as administrator and admissions director. In 1991, John Scott died of malignant melanoma.

Susan went to work at the MBL in 1998, where she ran special events and oversaw the volunteer activities. It was there she met her future husband Joe Hayes. Susan attended a brief residency program at Spaulding University, graduating with an MA in creative writing.

In 2009 the family lost Charles Wilkerson to an accidental overdose. The family then created The Charlie Wilkerson Endowed Memorial Fund at Gosnold to support and educate families.

Susan was an active member of the early music group, The Solstice Singers for over 20 years, as well as a student of Julia Childs Nature drawing class in Woods Hole.

Susan’s voice was magic. Her lullabies are carried by children and grandchildren- ingrained in hearts and minds. Happy Birthday was never sung without her lovely soprano voice beginning it’s tune.

Susan had the answer to every question, the words to soothe any pain, and the intellect to solve any problem. Her writing was as melodious as her singing, and her art as beautiful as her touch. She was so gifted at so many things, and leaves pieces of herself in this world that will long be cherished by all who knew and loved her.

Susan was predeceased by her parents, Sally and Ramsey Joslin, as well as her late husband John Scott, son Charles, step daughter Aidan Hayes and brother-in-law Ronald Kendall. She leaves behind her sisters Sarah and husband David, Eliza Kendall and Caroline Joslin. She leaves behind step daughters Viridiana and Felicia and step sons Connor and Dugan Hayes and John McCluskey. She leaves her daughter Joslin Joel, her husband Josh and four grandchildren, Charlotte, Winston, Susanna and Matilda as well as many cousins, nieces and nephews. Donations to Charlie’s Fund at Gosnold would be greatly appreciated.