Oysters and Seaweed: Better Together? 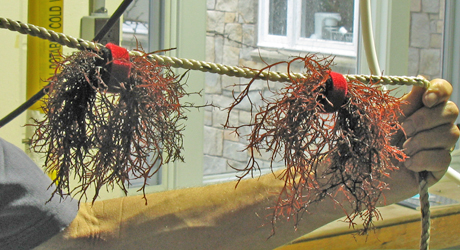 WOODS HOLE, MA—For seafood lovers, perhaps nothing is more mouthwatering than freshly shucked oysters served on a bed of crushed ice and seaweed. A new MBL (Marine Biological Laboratory) initiative will pair the two delicacies in an aquaculture project aimed to combine a new business opportunity for fisherman with a solution for cleaning up coastal waters.

Starting next month in Massachusetts’ Waquoit Bay, Scott Lindell, Director of the MBL’s Scientific Aquaculture Program, and his colleagues will grow the native red seaweed Gracilaria tikvahiae with Atlantic oysters. They’ll compare the growth performance and nitrogen removal potential of farming the two together versus farming oysters alone. The scientists hypothesize that multi-cropping shellfish and seaweed (scientifically referred to as macroalgae or sea vegetables by chefs) can be a more profitable business model and help clean coastal estuaries better than growing a single species.

Lindell thought of the idea two years ago while attending a conference focused on shellfish and seaweed aquaculture as a method for cleaning up degraded coastal waters. The approach, known as nutrient bioextraction, is the practice of farming and harvesting shellfish and seaweed for the purpose of removing nitrogen and other nutrients from natural water bodies.

At the conference, Lindell met Dr. Charles Yarish, a University of Connecticut professor whose research assesses the bioremediation role of seaweeds in Long Island Sound and other urbanized estuaries. “Long Island Sound has an acute problem with algal blooms that can suffocate fish and shellfish,” explains Lindell. “Charlie’s been actively looking at seaweed as part of their solution. Others at the conference were saying farming shellfish was better because they have more economic value. I wanted to study bioextraction in total—what makes more sense, shellfish or seaweed? I came to the conclusion that they are not mutually exclusive and that growing seaweed is quite compatible with growing oysters.”

Last year, Lindell collected red seaweed from a dozen sites in Waquoit Bay and sent the samples to Yarish’s lab for DNA analysis for identification. From that material, Yarish started culturing two particularly fast growing and robust native varieties of the target seaweed species. Last week Yarish delivered 20, 3 1/2 gallon jars of seaweed to Lindell, who will continue cultivation in the MBL’s Marine Resources Center until the seaweed is transplanted to study sites on an oyster farm in Waquoit Bay next month.

Lindell will grow the seaweed on ropes suspended around oyster cages maintained by Washburn Island Oyster Farm. Other oyster cages will be grown without seaweed. Monthly measures of seaweed growth, oyster growth, and survival will continue through October. Lindell and his team will also sample oyster and seaweed tissue to measure the nitrogen content and estimate the nitrogen removed.

While oyster aquaculture alone can be beneficial to local waters, there is evidence that co-culture with seaweed could greatly enhance nitrogen removal. “Harvesting aquacultured oysters removes twice the nitrogen that harvesting wild seaweed in the same area would yield,” explains Lindell. “However, we estimate that cultured Gracilaria can remove many times more nitrogen per year than cultured oysters in the same unit area depending on culture methods.”

Eastern oysters are a well-known delicacy and very popular commercially. While Gracilaria has historically been a commercial source of food grade agar, used in many food products for its gelling and thickening properties, Lindell says it may also be suitable for biofuels or as a fish feed supplement. “In this project, we are starting with nice clean cultures, so they should grow luxuriantly,” says Lindell. “The highest use and best end product would be as the key ingredient for a seaweed salad.”

Lindell and Yarish hope the potential applications for food, biofuel, and ecosystems services modeled by this project will inform business, policy, and community leaders of future options for managing natural resources. “The Town of Falmouth is currently weighing its options for sewering, and is considering alternatives such as aquaculture and bio-extractive technologies,” says Lindell. “The results of this project could help many towns on Cape Cod and elsewhere evaluate this potential method for improving water quality in our coastal ponds.”

Lindell and his colleagues plan to conduct local workshops and publish outreach publications that will inform coastal policy decision-makers and the public about the potential for bio-extractive technologies and business opportunities.

The two-year project, co-directed by Lindell and Yarish, is funded by The Woods Hole Sea Grant Program.