Walk This Way: Scientists and MBL Physiology Course Students Describe How a Motor Protein “Steps Out” 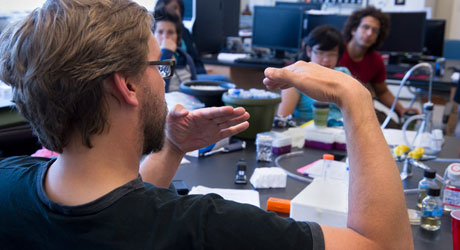 WOODS HOLE, MA—Just like people, some proteins have characteristic ways of “walking,” which (also like human gaits) are not so easy to describe. But now scientists have discovered the unique “drunken sailor” gait of dynein, a protein that is critical for the function of every cell in the body and whose malfunction has been associated with neurodegenerative disorders such as Lou Gehrig’s disease and Parkinson’s disease. The research, which was led by Samara Reck-Peterson of Harvard Medical School and partially conducted in the MBL Physiology Course, received advance online publication this week in the journal Nature Structural & Molecular Biology.

Found in all of our cells, dynein is one of three types of “motor proteins”: tiny molecular machines that are constantly working to shuttle materials needed to keep cells alive, allow cells to move and divide, and talk to their neighbors. All three types of motor protein (dynein, myosin, and kinesin) are “two-footed” and use the energy from breaking chemical bonds to generate movement.

“The myosin and kinesin motors work by walking more or less like we do: one foot in front of the other in a straight line,” says Reck-Peterson. “We have discovered that the third motor model, dynein, appears to be different. Its two feet are at times uncoordinated and often veer from side to side (think drunken sailor). This mode of walking makes the dynein motor unique and may allow it to navigate obstacles while performing its transport functions in cells. Interestingly, our data also suggest that the dynein motor becomes more coordinated when it is hauling something large, implying that the motor can become more efficient when necessary.”

Although this discovery is but a “first step,” deciphering the walking mechanism of dynein may one day shed light on the molecular basis of neurodegenerative disease, Reck-Peterson says.

Co-authors Elizabeth Villa of the Max Planck Institute of Biochemistry and David Wu of UCLA’s Geffen School of Medicine were students in the 2007 MBL Physiology Course. There, they began writing custom software code to analyze molecular movement by “two-dimensional particle tracking,” which was used in this research.