If you live or work in Woods Hole, you’ve seen the portents. Atlantic Ocean waves surge over the seawall in Waterfront Park during heavy rainstorms, soaking the grass and splashing onto Water Street. The Marine Biological Laboratory’s docks on Eel Pond submerge. The corner of Gardiner Road and Millfield Street floods, and water streams down the roadways.

Flooding in Woods Hole Village is a present-day reality that is only projected to increase in frequency and severity over the next century, as detailed in a report released this week by the Woods Hole Group (WHG). The report presents probabilistic scenarios for sea-level rise, storm-surge inundation, and habitat change (such as salt marsh transforming to open water) by the years 2030, 2050, and 2070 in Woods Hole, as well as concepts for adaptation planning.

Waves from Great Harbor crash over the seawall in Waterfront Park, Woods Hole, February 2020.
The video was taken from MBL’s Candle House building on Water Street.

“Three world-class oceanographic institutions are located within a half-mile stretch of the aptly named Water Street in Woods Hole, and while each institution has its own self-interests, we realized that better outcomes could be achieved by working together,” said Rob Munier, WHOI’s vice president for marine facilities and operations, at a public symposium that preceded the report’s release (a videorecording is here).

Leaders from the institutions, including MBL’s Chief Operating Officer Paul Speer and Director of Facilities and Services Marie Russell, worked with the Woods Hole Group to develop asset-level, district-level, and community-level strategies that can form the basis for future discussion and planning, ultimately resulting in the long-term viability and resilience of Woods Hole’s institutions and the community itself.

The vision is for the institutions to partner with each other, “with other Woods Hole village entities, and with the Town of Falmouth to keep Woods Hole working.”

For its vulnerability assessments and adaptation concepts in Woods Hole, the WHG used the same approach that it has developed for the State of Massachusetts. Boston and Cambridge are in advanced stages of adaptation design using the WHG’s approach; other municipalities have adopted it as well, including the Town Falmouth.

This approach models the probability of flooding with very high resolution, down to 5- to 10-foot parcels; identifies key infrastructure at risk; and develops concepts and designs for resiliency and adaptation.

Woods Hole village sits at low elevation, said Kirk Bosma of the Woods Hole Group at the public symposium, and therefore has vulnerabilities. “The wonderful aspects of Woods Hole that connect it to the sea also become an issue,” he said. Relative sea level rose by ~ 10 inches in Woods Hole between 1932 and 2019, according to NOAA measurements, and this trend is expected to continue as the ocean expands due to warming and glacial ice melt.

That means even “sunny day predictions,” in the absence of storms, anticipate increased tidal flooding in Woods Hole. But the WHG approach also models the risk of flooding during storms, nor’easters and hurricanes, when you have “waves, wind blowing things in different directions,” Bosma said. “It’s a dynamic model that incorporates a lot of the processes that go into climate change and produces more information than, ‘are you wet or not’,” he said.

These forecasts allowed MBL, WHOI and NOAA to see which particular assets are at highest risk of “critical elevation flooding” (which prevents them from functioning) through the 2030, 2050, and 2070 planning horizons. They then worked with WHG to determine the consequences of flooding for each building or asset – how catastrophic it would be for the institution, both financially and to carry out its mission. Scores were then assigned to each asset (risk = probability of flooding x consequences of flooding), allowing the institutions to prioritize in their resiliency planning.

For MBL, the buildings at highest risk and consequence of coastal storm flooding are clustered around Eel Pond: Lillie Laboratory, the Marine Resources Center and its Collection Support Facility, Swope Conference Center, and Candle House.

“The area around Eel Pond is very high risk because those buildings count, and the likelihood of flooding is fairly high,” says Paul Speer.

The report proposes a concept for protecting these high-priority MBL assets that is incremental and modular, starting with present needs and adjusting over time.

Most immediately, says Speer, Lillie’s building systems (mechanical, electrical) need to be elevated from the basement, out of the flood zone. The same is true for Swope. Fortunately, these vulnerabilities were identified prior to the WHG’s report and some design planning has taken place. 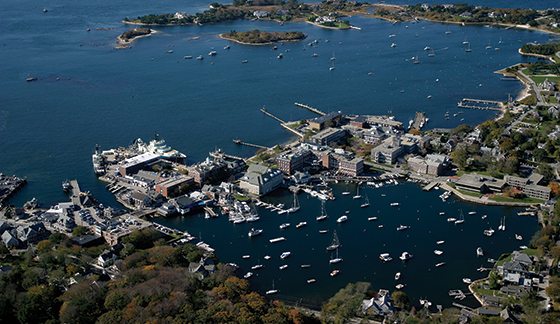 Other than isolated areas of high elevation, including MBL parcels near the intersection of North and Albatross Streets, “the rest of Woods Hole village, including all of NOAA’s property, the majority of MBL’s buildings, and WHOI’s waterfront facilities are vulnerable to storm surge under current conditions and will be increasingly exposed as sea level rises and storms intensify,” the report states. “Flood probabilities at campus locations along Albatross Street, Water Street and Eel Pond are currently in the range of 5-10 percent, but could increase to 10-20 percent by 2030, to 50-100 percent by 2050, and to 100 percent by 2070. These projections suggest that … much of Woods Hole Village could be inundated by the annual (100 percent chance event) storm by 2070.” 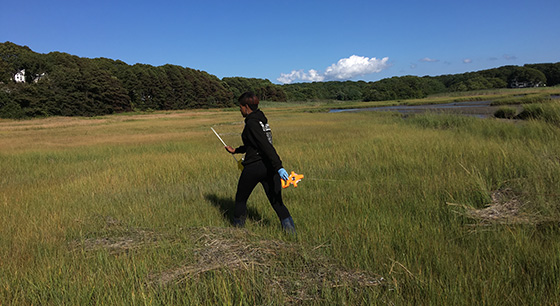 A University of Chicago student conducts field work in Little Sippewissett Marsh for a course at MBL. The WHG report predicts that large expanses of existing wetlands north of Eel Pond will transition to open water by the end of the century. Credit: David Mark Welch

The undeveloped areas of Woods Hole are also predicted to transform. As sea-level rises, salt marshes migrate inward if there are no barriers to their doing so. The WHG’s projections suggest that up to 50 acres of upland area in Woods Hole may be lost to wetland migration by the end of the century, and that large expanses of existing wetlands will transition to open water north of Eel Pond.

While the report is certainly sobering, it is no cause for despair, Bosma said at the symposium. These are projections, first of all; a variety of sea-level and storm conditions can occur. “And there are things you can start to do, to think about an opportunity to change your relationship with the waterfront [in Woods Hole] and still save the connection between the people and the water,” he said.

“Successfully managing the long-term impacts of sea level rise and storm-induced coastal flooding is key to the MBL’s future,” Speer said. “For a number of reasons, our location along the water’s edge in Woods Hole is key to what we do.”

Speer reaffirms the wisdom of finding community-level solutions to adverse climate change impacts. “Anything we do that is disconnected from the long-term view on whole-village and Falmouth solutions ultimately will not work,” he said. “We could spend a lot of time, effort and money hardening our buildings, but if we cannot access our campus by town roads, our actions will not help us that much. The results of this first round of cooperation on this report have been critical, not only to refine ideas we have in mind for the MBL campus, but for starting to think through how we collectively need to act going forward.”

Homepage photo: The MBL’s Supply Department during the 1938 Hurricane.