You're In or You're Out! Team Reveals How Cells Can Compose Liquid Droplets

WOODS HOLE, Mass. - A longstanding mystery in biology is how the millions of molecules bumping around in a cell “find” one another and organize into functional structures. So it was a big surprise in 2008 when participants in the Marine Biological Laboratory (MBL) Physiology course realized that simple phase separations – like oil separating from water – may be one important way to create order inside a cell.

While not without controversy, this idea has taken cell biology by storm. In the past decade, scientists have watched protein and RNA molecules condensing into droplets, or membrane-free condensates, in many kinds of cells, from bacterial to human. They have also noted that the same proteins that form liquid droplets in healthy cells can “solidfy” in the context of disease, such as neurodegenerative disorders. But what makes certain molecules come together in the same droplet, while others are excluded, has been unexplained.

This week in Science, a team shows for the first time that RNA molecules recognize one another to condense into the same droplet due to specific 3D shapes that the molecules assume. The study’s senior author, Amy S. Gladfelter of University of North Carolina, Chapel Hill, began this work as part of the HHMI / HCIA Summer Institute at the MBL, a group of 70 scientists who explored this emerging paradigm of cellular organization over five summers of intense, synergistic research. 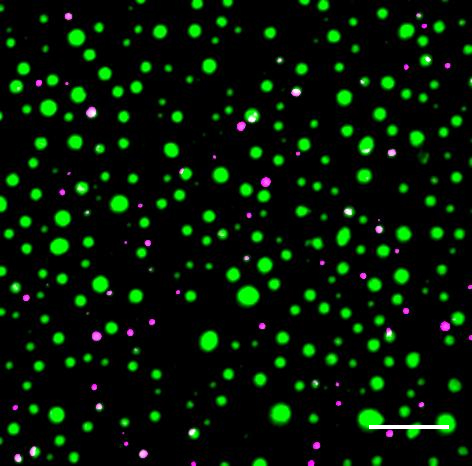 Working with fungus cells, Gladfelter (an MBL Fellow), Erin M. Langdon and colleagues show that RNA molecules end up in the same droplet if their 3D structures allow them to bind together through complementary base-pairing.

“RNA molecules will end up in different droplets if their secondary (3D) structures are shielding any complementarity. But with the RNAs that condense into the same droplet, their complementary sequences are really exposed, so they can find each other and base pair to make a higher-order interaction,” Gladfelter says. 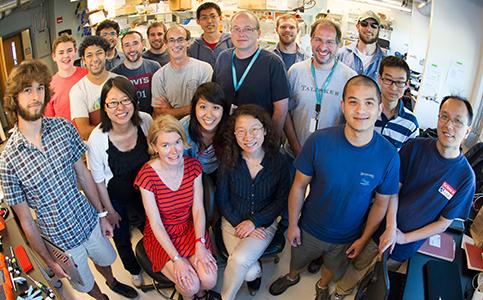 Members of the HHMI/HCIA Summer Institute at the MBL published more than 25 papers on the emerging field of liquid phase condensates in cells from 2012-2017. Amy Gladfelter is seated on left. At center are the institute’s co-directors (L-R): Ron Vale, Jim Wilhelm, and Michael Rosen. Last row, far right, is Clifford Brangwynne, whose group made the initial observation of cellular phase separations in the MBL Physiology course in 2008. Photo credit: Tom Kleindinst

This finding is important in that it reveals a selective mechanism for forming these RNA-protein condensates -- which scientists see everywhere in cells but whose function is still unclear. The condensates may serve as “crucibles” for enhancing biological reactions by concentrating specific molecules together. Or they may sequester molecules that the cell doesn’t need for a particular biological process.

Gladfelter has previously demonstrated in fungus that it’s critical that the cell undergo a liquid-liquid phase separation in order for two different biological process to occur. “But we need more examples of where it really matters for cell function,” Gladfelter says. The field needs evidence “that this is not just something that proteins and RNAs can do, but that nature has selected for it,” she says.

There are also indications that transition of these liquid condensates to a more solid state may be a factor in protein aggregation diseases, such as Alzheimer’s, Parkinson’s and Huntington’s diseases, ALS, and prion diseases. The current finding, Gladfelter says, “helps us understand how the right components get recruited to droplets so cells can potentially avoid this transition to an aberrant, solid state.”

“This is one of many examples in which perceptive MBL students and faculty made a significant contribution to biological research. And, importantly, the initial observation was intensively followed up through an innovative, multidisciplinary collaboration, the HHMI/HCIA Summer Institute at MBL. These are the kinds of synergies that generate extraordinary science at MBL,” said David Mark Welch, MBL’s Interim Director of Research.

Video:
See a series of short videos about the HHMI/HCIA Summer Institute at the MBL (2012-2017) here.