WOODS HOLE, Mass. — For generations, scientists have relied on a handful of organisms to study the fundamentals of biology. The usual suspects—fruit flies, zebrafish, and mice, among others—all have short lifespans, small body size, can be bred through multiple generations in the laboratory, and have been developed for genetic investigations. These research organisms leave out a whole swath of biological diversity and scientists have lacked access to a cultured octopus laboratory organism—until now. Introducing the pygmy zebra octopus (O. chierchiae).

In a new paper published in the journal Frontiers in Marine Science, researchers from the Marine Biological Laboratory (MBL) introduce scientists to successful culturing methods for O. chierchiae that were developed at the MBL. 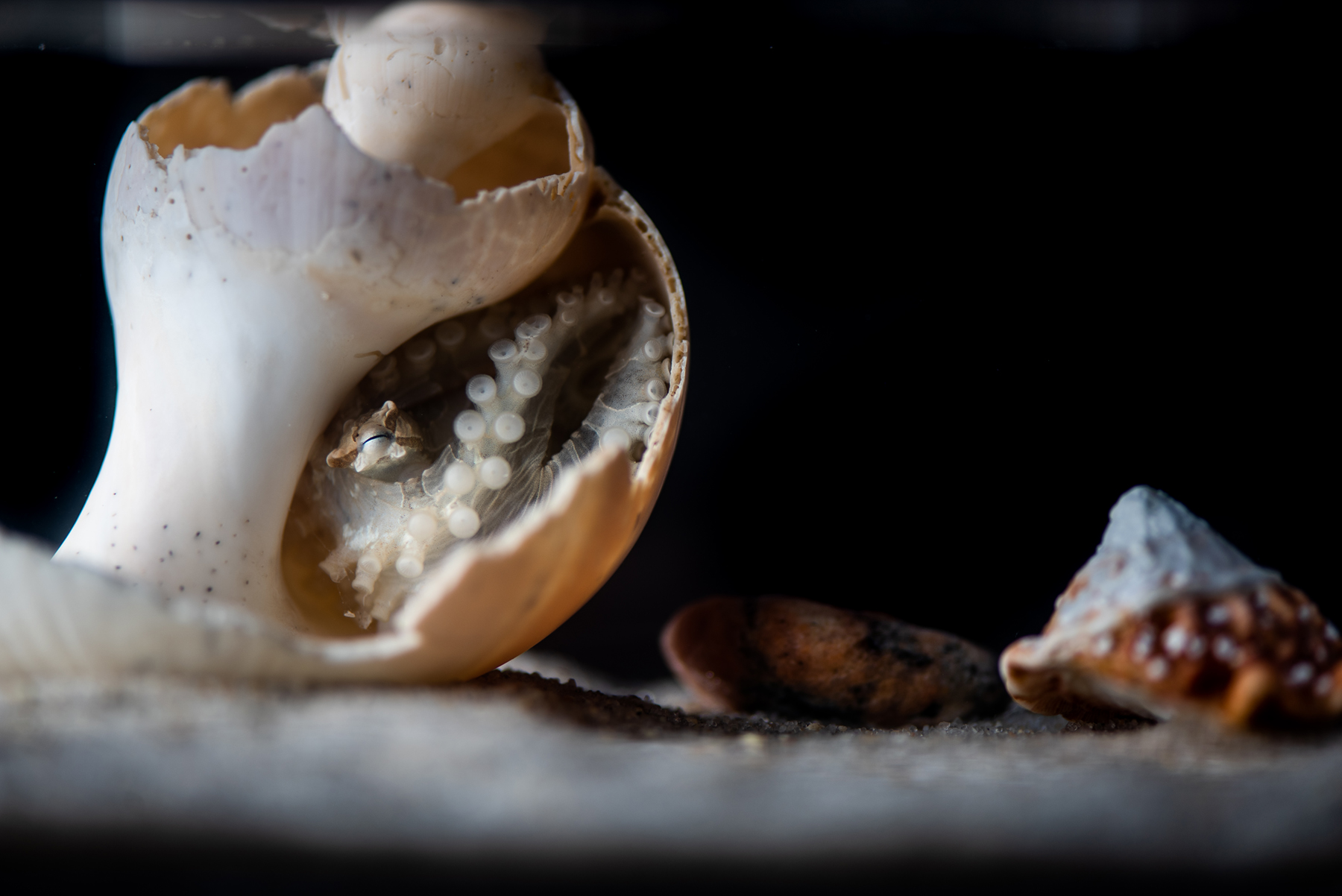 O. chierchiae adult in a shell looking at a snail. Credit: Tim Briggs

The pygmy zebra octopus has certain biological features that make them attractive and more appropriate for laboratory research, compared to other octopuses,” says Bret Grasse, MBL’s manager of Cephalopod Operations and co-author on the paper.

Also known as the “lesser Pacific striped octopus,” the pygmy zebra octopus shares many useful similarities with other research organisms—such as small adult body size—but it also has unique features that distinguish it from other cephalopods (the group of animals that include octopus, squid, and cuttlefish).

“The majority of octopuses are ‘live fast, die young.’ They breed once and then immediately start to senesce and age and then die relatively quickly,” says Anik Grearson, former MBL intern and co-lead author on the paper. Unlike other octopus species, a female O. chierchiae lays several clutches of 30-90 eggs over her reproductive period. 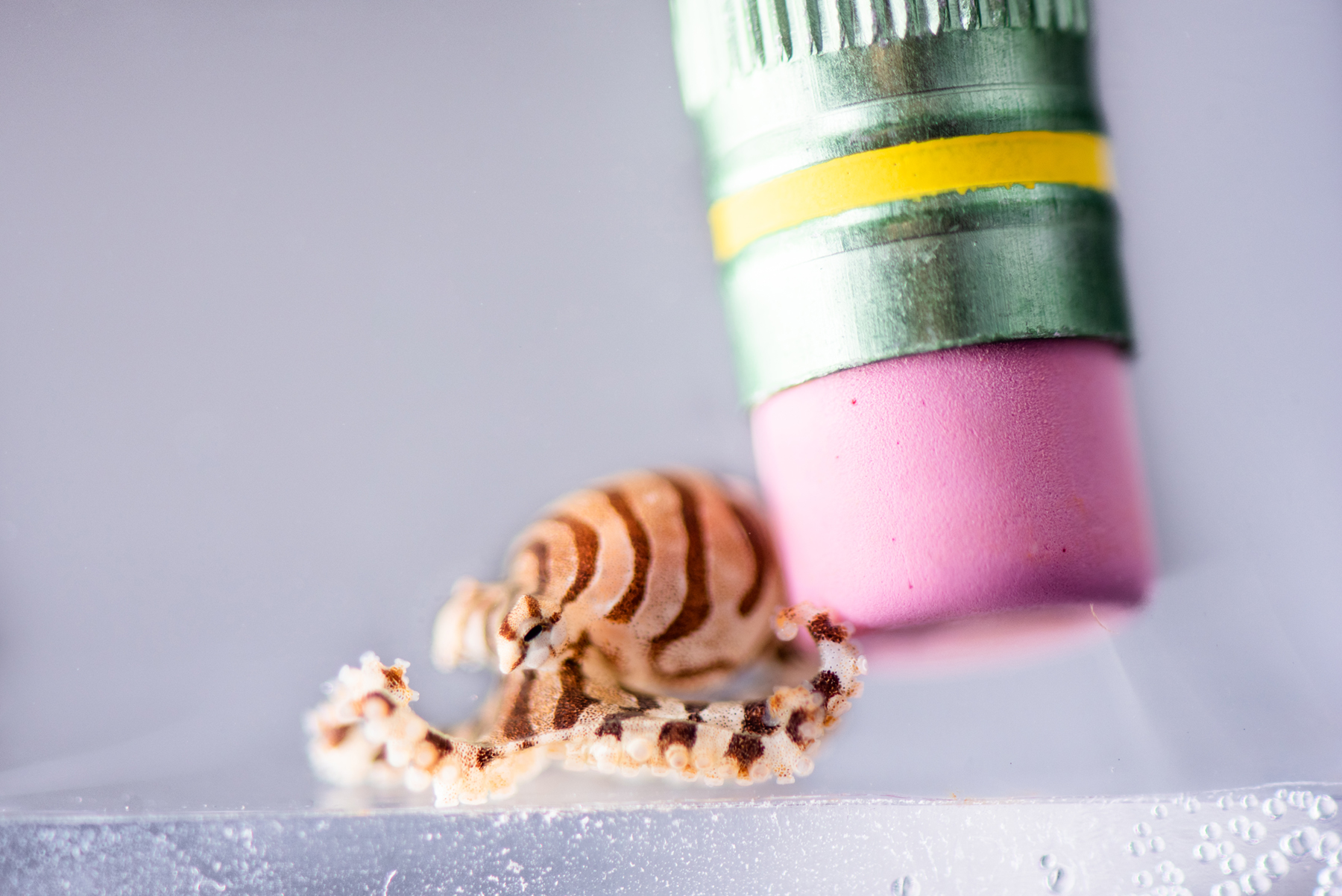 A pygmy zebra octopus hatchling in the MBL Cephalopod Mariculture Lab. These octopuses are about the size of a grain of rice when they hatch. They reach full size (about the size of a table grape) within six months. Credit: Tim Briggs.

“We can mate them and know exactly when they’ll lay their eggs. We know exactly how long they’ll incubate and we can raise offspring at a relatively high survivorship rate compared to other octopuses,” says Grasse. Add that to its small size, sexual dimorphism, and predictable breeding schedule and it’s easy to see why O. chierchiae is an ideal candidate for further exploration and research.

Being able to successfully breed octopuses in a laboratory opens up “novel science that hasn’t been possible before,” says Grasse. 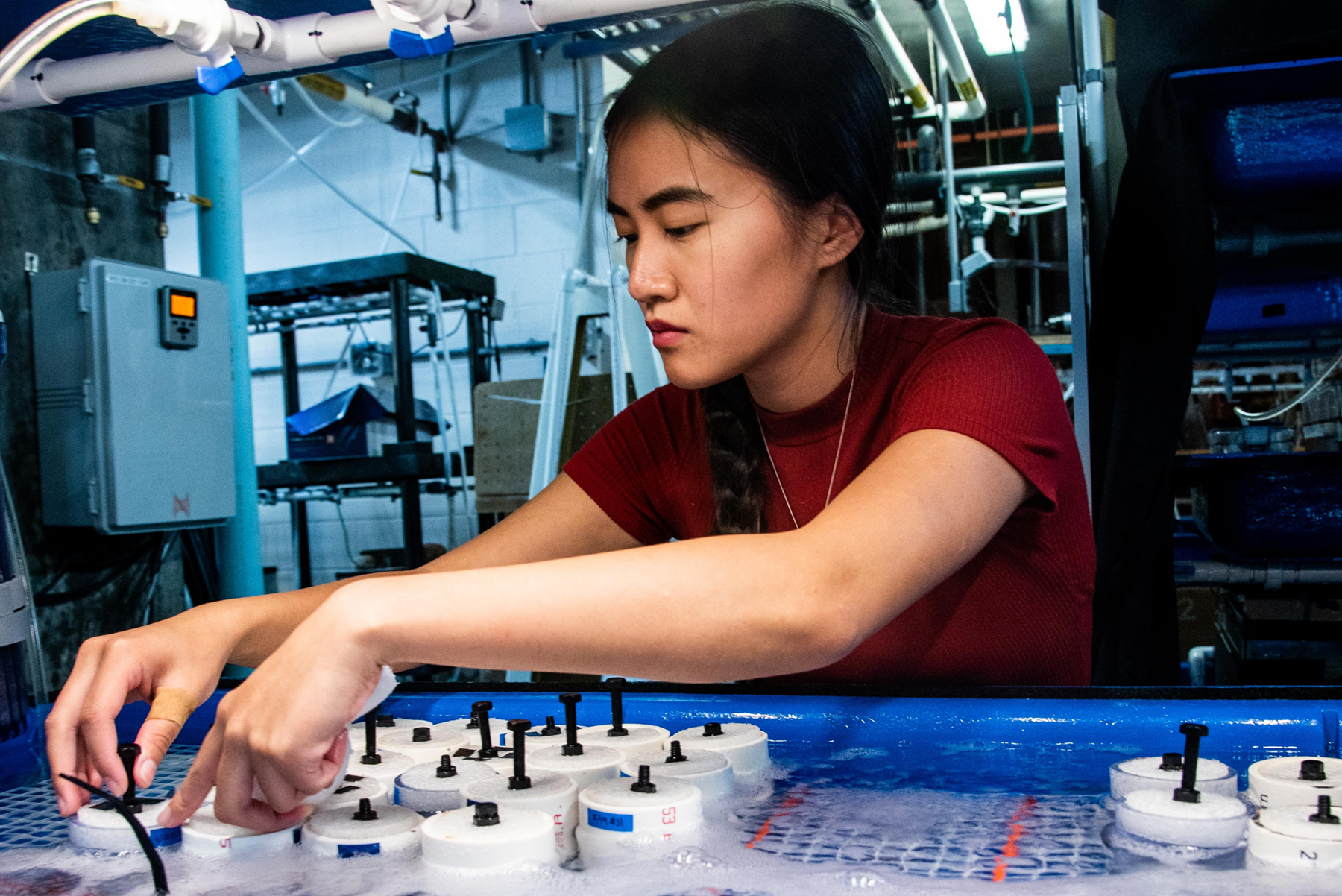 Anik Grearson, co-lead author on the paper, leans over a tank in the MBL Cephalopod Mariculture Lab. She was an intern at the MBL during 2019 while she was getting her bachelor’s degree from McMaster University. She is currently in a master’s degree program at Northeastern University.

Scientists at the MBL and around the world study cephalopods to learn about everything from camouflage and limb dexterity to regeneration and neurobiology. The majority of U.S. scientists studying octopuses use the California two-spot octopus (O. bimaculoides), which is local to the waters off of California. But those octopuses have yet to be successfully bred in the laboratory through multiple generations, so most scientists study wild-caught animals shipped to their labs from California.

Octopuses are also territorial, and each organism must be housed individually. An adult two-spot octopus is about the size of a softball, whereas an adult pygmy zebra octopus is only the size of a table grape, making the smaller-size species ideal for space-conscious laboratories.

“We now have this octopus species that’s really small and that can be bred regularly,” says Grearson. “The sky’s the limit for what people want to do.”