Hundreds of tiny, orange-speckled pygmy zebra octopuses, each no bigger than a grain of rice, have safely hatched out in the MBL’s Marine Resources Center. And Bret Grasse, Manager of Cephalopod Operations, couldn’t be more proud.

“It’s very exciting for us. Other scientists have successfully mated this species before, but nobody had achieved multigenerational culture until this,” Grasse said.

The MBL is interested in the pygmy zebra octopus as a contender for basic research on the cephalopods (octopus, squid, and cuttlefish). The cephalopods’ agile behavior, complex nervous system, skill at camouflage and regeneration, and other traits mark them as uniquely advanced, if very strange invertebrates indeed (see sidebar). 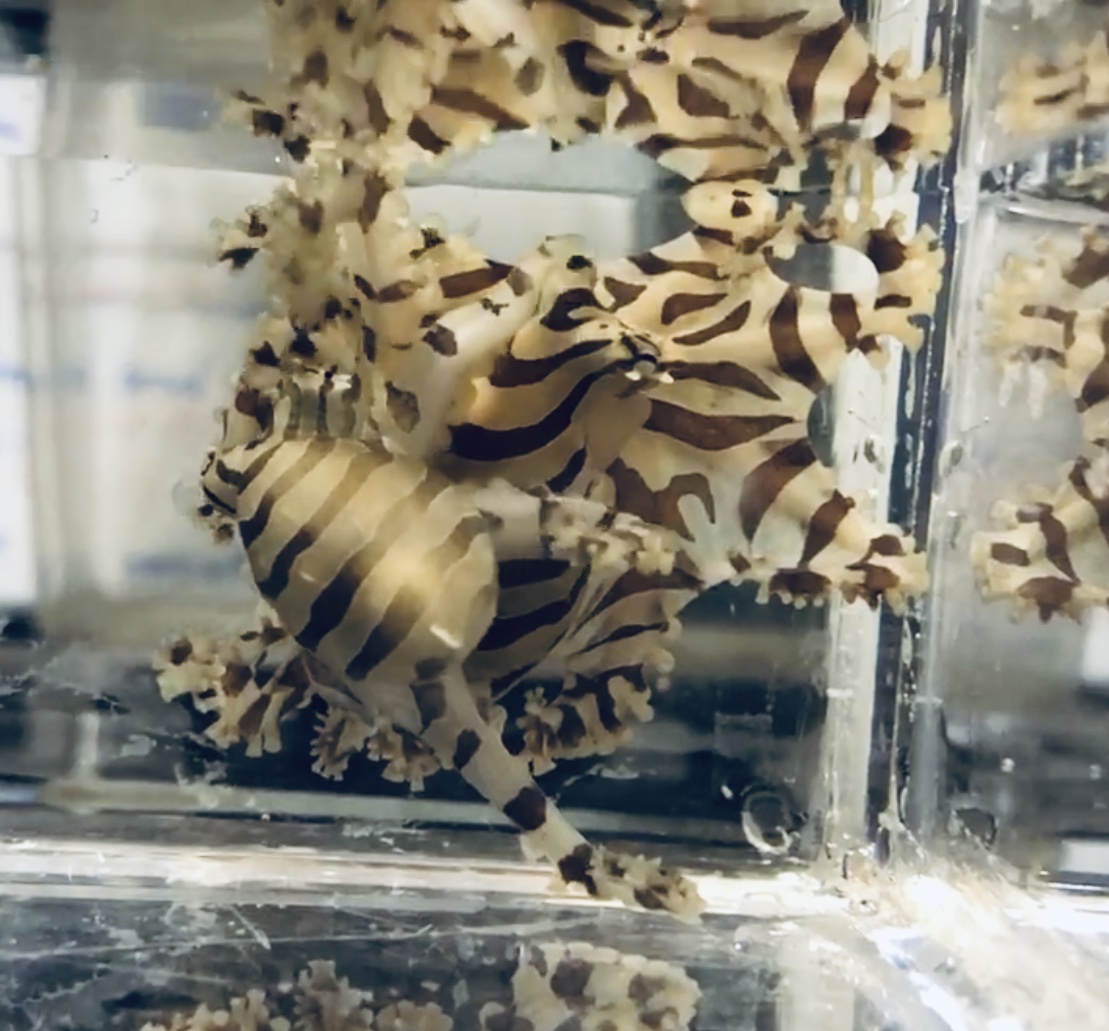 “Octopus breeding is not an easy feat. It takes a lot of attention to detail, and we are literally writing the book as we go,” Grasse said.” It’s really a testament to our team that second-generation pygmy zebra octopuses have been born in the lab for the first time.”

Mating: First Do No Harm

The first challenge for Grasse was importing male and female pygmy zebra octopuses (Octopus chierchiae) from their habitat in Nicaragua. Last year, he managed to get four wild-caught specimens from a wholesaler in Los Angeles, “who is the only person who has been able to get them into the country in the last several decades,” Grasse said. Once the exotic octopuses arrived at MBL, the next hurdle was to coax them to mate.

“Octopuses tend to be cannibalistic or, at the very least, aggressive toward one another. So just getting successful mating events without any sort of harm to the animals is difficult,” Grasse said.

“We kept the pygmy zebra octopuses well fed so they weren’t hungry during the mating trials,” Grasse continued. “Once together, we read their body language and if there were any negative interactions, we stopped the trial. If mating occurred and we believed the spermatozoa had been successfully passed, we separated them right away. We put the female in a nice, dark habitat and left her alone, so she didn’t feel threatened. Providing her with a laying refuge to encourage oviposition, or egg-laying, is important.”

Just over a week later, the team saw a clutch of tiny, pearl-white eggs appear. “We were really excited but we weren’t sure if they were fertilized,” Grasse said. They carefully tracked the eggs’ development using a microscope and later, a flashlight. After a few weeks they saw eye spots inside the eggs, “one of the first noticeable features that proves the embryo is viable. That was our big Eureka moment!” Grasse said.

After those first-generation embryos hatched, Grasse’s team cultured some of them to sexual maturity (about 4 months). They then mated those octopuses to create second- generation embryos. Those, too, hatched out just this week.

A pygmy zebra octopus (Octopus chierchiae) in the MBL's Marine Resources Center. An adult of this species is about the size of a table grape. Credit: Taylor Sakmar

Closing the Life Cycle and Beyond

Breeding multiple generations in the lab (called “closing the life cycle”) is critical in biology, as it allows researchers to study gene function and mutational effects from one generation to the next.

Yet crossing this major hurdle with the pygmy zebra octopus, Grasse says jokingly, “Was the easy part!” Given their aggressiveness, each hatched octopus needs a separate tank with a hiding spot and good water quality and flow. And the tanks must be secure, “so we don’t have octopuses escaping and running around,” Grasse said.

“And there are a lot of little, hungry mouths to feed on a day-to-day basis,” he said. Grasse and Taylor Sakmar, MBL Senior Cephalopod Culture Specialist, have trained a team of interns from Northeastern University’s co-op program to care for the species. “They have been a huge benefit,” Grasse said.

Grasse previously worked at Monterey Bay Aquarium, where he and others closed the life cycle on the flamboyant cuttlefish (Metasepia pfefferi) and the striped pyjama squid (Sepioloidea lineolata) for the first time. Those accomplishments attracted the attention of MBL leadership, which hired Grasse and his colleague Sakmar in 2017.

“Closing the life cycle of any cephalopod is no easy task,” Grasse said. “It takes a lot of effort and a lot of eyes on the animals. Having a great team is key! We are always reevaluating current practices, so we continue to improve as we learn more about the species. But collectively, we’ve reached that moment where we are breeding them consistently. We’re confident we can do it with very high survivorship of the offspring.”

A pygmy zebra octopus hatchling clings to the side of the tank. Notice how small it is compared to the salt crystals on the glass. Credit: Taylor Sakmar

Search for the Top Models

The MBL is testing several cephalopod species as potential “model systems” (laboratory organisms) for scientific research. It’s a big investment to breed, house, and develop genetic and imaging tools to study a cephalopod species, so “at some point we will need to narrow down our candidates,” said MBL Senior Scientist Joshua Rosenthal, director of the MBL’s Cephalopod Program.

Currently, the frontrunner is the Hawaiian bobtail squid (Euprymna scolopes). This animal’s life cycle was closed in 1997 at the MBL by Roger Hanlon and others. Today, MBL scientists are actively developing genetic tools for its study.

But the pygmy zebra octopus (Octopus chierchiae) has distinct advantages, including:

• O. chierchiae lays several clutches of 30-90 eggs over her reproductive period. Females of most octopus species lay just one clutch of eggs and then die (sometimes violently) after the eggs hatch. For pioneers like Grasse who are trying to breed these fickle creatures - and the MBL scientists who study them– several egg-laying events means more opportunities for deploying techniques, such as CRISPR-Cas9 gene editing, with the precious embryos.

• Adult pygmy zebra octopuses are small (about as big as a table grape). Since octopuses must be housed in separate tanks, smaller species are preferred in space-conscious labs.

“We still don’t know exactly which cephalopod species will rise to the top,” Grasse said.