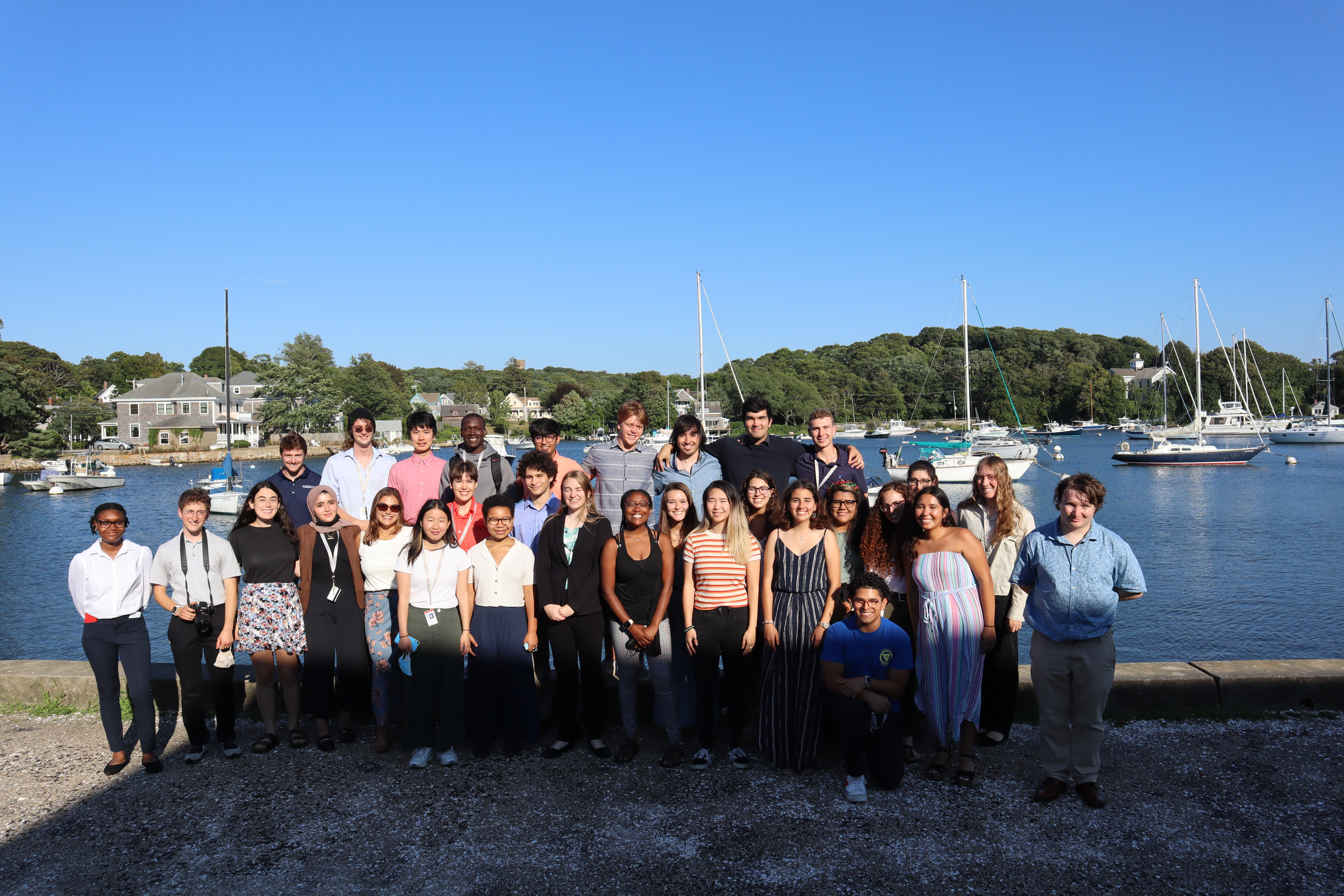 This summer, MBL welcomed over 50 undergraduate researchers to campus where they investigated questions in ecology, marine chemistry, animal behavior, and many other areas. 31 of the students, funded by both NSF Research Experiences for Undergraduates (REU) and UChicago’s Jeff Metcalf Summer Undergraduate Research Fellowships (SURF), presented their work on August 18 in an Undergraduate Symposium and Poster Session. Some student posters are pictured below and a full list of their research abstracts can be found here. (Photos by Nora Bradford)

SURF student Elaine Zhou of University of Chicago studied the extent to which octopuses are able to discriminate 3D shape with their arm suckers. Her research with MBL Senior Scientist Roger Hanlon and Kendra Buresch (in the right photo), research scientist in Hanlon’s lab, shows that octopuses are not able to distinguish prey from non-prey based on tactile interaction alone. 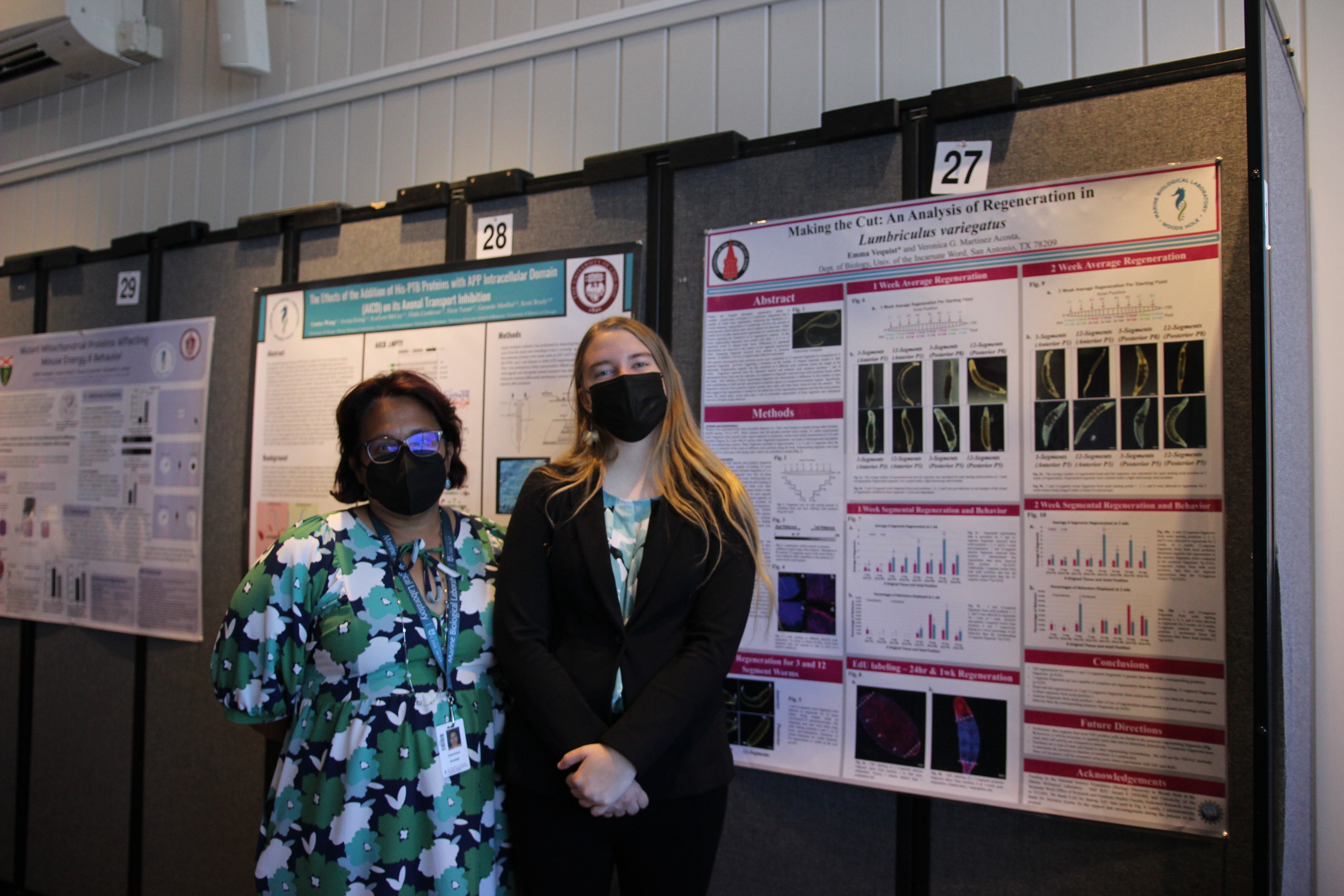 Emma Vequist, student at the University of the Incarnate Word, worked with Veronica Acosta (at left), co-director of the MBL’s NSF-REU program, to study the limitations of regeneration within the California blackworm. She investigated how much of the body is needed to regenerate and which segments were most important for regeneration. “My favorite part of the experience was getting to be around people who are excited about science,” says Vequist. “In everyday conversation, you don’t usually get to talk about science, but at MBL, you’ll be in the middle of joking around and someone will bring up scientific research. It’s really nice!”

Louisa Wang of the University of Chicago studied how amyloid precursor protein affects the development of Alzheimer’s disease. She came to MBL through the Jeff Metcalf SURF program and worked with MBL Whitman Scientist Scott Brady of University of Illinois Chicago. 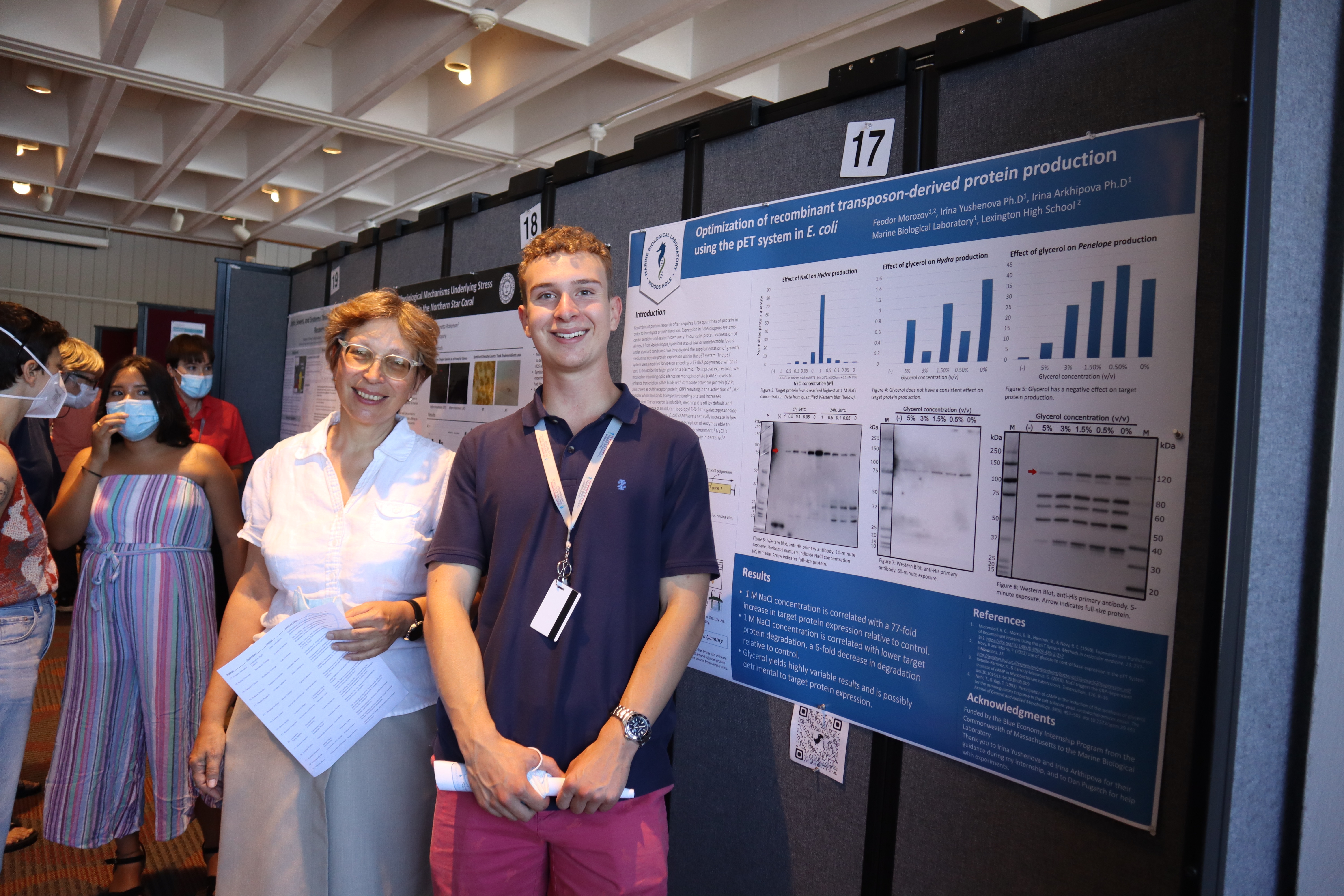 Feo Morozov of Lexington High School (right) worked with MBL Senior Scientist Irina Arkhipova (left) and found a way to increase recombinant protein production in E. coli. “If my result is reproducible, it would make research in our lab, and any lab using a similar system, a lot easier,” says Morozov. 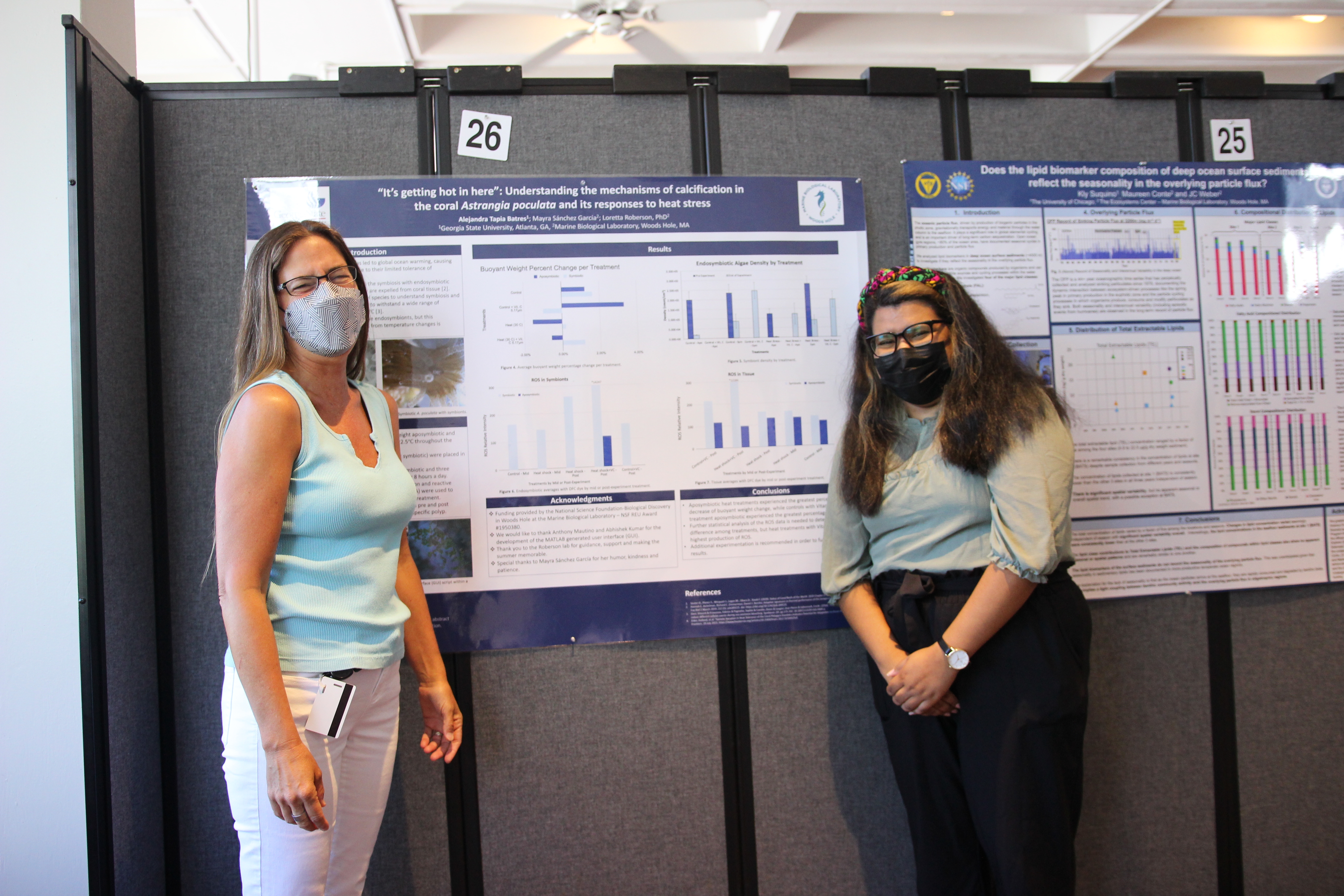 Lori Campbell from New York University studied the role of long-term-potentiation-associated molecules within hippocampal subfields during long-term avoidance memory. “My mentor, Andre Fenton [Whitman Scientist from New York University] has imparted wisdom worth years of experience not only in science but in life to me,” says Campbell. “We have developed a relationship where he addresses my curiosity through a language familiar to me.” She was supported by the NSF REU program. 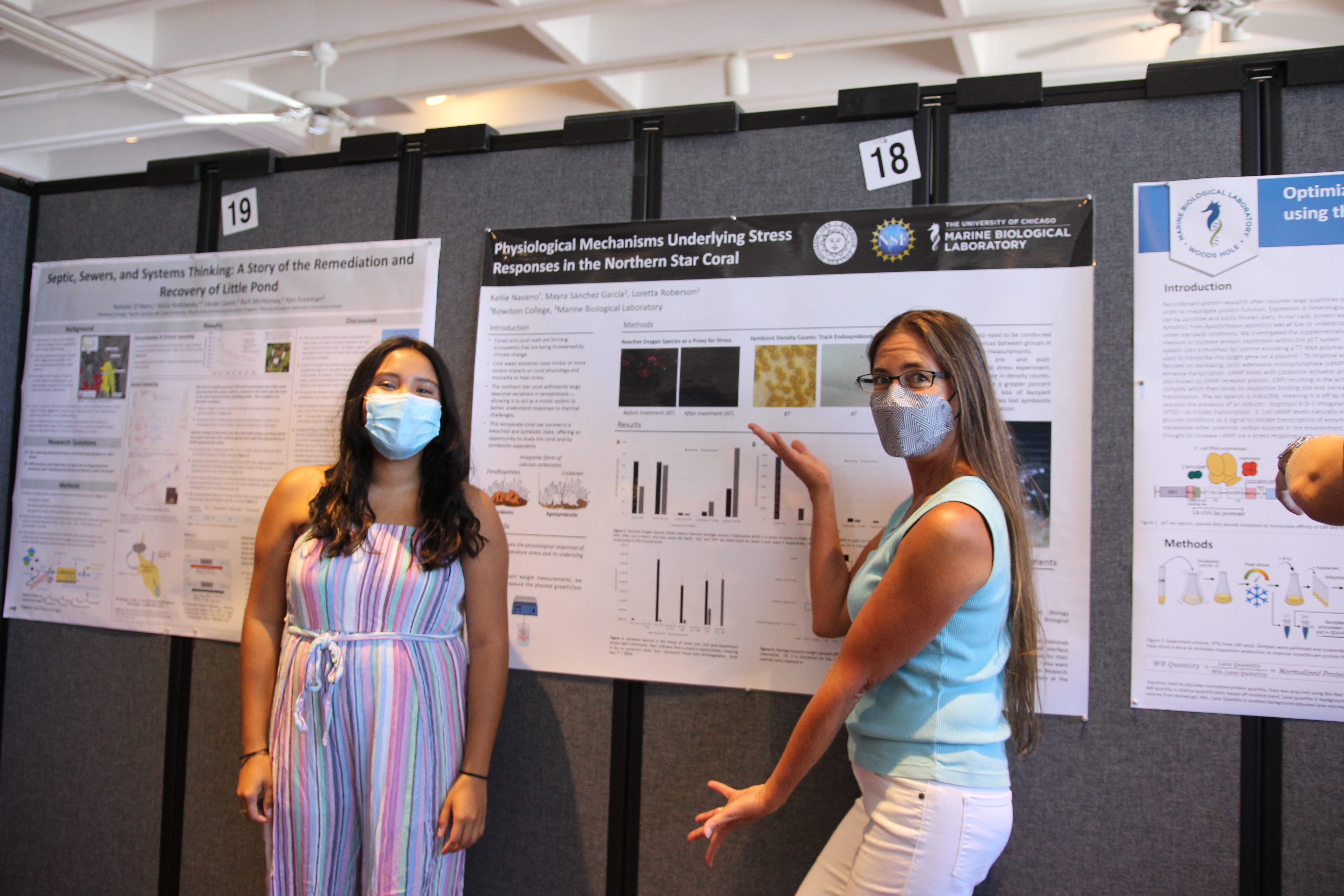 Kellie Navarro, senior at Bowdoin College, studied physiological changes in the Northern Star Coral in response to cold temperature stress with Loretta Roberson. She is grateful that the experience will open doors for her “because as a first-generation college student, it is difficult to network in a field that is very new to me,” says Navarro. 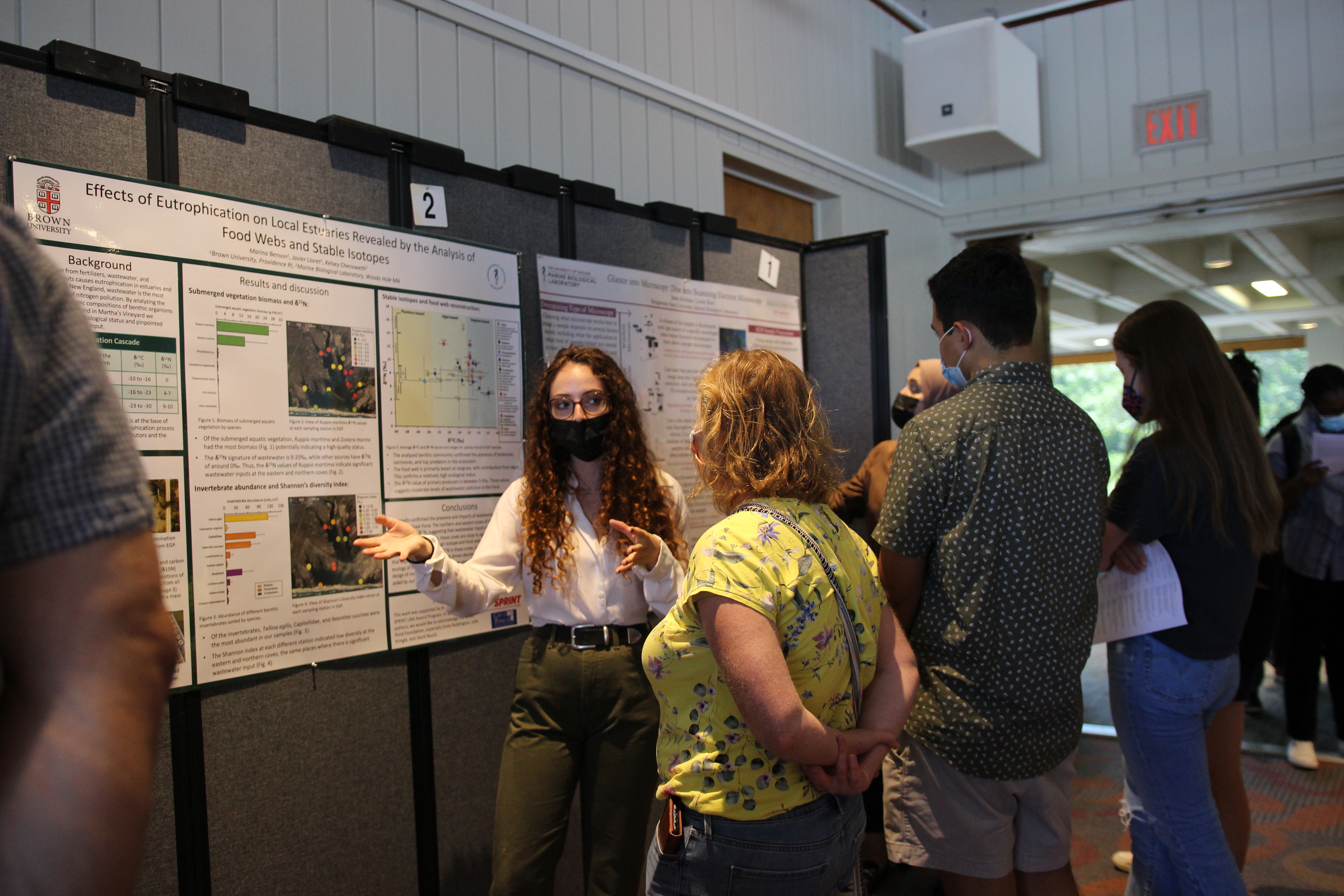 Marina Benson of Brown University investigated the effects of wastewater pollution on the ecology of coastal ponds by collecting samples from Edgewater Great Pond in Martha’s Vineyard. She found that areas with higher nitrogen content had a less diverse invertebrate community. Benson was supported by Brown University’s LINK award and worked in the lab of MBL Research Scientist Javier Lloret.

Jingkai Hou of the University of Chicago studied bdelloid rotifers, an aquatic animal that  can survive extreme dryness. His work paves the way for understanding the functional role in survival of certain rotifer proteins. Hou was a Metcalf SURF student and worked with MBL Senior Scientist David Mark Welch (at right in first photo). 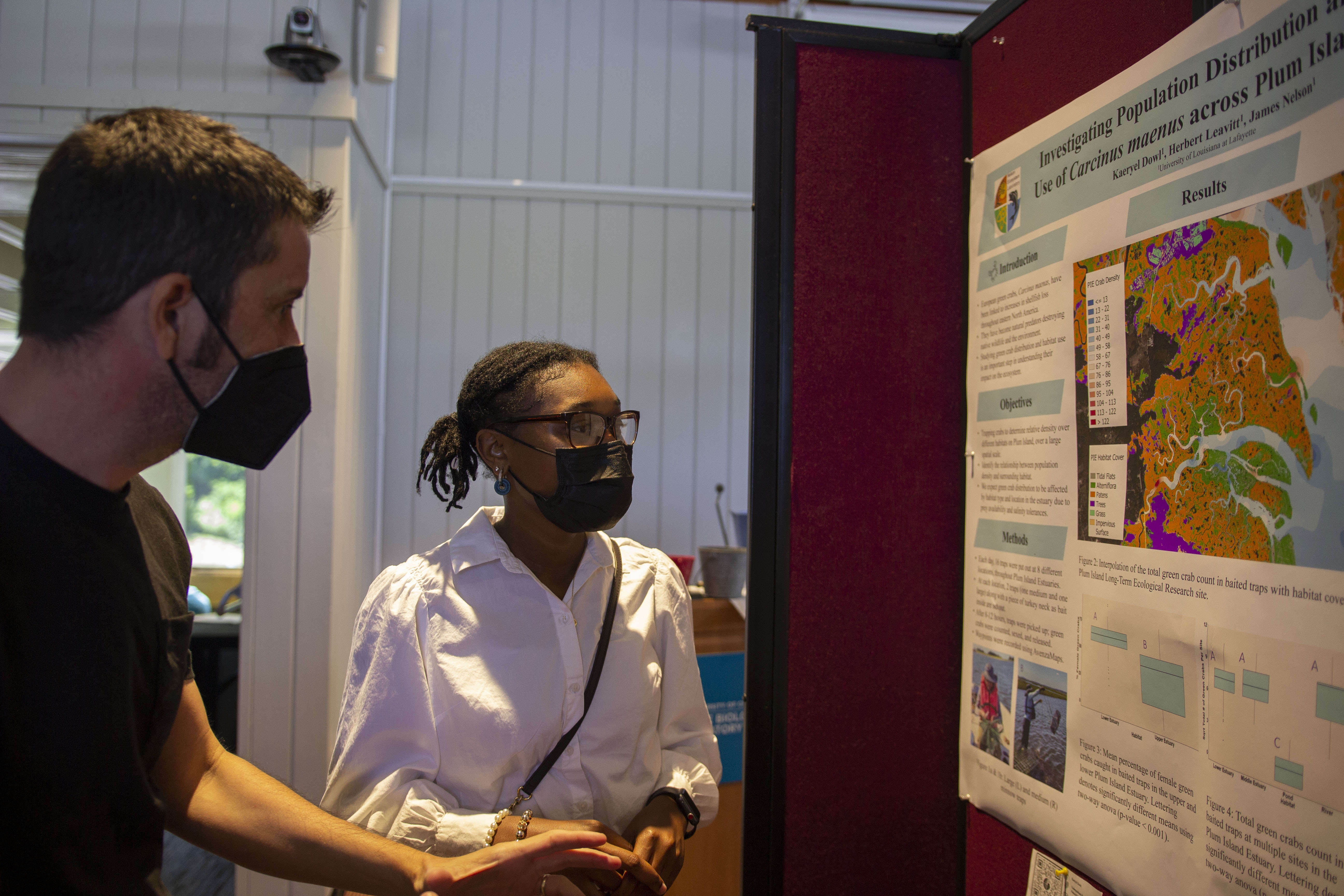 Olivia Cheung of the University of Chicago worked with Loretta Roberson to study the effects of increasing water temperatures on the physiological performance of tropical seaweed. She was not able to attend in person, but joined via zoom to explain her project and findings.

Kai Galvan-Dubois of Cornell University spent his summer studying carbon sequestration in a type of cyanobacteria with David Mark Welch. “Work like this in marine chemistry is super relevant for studying ocean acidification and climate change,” says Galvan-Dubois, who plans to use the skills he gained this summer to continue studying marine biology.

Isabella Cisneros of the University of Chicago worked with MBL Director Nipam Patel to visualize cell death during embryogenesis in two amphibian crustaceans. Cisneros came to MBL through the Metcalf SURF program.

Gia Eve Fisher of the University of Chicago studied a neural protein called α-synuclein and its role in Parkinson’s disease. Specifically, she looked at whether the protein alters mitochondria at important synapses using sea lamprey. Fischer was supported by the Metcalf SURF program and worked in the lab of MBL Senior Scientist Jennifer Morgan (at right in second photo).