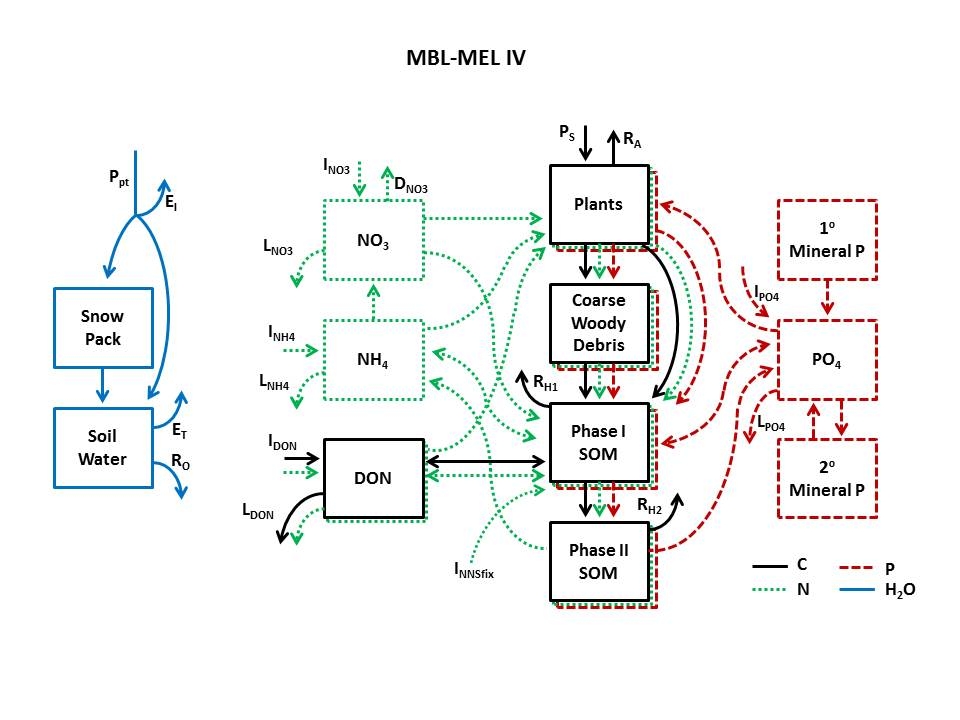 MBL MEL IV couples ecosystem carbon (C), nitrogen (N), phosphorus (P), and water cycles and runs on a daily time step. We use an aggregate representation of vegetation, partitioned allometrically into woody and active biomass. The algorithm that redistributes uptake effort allocates the active biomass to leaves or fine roots based on the relative limitation by canopy vs. soil resources (Rastetter et al. 2001). Photosynthesis is co-limited by CO2, light, and water. Nutrient uptake follows Michaelis-Menten kinetics with the substrate concentration at the root set by a balance between uptake and nutrient diffusion through the soil and maximum uptake set by the expended effort.

We use uptake effort to represent the aggregate of all plant assets (such as biomass, enzymes, carbohydrate) that can be deployed toward the acquisition of resources. The abundance of these assets increases in proportion to the active biomass in the vegetation and the dynamic allocation algorithm calculates the fraction of these uptake assets (Vi) allocated toward acquiring each resource (i). Uptake is proportional to both Vi and the total amount of active biomass.

The allocation of effort is based on the current requirements for, and the current uptake rates of, the resources. The requirement for each resource equals its consumption in metabolism plus its loss in tissue turnover times a factor that compensates for deviations of the resource concentrations in biomass from an optimum concentration. We calculate this optimum concentration from the allometric distribution of biomass among tissues and parameters defining the optimum concentrations in the tissues (parameters qLN, qWN, qRN, qLP, qWP, and qRP, where q is the biomass optimum of N or P (subscripts) in leaves, woody tissues, and roots (subscripts L, W, and R, respectively)). The dynamic resource optimization scheme allocates uptake effort among resources based on a function Ωi that increases monotonically with the ratio of resource requirement to resource uptake:

where Vi is the fraction of uptake effort allocated toward resource i, a is an acclimation rate parameter (day-1), and Φ is a variable that is calculated to ensure that the dVi/dt sum to zero and thereby keeps the sum of the Vi equal to 1. This allocation scheme drives the system toward a state where the ratios of uptake to requirement are equal for all resources and are in that sense equally limiting (i.e., Ωi=1/Φ for all i; Bloom et al. 1985).

For the substitutable resources, we calculate the requirement for each based on the total requirement and the marginal yield from allocated effort for each, including the effort needed to acquire resources consumed in uptake and assimilation of each resource.

We partition detritus into Phase I and Phase II soil organic matter (Melillo et al. 1989) and coarse woody debris. Coarse woody debris serves as a storage for woody litter that is slowly converted to Phase I soil organic matter (SOM) before it begins to decompose (Hyvönn and Ågren 2001). Phase I SOM represents the young, more active organic matter that implicitly includes microbial biomass, both mineralizes and immobilizes nutrients, and has a relatively high respiration rate. Phase I material also converts to Phase II material at a rate that at steady state is equivalent to ~20% of the coarse plus fine litter flux (i.e., 20% of the initial litter is eventually converted to Phase II material; Melillo et al. 1989). Phase II SOM does not immobilize nutrients, but continues to mineralize nutrients and respire C at a slow rate. Nitrogen enters the ecosystem via deposition of inorganic and organic N. Phosphorus enters as PO43– via deposition or the weathering of primary and secondary P minerals. Nitrogen and phosphorus are mineralized from both Phase I and Phase II material into NH4+ and PO43–. We partition the NH4+, PO43–, and dissolved organic N into adsorbed and dissolved fractions using a Langmuir isotherms (Weatherley and Miladinovic 2004); rates of leaching and uptake by plants and microbes are calculated based on the dissolved fraction. We assume no NO3- sorption by soils (Nodvin et al. 1986, Kaiser and Zech 1996) and that all the NO3- is therefore dissolved in soil water and is available for uptake by plants and microbes, leaching, and denitrification.

We partition precipitation into intercepted water, snow, and rain. We calculate a maximum potential intercepted volume based on the leaf area plus the surface area of the aboveground woody biomass. We assume that all precipitation up to this maximum volume is intercepted and evaporates. Precipitation in excess of this maximum value is added either to the snow pack or to the soil water, depending on air temperature (Brubaker et al. 1996). We calculate snowmelt based on net radiation to the snowpack and air temperature (Brubaker et al. 1996). Runoff from the soil water is proportional to the volume of water in excess of field capacity. Soil water potential is calculated based on equations from Clapp and Hornberger (1978). We calculate soil water uptake and transpiration by plants as proportional to the soil water potential above the wilting potential and proportional to an index of the daily vapor pressure deficit; the proportionality is set by the allocation of effort toward water uptake in the resource optimization scheme.

Download the model description, model executable, parameter and driver files for all figures.

A study investigating the mechanisms that control long-term response of tussock tundra to fire and to increases in air temperature, CO2, nitrogen deposition and phosphorus weathering. The simulations indicate that the recovery of nutrients lost during wildfire is difficult under a warming climate because warming increases nutrient cycles and subsequently leaching within the ecosystem.