How to Survive Without Sex: Rotifer Genome Reveals Its Strategies

WOODS HOLE, Mass.—How a group of animals can abandon sex, yet produce more than 460 species over evolutionary time, has become a little less mysterious with the publication of the complete genome of a bdelloid rotifer (Adineta vaga) in the journal Nature.

Rather than the standard way of using sexual reproduction to weed out harmful mutations to its DNA, this tiny aquatic animal appears to have adopted other strategies to maintain lineages over millennia that aren’t burdened by genetic damage or killed off altogether, says David Mark Welch of the Marine Biological Laboratory (MBL) in Woods Hole.

Mark Welch and his MBL colleague, Irina Arkhipova, are the U.S. leads on the international project to sequence the rotifer genome and analyze what it reveals. 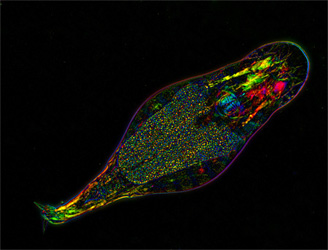 Neither males nor meiosis (cell division to produce sperm or eggs) have ever been observed in a bdelloid rotifer. Instead, the unfertilized eggs just divide to produce offspring. This reproductive strategy, which for most animals would be an evolutionary dead end, is borne out by the rotifer’s genome, the structure of which “is completely consistent with what you would expect to see with a long-term absence of meiosis,” Mark Welch says.

“It’s hard to prove a negative, and we can never say there is no chance the rotifer is ever having sex. But it would have to be some kind of crazy meiosis,” Mark Welch says.

In most animal species, alternative forms of the same gene (alleles) are found in the same spot on two different chromosomes—one from the mother, one from the father—which pair during meiosis, and segregate into new sperm and egg cells.  In the bdelloid genome, gene copies either don't match up positionally along chromosome pairs or are located on the same chromosome. This means the alleles would not be able to pair up normally during meiosis and segregate evenly into new sperm and egg cells.

If bdelloids are not having sex, how can they avoid the accumulation of deleterious mutations or generate new diversity?  The bdelloid genome shows evidence for other ways of maintaining healthy genes and viable lineages. One is gene conversion, in which one allele replaces another through DNA repair mechanisms or other strategies.  The other is horizontal gene transfer (HGT), the transfer of DNA from one organism to another, which is common among microbes yet rarely seen in animals. At least 8 percent of the rotifer’s genes, more than in any other animal, are likely to have been acquired by HGT.

“In general, animal germ lines are fairly well protected from acquiring DNA from external sources,” Arkhipova says. Bdelloids are unusual, though, in

that they can completely dry up (desiccate) for weeks or months at a time, and then spring back to life when water becomes available. During their desiccation phases, their DNA breaks up into many pieces. “When they rehydrate, this might be an opportunity for foreign DNA fragments from ingested bacteria, fungi, or microalgae to transfer into the rotifer genome,” Arkhipova says.

More significantly, this may also be a chance for the rotifer to incorporate genes from other rotifers. This would be quite useful if it needed to pick up genes to repair damaged ones through gene conversion, the authors suggest. “In this way, the processes of mutation and DNA repair mimic some aspects of sex,” Mark Welch says.

Another striking finding in the bdelloid rotifer genome was the extremely low number of transposons, “pieces of DNA sometimes called ‘genetic parasites’ that are capable of moving around the genome and causing harmful mutations,” Arkhipova says.  While about 50 percent of the mammalian genome is transposons, they constitute only about 3 percent of the bdelloid genome, “and their proliferative capacity appears to be severely limited,” Arkhipova says. This affords the rotifer a layer of protection from mutations that most animals don’t enjoy. “We are interested in dissecting this multi-layered genome defense system in our future studies,” she says.

Other MBL members of the 40-member international A. vaga sequencing consortium, which was led by the French national sequencing center Genoscope, are Bette Hecox-Lea, a graduate student in the Mark Welch laboratory, and Eugene Gladyshev, Fernando Rodriguez, and Irina Yushenova, postdoctoral fellows in the Arkhipova laboratory.

Is DNA Repair A Substitute for Sex? (2008)
No Sex, But Plenty of Gene Transfer (2008)
MBL Researchers Probe How an Ancient Microbe Thrives and Evolves Without Sex (2005)
An Evolutionary Exception Confirmed (2004)

The Marine Biological Laboratory (MBL) is dedicated to scientific discovery and improving the human condition through research and education in biology, biomedicine, and environmental science. Founded in Woods Hole, Massachusetts, in 1888, the MBL is a private, nonprofit institution and an affiliate of the University of Chicago.