Hunting Down the Enhancers of Evolution: How Does a Fin Become a Limb? 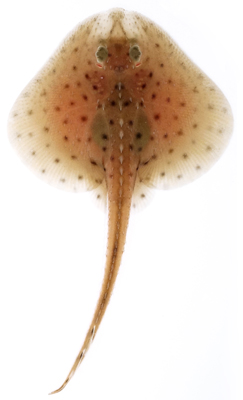 “Little skate” may sound humble enough, but this funny looking shark relative  – with giant fins fused around its flat head  -- is aiming for the big time.

On a recent summer day in their MBL Whitman Center lab, Tetsuya Nakamura and José Luis Gómez-Skarmeta are proudly wearing T-shirts emblazoned with a little skate. And they are happy to talk about their goal to bring the little skate into the elite group of animals  – along with human, mouse, a few others -- whose full complement of DNA (genome) has been mapped and functionally characterized to a high degree.

The little skate’s genome map will be “a huge resource for understanding human evolution and our vertebrate ancestry,” Nakamura says. Sharks and skates are ancient creatures that sit near the very base of the vertebrate lineage on the evolutionary tree. They are much more similar to humans than are zebrafish which, despite being a common model organism in biomedical research, sit on a more divergent branch of the tree of life.

“Having the skate genome will open a lot of new research questions in evolutionary and developmental (evo-devo) biology  – and people will come to MBL to answer them!” Gómez-Skarmeta says.

The Marine Resources Center at the MBL is the one of the only places in the world that collects this species of skate and breeds them for study, primarily for evo-devo biologists. These scientists compare how embryonic development is genetically regulated across many animal species, looking for the emergence of novel features, such as fins evolving into animal limbs.

What makes this quest so challenging is the fact that “most animals are constructed with the same toolkit of genes,” Gómez-Skarmeta explains. Among vertebrates, for instance, only 2 to 3 percent of the genome is protein-coding genes, and those genes are essentially the same in fish, mouse, and human. Somewhere in the rest of the animal’s genome, sometimes called the “dark matter,” are the instructions for how those genes will function -- and these instructions will be very different across species.

“The way different life forms are generated – why a fish doesn’t look like a human – is by using the same genes in different ways. These is done by regulatory elements in the genome that turn genes on or off during the life of the animal,” Gómez-Skarmeta says. “To a great extent, evolution is the history of changing the regulation of gene expression during development.”

It’s no accident Gómez-Skarmeta, an expert in finding regulatory elements (also called enhancers) in the dark corners of a genome, and Nakamura, a developmental biologist, share a bustling Whitman Center lab. Their collaboration was first orchestrated in 2015 by Neil Shubin, an evolutionary biologist at the University of Chicago and current interim co-director of the MBL. Shubin studies the evolutionary origin of vertebrate features, especially appendages such as fins and hands. In 2004, Shubin and colleagues startled the scientific world when they unearthed a 375-million-year-old fossil in arctic Canada that had features of both fish and amphibians – a fish with limbs. This rare find of a transitional fossil -- from the time when marine organisms first ventured onto land --  would later become widely known through Shubin’s book, “Your Inner Fish,” and a PBS television series with the same name.

Neil Shubin (center left) of University of Chicago with members of the Gómez-Skarmeta, Nakamura and Shubin labs in the MBL Whitman Center.

Nakamura was a postdoctoral researcher in Shubin’s lab when they realized that one path for exploring the genetic origins of innovation in fins (and in paired appendages) would be to find out what controls fin formation in the odd-looking little skate.

“The skate is really unique. Its pectoral fins are super wide,” Nakamura says. “In humans, if the hand develops too wide and it has 5 or 6 fingers, it’s a serious disease. So, we thought, if we could identify what genes regulate the formation of this super-wide fin in the little skate, it would help us understand [the generation of diversity] in an ancestral vertebrate and also a human disease.” 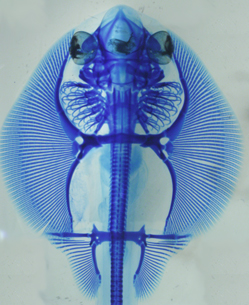 Shubin sent Nakamura to the MBL Whitman Center to work with skate embryos. That year, they pinpointed several genes in the little skate that also exist in limbed animals, but function differently. These genes, they suspected, generate the unusually wide pectoral fin (Nakamura et al, PNAS 2015).

Now the team is sequencing the entire little skate genome at several genomics centers across the world. In parallel, Gómez-Skarmeta is looking for the regulatory elements that fine-tune expression of their target skate fin genes.

The MBL, they agree, is essential to their work. “This Marine Resources Center is the best in the world,” Nakamura says. “We would never be able to breed this kind of huge marine organism somewhere else.”

Since Nakamura is based in New Jersey and Gómez-Skarmeta in Spain, they also appreciate the MBL as a place for “community, collaboration, discussion. Not only among skate researchers, but you meet a lot of scientists here working on many different species,” Nakamura says. “We can share techniques, we can talk about morphological or molecular diversity together. It’s just a really amazing place.” 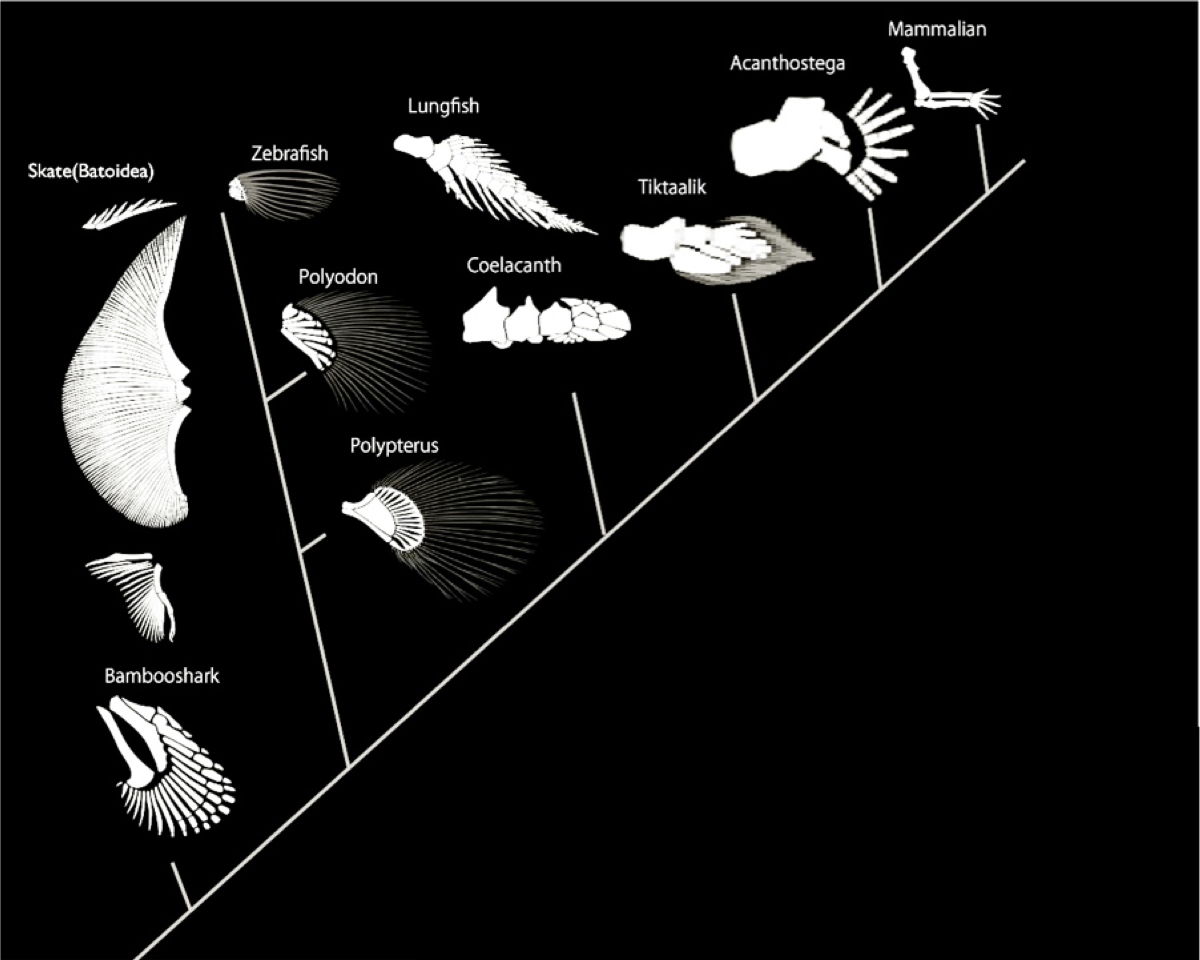 Diversity and evolution of fins and appendages. Skates (top left), sharks and rays belong to an ancient ancestral group of cartilaginous fishes. Tiktaalik is the transitional fish-amphibian fossil that Neil Shubin and colleagues found. By comparing how embryonic development is genetically regulated in different vertebrates, scientists can spot the evolution of novelty in the lineage – such as fins transitioning into limbs. Illustration by J. Westlund

Caption for home page photo: Skate embryo in its egg case in the MBL Marine Resources Center. According to Dave Remsen, director of Marine Research Services, they collect adult skates from the ocean and then keep about 10 females in a tank with one male. Although they have never actually seen skates mate, eventually the females deposit an egg case with an embryo inside. Once the embryo is about halfway through development, it can be removed from the egg case with its yolk and kept alive in seawater. Credit: Laurel Hamers