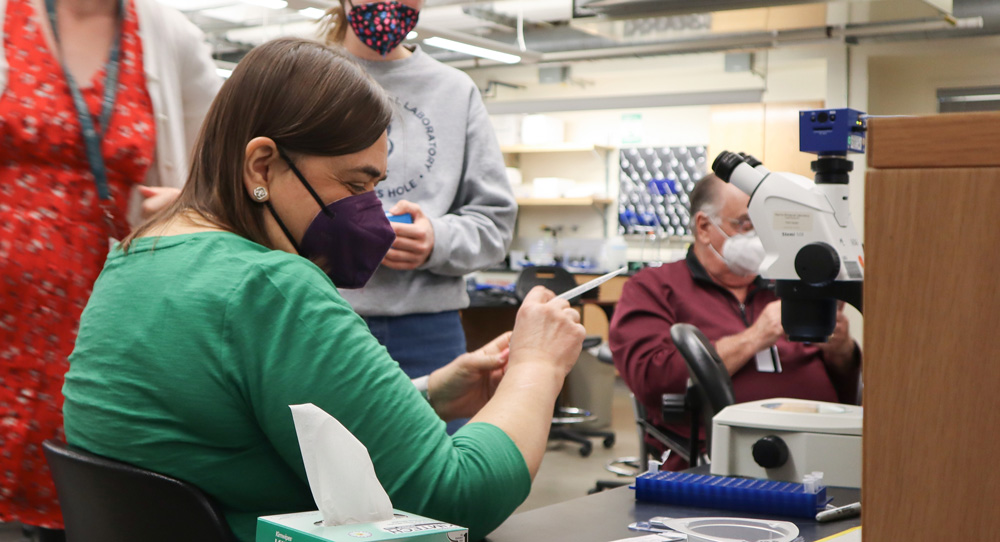 In late September, the new Scientific Discovery Program at MBL kicked off, welcoming seven students from the University of Chicago Graham School of Continuing Liberal and Professional Studies.

As a continuing education course at MBL, the program introduced a group of lifelong learners to the latest techniques, concepts, and ethical questions in cutting-edge biological research.

“We wanted to combine the strengths of the two institutions – the great faculty and liberal arts education from the Graham School and the hands-on science experiences of the MBL,” says Linda Hyman, Burroughs Wellcome Director of Education.

Prior to arriving in Woods Hole, the students met online for nine weeks, during which they learned from experts and discussed research on topics such as history of science, artificial intelligence, global water supply, and pharmaceutical biotechnology. Equipped with this background knowledge, they traveled to the MBL to see the science up close. Over the course of a week, the students dipped their toes in topics ranging from CRISPR gene editing to climate change.

In a series of lab sessions, they created mutations in the DNA of zebrafish embryos and used fluorescence microscopes to take images of their work. Students also toured the MBL/WHOI Library Rare Books Collection, looked at microbes sampled from nearby Sippewissett Marsh, and took a trip on the MBL’s collecting boat, the Gemma, in Vineyard Sound.

“I found myself revving up and my whole intellectuality and thought process just became alive in a way that it hasn't been for quite some time,” says Rita Sussman, a psychoanalyst and student in the course. Her late husband, Arthur Sussman, served as MBL’s interim director from 2014 to 2015.

“He died six years ago, so it was very important for me to form this connection with MBL. I felt so much closer to him because I thought very often of the way in which people were introducing us to the science at MBL – the microscopes, the lab procedures, and the Marine Resource Center –  and that he had probably been introduced to it as well,” says Sussman. “It was very much a time of connection, to MBL and to him.”

Like Sussman, students enroll in the Graham School to explore topics outside of their expertise, some with the intention of changing career paths and some out of pure curiosity. They come from a wide variety of backgrounds and life stages, and hold a plethora of interests. So too did those who enrolled in MBL’s new program.

One student, Nancy Gajewski, is a licensed clinical social worker who hopes to weave her new knowledge of biology into her environmental justice work. Another student, Bob Barnhill, worked at the MBL as technical assistant to a biophysicist in the 1960s. Upon returning to the MBL now, after retiring from a career in technology he reflected, “Woods Hole is one of my favorite places; the MBL experience changed my life once, and I would like to see if it could happen again.”

The variety of voices within the group made for lively discussions after lecture, in the lab, and even around the breakfast table.

“It was probably one of the highlights of my later life,” says Sussman. “It was exceptional.”