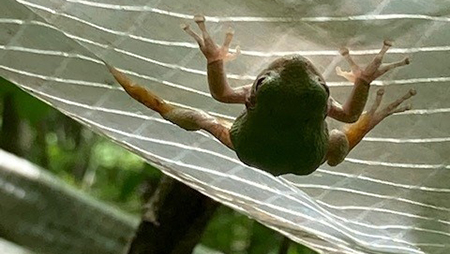 This frog hangs from a waterproof sheet in the Martell Forest as part of a U.S. Department of Energy study that monitors how plots of forest respond to drought. DOE has now funded a related study. Credit: Purdue Agricultural Communications/Theresa Hudson
By Steve Koppes November 18, 2022
Full Name
Zoe Cardon

WEST LAFAYETTE, Ind. — Purdue University’s Elin Jacobs has received a three-year, $911,000 grant from the U.S. Department of Energy to explore how tree roots help redistribute water in the soil. She will study how water flows from soils through plants and into the atmosphere and the impact of increasingly occurring droughts on that process.

“Plants through roots can passively transport water from wet areas of the soil to drier areas. They use their roots as straws and suck water from the wet areas and release it out into dry areas. Usually, they do this to access deep water,” said Jacobs, research assistant professor in Forestry and Natural Resources.

In this way, wetter soil draws closer to the surface, where most of the nutrients reside.

“When water mixes with those nutrients, they become accessible to the plants, which lets them grow and photosynthesize better for more than a day, even when it’s technically a drought or dry out,” Jacobs said.

The fieldwork will occur in the Martell Forest, about eight miles west of Purdue’s West Lafayette campus. Jacobs will perform the modeling on Purdue’s Bell supercomputer and, for large-scale simulations, on a DOE supercomputer. The data will help inform a planetwide computer simulation of Earth processes. The model includes elements of the atmosphere, ocean, sea and land ice, and terrestrial ecosystems.

Efforts to build the model followed the 2013 U.S. Department of Energy report U.S. Energy Sector Vulnerabilities to Climate Change and Extreme Weather. That report noted that increasing weather and climate impact on energy systems and the types of energy the nation uses would come with climate change.

Plant hydraulics models have been too complicated to plug into large-scale Earth system models like DOE’s. Today’s bigger, faster computers can do it, but too little data exists to verify that the models work properly, Jacobs said. Read rest of article here.