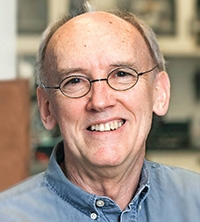 It is with sadness that we share the passing of MBL Society Member and former Trustee David C. Gadsby of New York, NY and Woods Hole, MA who passed away on March 9, 2019 after a long battle with cancer. He was 71. The MBL flag will be lowered to half-mast in his memory.

The remembrance that follows was adapted from a Rockefeller University obituary, with contributions from Dr. Gadsby’s longtime collaborator Paul De Weer.

David Gadsby was the Patrick A. Gerschel Family Professor Emeritus at The Rockefeller University where he led the Laboratory of Cardiac and Membrane Physiology. He was best known for his studies determining the mechanisms by which charged particles called ions move across cell membranes. Dr. Gadsby studied both the processes responsible for basic physiology, such as the rhythmic beating of the heart, and those responsible for pathology, such as cystic fibrosis.

Dr. Gadsby’s seminal research laid the foundations for much of what we know today about ion flux across cell membranes. He made critical contributions to understanding the molecular mechanisms of the Na+/K+ ATPase, which pumps sodium ions out of cells, establishing the resting membrane potential—the voltage across the cell membrane—of every cell in the animal kingdom. Changes in the membrane voltage underlie processes that are critical for life and diverse physiological functions including the conduction of electrical signals by neurons, muscle contraction, and hormone release. Dr. Gadsby also spent many years studying the CFTR chloride channel, whose mutation is the cause of cystic fibrosis. He established the novel mechanism that regulates the channel’s opening and closing.

His work was well-recognized and he received numerous awards including the K.S. Cole Award of the Biophysical Society and the National Institutes of Health MERIT Award. In 2005, he became an elected fellow of the Royal Society. Dr. Gadsby was a member of a number of professional societies including the American Heart Association, the Biophysical Society, and the New York Academy of Sciences, and was an elected fellow of the American Association for the Advancement of Science. He also served on the editorial boards of the Journal of General Physiology and Physiological Reviews.

Born in Cardiff, Wales, Dr. Gadsby earned his B.A. and M.A. degrees in physiology and biophysics from Trinity College, University of Cambridge, and his Ph.D. in physiology from University College London. He began his career at Rockefeller in 1975, as a research associate in the laboratory of Paul F. Cranefield. He was promoted to assistant professor in 1978, associate professor in 1984, and professor and head of the Laboratory of Cardiac and Membrane Physiology in 1991. He retired in 2017.

Starting in the late 1970s Dr. Gadsby spent most of every summer at the MBL where, mainly in collaboration with Paul De Weer and the late Robert Rakowski, he studied the kinetics and voltage sensitivity of the sodium pump in giant axons of the squid Doryteuthis pealeii, using radioactive isotopes and sensitive electrical measurements. Dr. Gadsby served the MBL as Trustee, Neurobiology Course faculty, and chair of Science Council. He was also an avid fisherman.

Dr. Gadsby is survived by his wife of 43 years, Patricia Gadsby, his brother, John Gadsby, and his sister, Deryn Hall.