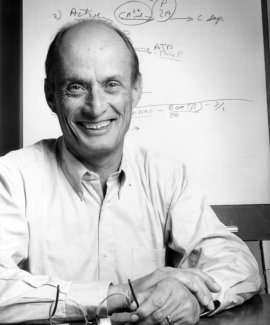 Below is an excerpt from Rockefeller University News

Neurobiologist Paul Greengard, a Nobel laureate who revolutionized our understanding of how brain cells communicate with each other and contributed to major advances in the treatment of a wide range of neurological and psychiatric diseases, died on April 13 at the age of 93. Greengard joined The Rockefeller University faculty in 1983, and was Vincent Astor Professor and director of the Fisher Center for Alzheimer’s Disease Research.

When Greengard began his career in the 1950s, scientists believed that nerve transmission was purely electrical, with nerve cells communicating exclusively through neurotransmitters that triggered electrical impulses in their neighbors. Biologists who studied the brain were therefore primarily interested in the electrical properties of its specialized nerve cells, or neurons.

Bucking convention, Greengard instead decided to investigate the biochemistry underlying neuronal communication. Over the course of 15 years, Greengard demonstrated that this alternate signaling method, now known as slow synaptic transmission, is in fact the predominant means by which neurons communicate with one another—an accomplishment that led to his sharing the Nobel Prize in Physiology or Medicine in 2000. Read more…