Pioneering a New Vision of Cellular Order at the MBL

Cliff Brangwynne in the MBL Physiology course, where he returned to teach this year. He is a 2006 course alumnus and in 2008, as a teaching assistant, he made a seminal discovery about cellular organization with others in the course. Credit: Dee Sullivan
By Diana Kenney September 16, 2022
Full Name
Joshua Rosenthal

When Cliff Brangwynne took one of the Marine Biological Laboratory’s research courses as a graduate student, it rocked his world -- an experience reported by countless other young scientists.

But in Brangwynne’s case, when he came back to teach in the MBL Physiology course in 2008, observations he and others made that summer would end up rocking the world of biomedical research at large, setting off a flood of scientific publications, renewing the paradigm for how cells self-organize, and inspiring several biotech companies to form as well as a deluge of media interest and scientific awards.

Through it all the soft-spoken Brangwynne, who seems somewhat taken aback by all that has transpired, has returned many times to the MBL to keep exploring this new paradigm for how cells create order in the speeding molecules that spin, fluctuate, and interact within their boundaries. What they saw in worm cells in the Physiology course, and has since been confirmed in many other organisms, is cells spontaneously forming liquid-like droplets, or “condensates,” that concentrate specific molecules in a membraneless drop, while excluding other molecules. Similar to water vapor condensing into dewdrops, they realized, condensates form through a phase separation process in the cell.

Why has that observation rocked biology? Through the work of numerous labs over the past 14 years, evidence has mounted that condensates regulate many critical cellular processes, from cell division to gene expression, and are involved in the development of diseases that include cancer, neurodegenerative disease, Covid-19, and others.

“The MBL is the birthplace of this field, because so much happened here,” Brangwynne says (see a summary here).“We were excited about the discovery from the beginning; we knew it had the potential to be important. But what’s been so surprising is how many different areas of science have been part of the development of the field – it’s drawn in people from structural biology, genetics, genomics, cell biology, plant biology, clinical biology, developmental biology. That’s been exciting.”

Cliff Brangwynne teaching in the MBL Physiology course in 2022. With him are, from left, Arkady Garber of Arizona State University and Jordy Botello and Sofia Quinodoz, both of Princeton University. Credit: Diana Kenney

Brangwynne, now a professor at Princeton University, was back at MBL this summer, co-teaching in the Physiology course and sharing a Whitman Center lab with Amy Gladfelter of University of North Carolina, Chapel Hill. These two leaders in condensate biology also collaborated with MBL Senior Scientist Joshua Rosenthal to explore condensate formation in the squid nervous system.

Beyond providing a whole new perspective on cellular order, “[condensates] are a new lens for thinking about the causes of disease and for conceptualizing a disease process,” Gladfelter says. “Many people hope this is also a new way to think about pharmacology,” she says, including herself and Brangwynne, who are associated with two of the biotech companies that have sprung up to pursue medical implications of condensate research.

Gladfelter, Brangwynne and others are also considering the role condensates may play in adapting to climate change. Because condensate formation is temperature-sensitive, “We think condensates will be an important piece of how plants, fungi, and free-living animals may cope with the extreme temperatures and water conditions that climate change is bringing,” Gladfelter says. One can imagine that plants, for example, could be engineered to form condensates to adapt to environmental stress.

“We are trying to expand the conversation about human health to include health of the environment, which we depend upon to eat and to live,” Gladfelter says. 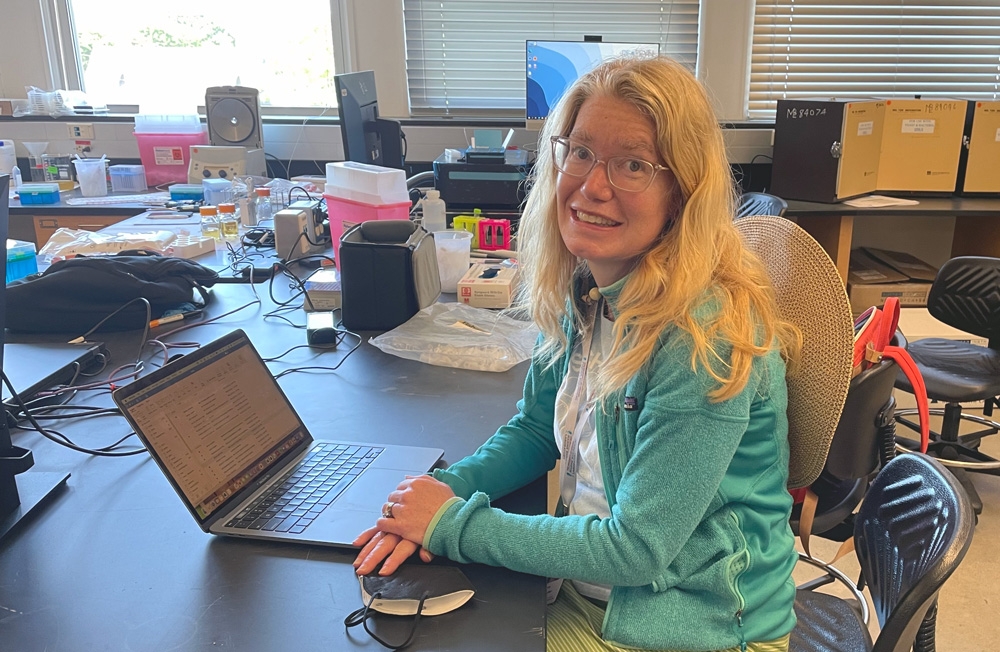 Amy Gladfelter in the 2022 MBL Physiology course, where she and Brangwynne co-taught a rotation on condensates, especially the structure and function of RNA within them. Credit: Diana Kenney

While much has been learned about condensates since the initial observation in the Physiology course, fundamental questions are still contested. Condensates are loose assemblages of molecules – usually protein and RNA – that transiently form and dissolve throughout the cell. What triggers them to assemble, what holds them together, why they dissolve and, not least, what their function is, remain areas of vigorous investigation.

“The simple picture of condensate formation is like oil droplets separating from water,” Brangwynne says. “The fun part is, it’s not so simple. These structures are much more interesting than we than realized in the beginning. It’s more like water [drops] and water; it’s dynamic interactions in an open network that’s fully aqueous.”

So how does a cell control its phase transitions leading to condensates appearing or disappearing? “Temperature is just one variable,” Brangwynne says. “Very small chemical changes can shift a phase equilibrium. … We think about the transition from a soluble state to these condensed liquid states as being mediated by a whole host of biomolecular interactions, for example, presence of RNA or chemical modification of RNA, or post-translational modification of proteins. These modifications basically modulate the biomolecular interactions and then the thermodynamics, the energy of interactions [in the cell], and could cause condensation of a [liquid droplet] or, in the other direction, disruption of condensates, where they essentially melt or dissolve.”

Remote video URL
Clifford Brangwynne, his postdoctoral advisor Anthony Hyman, and colleagues first observed condensates forming in C. elegans embryos in the 2008 Physiology course at the Marine Biological Laboratory. This video is from their 2009 Science paper reporting on the discovery. The condensates (P granules) are condensing on the posterior side of the cell. Credit: Brangwynne et al, Science, 2009

RNA in the Spotlight

For Brangwynne and Gladfelter, this summer at MBL has been all about the structure and function of RNA in condensates, as RNA is increasingly viewed as a potent trigger for phase separation.

“The field has been pretty focused on the proteins [in condensates] over the years, because that’s more familiar to most people, honestly,” Gladfelter says. “And yet there is a lot of information in RNA molecules within a condensate. My lab has been leading the way in terms of understanding how specific RNA features – the sequence, length, structure – impact condensate properties, such as where and when they form.”

Brangwynne was the first person to identify a condensate in the nucleus (the nucleolus, work began with Tim Mitchison in 2009 at the MBL). Today, “phase separation is emerging as a general mechanism for genome organization” (Klosin and Hyman, 2017).

Students in the Physiology course this year looked for condensate formation in the axoplasm of the local squid, Doryteuthis pealeii. Credit: Roger Hanlon

RNA also figures in the work of MBL scientist Joshua Rosenthal, who discovered many years ago that squid and other cephalopods can edit their genetic instructions to make proteins (messenger RNAs) at a strikingly high rate, especially in the nervous system. This diversifies the types of proteins the cell can make, and Rosenthal is exploring whether cephalopods use this mechanism to adapt to changing environmental conditions.

“My collaboration with Josh Rosenthal happened in classic MBL style -- we just started talking one day,” Brangwynne says. As it turns out, the enzymes that catalyze RNA editing “associate with proteins that we know phase separate and are involved in condensate formation,” Brangwynne says. Rosenthal wondered whether condensates might on some level be regulating which sites within a messenger RNA get edited, and which don’t.

“The MBL has played such an important role in the condensate field, not just for hosting the original discovery in the Physiology course, but for nurturing the field at multiple stages, creating spaces where people can collaborate,” Gladfelter says. “And I think we are moving into another stage right now.”