Seasons of the Microbiome Over the Amazon Rainforest

One may not think of the Earth’s atmosphere as “inhabited,” but it holds a multitude of suspended, biological particles (bioaerosols) that originate from bacteria, fungi, algae, plants and animals. Bioaerosols play an important role for ecosystems and the climate because they disperse microbes, influence radiation absorption, scatter sunlight, or nucleate cloud condensation. The diverse microbes living in bioaerosols are collectively called the aerosol microbiome.

The Amazon Basin, which harbors the world's largest tropical forest, may contribute significantly to emissions of bioaerosols on a global scale. But little is known about how environmental variables affect bioaerosol composition in the Amazon. A new study led by scientists from the Universidade Federal do Paraná in Brazil (with MBL's Emil Ruff collaborating) suggests that microbes in Amazon Basin bioaerosols originate mostly from leaf surfaces, not from the soil. Further, seasonal changes in temperature, relative humidity and precipitation are the primary drivers of compositional changes in this aerosol microbiome.

Isabella Hrabe de Angelis, a PhD student at the Max Planck Institute for Chemistry in Germany, supported the study with bioinformatic analyses of the Amazon microbiome data. (MBL scientist Zoe Cardon is on her doctoral committee.) As part of her work, Hrabe de Angelis participated in six field expeditions to the Amazon Tall Tower Observatory, a remote and pristine sampling site in the rainforest north of Manaus, Brazil. 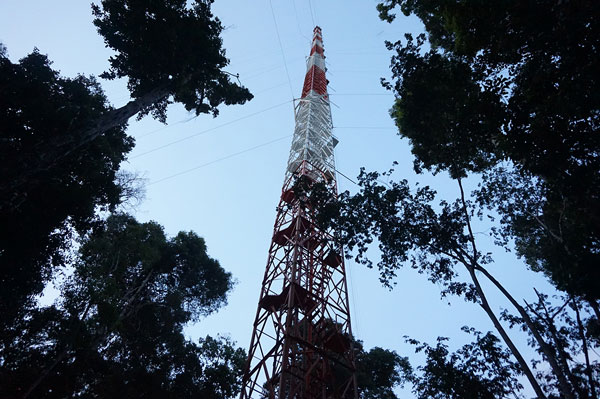 The Amazon Tall Tower Observatory is 325 meters high and was built to study and monitor interactions between the rainforest and the atmosphere. Credit: Isabella Hrabe de Angelis