What’s New Under the Sun? Offering An Alternate View on Evolutionary Novelty

WOODS HOLE, Mass. – Many crustaceans, including lobster, crabs, and barnacles, have a cape-like shell protruding from the head that can serve various roles, such as a little cave for storing eggs, or a protective shield to keep gills moist.

This shell (carapace), it’s been proposed, didn’t evolve from any similar structure in the crustacean ancestor, but appeared de novo (or out of the blue) through somewhat random co-option of the genes that also specify insect wings.

However, in a new study from the Marine Biological Laboratory (MBL), Research Associate Heather Bruce and Director Nipam Patel provide evidence for an alternate view: The carapace, along with other plate-like structures in arthropods (crustaceans, insects, arachnids, and myriapods) all evolved from a lateral leg lobe in a common ancestor.

This evidence buttresses their proposal for a new concept of how novel structures evolve – one which suggests that they aren’t so novel, after all. The study, on the carapace of the crustacean Daphnia, appears online in Current Biology.

“How novel structures arise is a central question in evolution,” Bruce says. “The prevailing idea, called gene co-option, is that genes that are functioning in one context, say to make insect wings, end up in an unrelated context, where they make, say, a carapace,” says Bruce. “But here we show that the Daphnia carapace didn’t just pop out of nowhere.”

Rather, they propose the ancestral, plate-like leg lobe that evolved into both the wing and the carapace was likely present in the ancestor of all living arthropods. But because the wing and carapace look so different from this ancestral plate, and from other plates in neighboring arthropod lineages, no one realized that they were all the same thing.

“We are starting to realize that structures that don’t look anything alike – wings, carapaces, tergal plates – are actually homologous,” Bruce says. “That suggests they have a single origin that is way more ancient than anyone would have thought, way back in the Cambrian period, [500 million] years ago.”

It was there all along (cryptic persistence)

“Serial homologs are things like hands and feet, or the vertebrae of our spine, or the many legs repeating down a centipede’s body,” she says. “The [repeats] can look really different, but you can see similarities, and they are all built using the same initial genetic pathways. In some cases, the full structure doesn’t grow out – you may get a truncated centipede leg, or it’s really subtle and tiny. While the cells have been programmed to form the leg, they aren’t actually growing out the leg.” 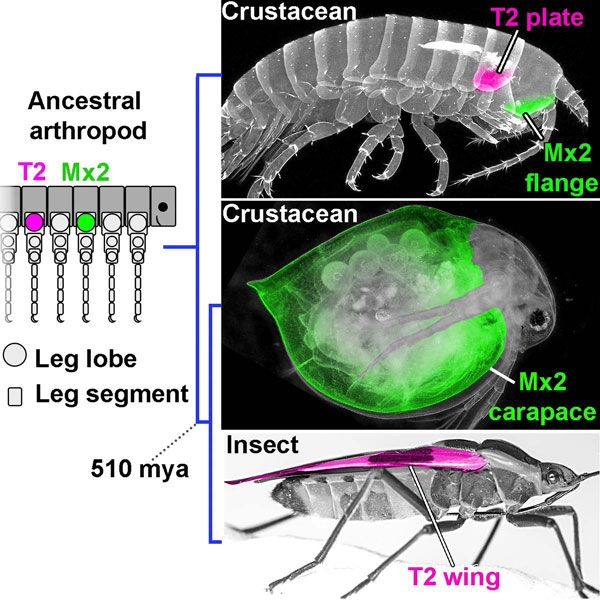 Graphical abstract on the evolution of the crustacean carapace. The ancestral arthropod had multiple plates on each leg on every body segment, similar to the living crustacean Parhyale. Later arthropods repress most of these, but any plate can be derepressed on any body segment to form what appears to be novel structures. The Daphnia carapace evolved by de-repressing and elaborating the blue head plate and the insect wing evolved by de-repressing and elaborating the pink thoracic plate. Credit: Bruce and Patel, Current Biology, 2022.

In Bruce’s view, these dormant rudiments - legs, plates, etc - can persist over millions of years, as long as another repeat of the structure is still present somewhere else in the animal. And when the time is right, the structure may grow out again and take different forms in different species – a wing in an insect, say, or a carapace in a crustacean.

“If an ancestral structure is no longer needed, nature probably just truncates or reduces that tissue rather than deleting it completely. But the tissue is still there and can be elaborated again in later lineages, and appear to us to be novel,” Bruce says.

“I think cryptic persistence can be an explanation for a lot of ‘novel’ structures,” Bruce says.

The authors drew their conclusions by analyzing gene expression patterns in several arthropod species, and by eliminating other hypotheses of how the carapace may have evolved.

“The ancient, common origin of all these plate-like structures [in arthropods] suggests the gene networks that pattern these structures are very evolvable and plastic. They are capable of generating an awesome amount of diversity,” Bruce says.