The Evolution of Evo-Devo

Studying evolution by focusing solely on fossils would leave many questions unanswered, but evolutionary developmental biology (otherwise known as “evo-devo”) helps fill in the gaps.

Evo-devo scientists investigate how animal embryos develop, which allows them to make inferences about evolutionary change. In other words, they look at the interaction of genes, cells, tissues, and the environment during embryonic development to glean how differences in those factors may lead to evolutionary change over many generations, such as the transformation of a fish fin into a vertebrate limb.

Andrew Gillis, who is joining MBL as an associate scientist later this summer, likens evo-devo to a form of comparative developmental biology. “Instead of focusing on studying one animal,” says Gillis, “you are comparing how different animals develop in order to understand how changes in development have led to changes in adult form.”

The Gillis lab focuses on the earliest events in vertebrate evolution, like the origins of fins, gills, and jaws. In order to understand which features were present in our oldest vertebrate ancestors, the lab studies a wide variety of vertebrates from far-flung branches of the evolutionary tree. By seeing whether features are shared between all of the animals, they can infer which ancestors in the evolutionary tree may have had those features. 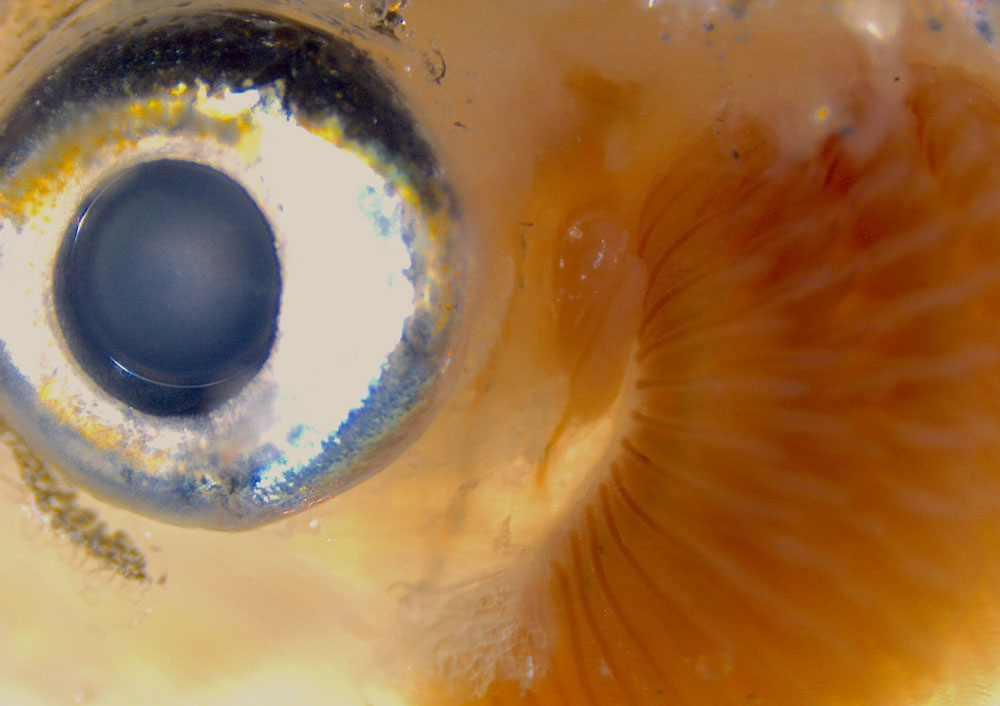 A zebrafish showing, from left to right, the eye, the pseudobranch, and the gills. Credit: Peter Fabian/Crump Lab

Evo-devo has seen waves of excitement following technological advances since its early days in the late 19th century, when scientists began searching for clues about evolutionary trends by peering into slices of embryos using histology and microscopy. Interest in evo-devo piqued again with advances in molecular biology that allowed scientists to piece together information about genes and gene expression during development. In recent years, the field has experienced yet another rebirth as tools for editing and sequencing genomes have advanced alongside new microscopy techniques. Despite evo-devo’s long history, “there are old questions that still remain largely unanswered,” explains Gillis.

The main cast of characters in developmental biology research tends to include animals like mice, chickens, zebrafish, and frogs. Evo-devo researchers often  compare these popular research organisms to less mainstream ones, such as the little skate (Leucoraja erinacea). In the past, skates have been used to study how fins evolved into limbs by researchers in the lab of Neil Shubin, evolutionary biologist at the University of Chicago and former interim director of the MBL. Gillis, a former PhD student of Shubin’s, has found a new role for the little skate in understanding how the jaw develops.

Gillis and his former student Christine Hirschberger, who is currently a postdoctoral research associate at the University of Cambridge, published a paper in Development this week that found a small structure at the back of the skate jaw that gives clues about how jaws may have evolved. The structure in question, the pseudobranch, closely resembles a gill, and shares cell types and gene expression features with gills, which hints that the jaw likely evolved from the same structures that create gills.

The pseudobranch was also the subject of a study in zebrafish by Mathi Thiruppathy, graduate student in the lab of Gage Crump at the University of Southern California and student in the MBL Embryology course this summer. In addition to using similar techniques as Hirschberger and Gillis, Thiruppathy’s group was able to use more genetic tools. They employed mutant gill-less zebrafish to show that a gene integral to the development of the gills is also essential for proper pseudobranch development, further supporting its evolutionary ties to the gills.

“Ours is a powerful approach to address many long-standing questions in evo-devo in the near future: identify regulatory programs responsible for specifying  tissues or cell types, then follow the deployment of this program within and across species to gain insight into how those structures evolved,” Thiruppathy says. “I think recent advances in single-cell technologies and genomics will be an important part of this pipeline.” The press announcement for two new papers from Gillis’s lab is here.

These papers build on previous work by Gillis’s team describing the genetic similarities between the upper and lower structures of the jaws and gills. Together, these papers offer convincing evidence that the jaw evolved by modification of an ancestral gill.

According to Gillis, the next step in this line of research will be finding fossils of jawless vertebrates and assessing whether they too have gills or gill-like structures that may be precursors to jaws. Of course, that will be the job of paleontologists rather than evolutionary developmental biologists, but there are many exciting questions left for evo-devo researchers to answer. 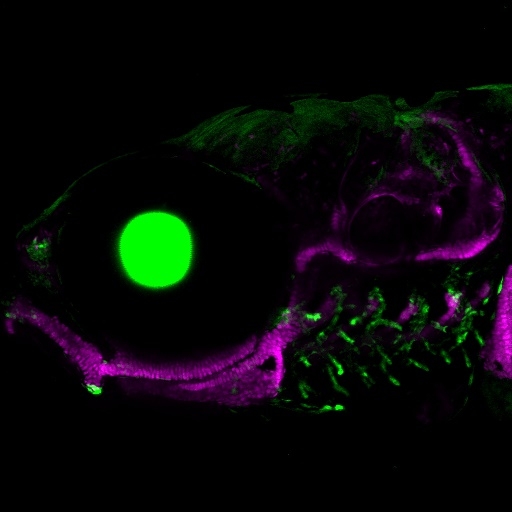 A zebrafish showing the skeleton and jaw (magenta), the eye (green circle on the left), and gill-like pseudobranch and gills (green structures on the right). Credit: Mathi Thiruppathy/Crump Lab

An early skate embryo, with the different embryonic tissues segmented and false-colored for illustrative purposes. The neural tube (future brain and spinal cord) is cyan, the pharyngeal endoderm (lining of the throat and gills) is yellow, the paraxial mesoderm (future vertebrae and trunk muscles) is magenta, the lateral mesoderm (future fins) is green and the tail bud is blue. Courtesy of J. Andrew Gillis