How Shapeless Blobs of Cells Grow into Wriggling Worms | Science 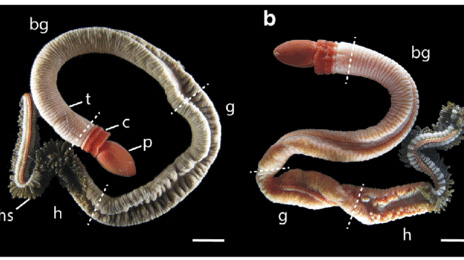 MBL Hibbitt Fellow Caroline Albertin comments on embryological research by Paul Bump that originated in the lab of Chris Lowe of Stanford University, who is a regular MBL Whitman Center investigator.

AUSTIN, TEXAS—A newborn infant looks unmistakably human, with legs, mouth, ears, and bottom all in place. The same can’t be said about the youngest sea stars, worms, or butterflies: Many invertebrates start out looking nothing like the adults they will become. Now, researchers have monitored one worm’s larval cells during the transformation to adulthood, spying on their fates and how their identities changed. The work, reported earlier this month at the annual meeting of the Society for Integrative and Comparative Biology here, provides some of the first clear cell-by-cell clues about what happens during these radical changes in body form.

“We are beginning to get at how a larva produces an adult body plan,” says Christina Zakas, an evolutionary biologist at North Carolina State University (NCSU) who was not involved with the work. The study’s reliance on a sophisticated technique for tracking gene activity in single cells is also a milestone. To date, most single-cell analyses have focused on well-studied “model” animals such as the fruit fly, mouse, or zebrafish. “That [the author] got this new technology to work on something that was not a model organism was just stunning,” says Greg Rouse, a marine biologist at the Scripps Institution of Oceanography who was not involved with the work. The work could inspire other biologists to study their own favorite metamorphosis at the level of single cells, he says. Read rest of the article here.