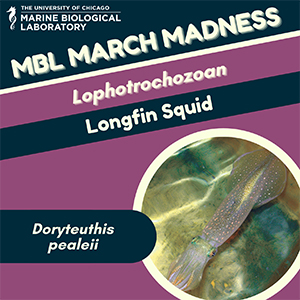 Doryteuthis pealeii, often called the “Woods Hole squid” by locals, is a longstanding model for cellular neuroscience, beginning with Nobel Prize winning research on nerve impulses in the 1950s. Studies with Doryteuthis pealeii have led to major advances in neurobiology, including description of the fundamental mechanisms of neurotransmission. At the MBL, it is used as a model organism to understand adaptive coloration, development, vision, and behavior. Like other cephalopods, Doryteuthis pealeii has the ability to extensively recode its own genetic information within messenger RNA. In summer of 2020, scientists at the MBL used CRISPR Cas-9 to knock out a target gene in Doryteuthis pealeii — a first for any cephalopod.

Publications from the MBL

Lophotrochozoa is one of the major groups within the animal kingdom. It comprises: segmented worms, mollusks (the phylum that includes snails, squid, octopuses, and clams) as well as lophophores, a group of animals that include clam-like organisms known brachiopods and bryozoans, sedentary colony animals sometimes referred to as “moss animals.” Learn more Meet the Other Lophotrochozoan Organisms

What is MBL March Madness?

Based on the March Madness NCAA basketball tournament, during MBL March Madness, popular MBL organisms face off for your votes. YOU have the opportunity to decide what organism is crowned victorious by voting for your favorite organisms in a series of head-to-head match-ups. Voting will take place on the MBL social media channels from March 29 - April 7. Learn more and download a bracket at mbl.edu/march-madness