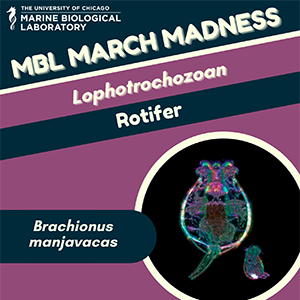 For scientists at the MBL, Brachionus rotifers are used as model organisms to study evolution, stress responses, the biology of aging, and maternal effects. Rotifers are small, easy to grow in the lab, have a short lifespan, and share many of their genes with humans. That makes them ideal specimens in which to address questions relevant to human health as well as understand basic biological and evolutionary processes.

Publications from the MBL

Lophotrochozoa is one of the major groups within the animal kingdom. It comprises: segmented worms, mollusks (the phylum that includes snails, squid, octopuses, and clams) as well as lophophores, a group of animals that include clam-like organisms known brachiopods and bryozoans, sedentary colony animals sometimes referred to as “moss animals.” Learn more Meet the Other Lophotrochozoan Organisms

What is MBL March Madness?

Based on the March Madness NCAA basketball tournament, during MBL March Madness, popular MBL organisms face off for your votes. YOU have the opportunity to decide what organism is crowned victorious by voting for your favorite organisms in a series of head-to-head match-ups. Voting will take place on the MBL social media channels from March 29 - April 7. Learn more and download a bracket at mbl.edu/march-madness