WOODS HOLE, Mass. – Squid, octopus, and cuttlefish – even to scientists who study them – are wonderfully weird creatures. Known as the soft-bodied or coleoid cephalopods, they have the largest nervous system of any invertebrate, complex behaviors such as instantaneous camouflage, arms studded with dexterous suckers, and other evolutionarily unique traits.

“Large and elaborate brains have evolved a couple of times,” said co-lead author Caroline Albertin, Hibbitt Fellow at the MBL. “One famous example is the vertebrates. The other is the soft-bodied cephalopods, which serve as a separate example for how a large and complicated nervous system can be put together. By understanding the cephalopod genome, we can gain insight into the genes that are important in setting up the nervous system, as well as into neuronal function.”

In Albertin et al., published this week, the team analyzed and compared the genomes of three cephalopod species – two squids (Doryteuthis pealeii and Euprymna scolopes) and an octopus (Octopus bimaculoides).

Sequencing these three cephalopod genomes, never mind comparing them, was a tour de force funded by the Grass Foundation that took place over several years in labs around the world.

“Probably the greatest advance in this new work is providing chromosomal-level assemblies of no less than three cephalopod genomes, all of which are available for study at the MBL,” said co-author Clifton Ragsdale, professor of Neurobiology and of Biology and Anatomy at the University of Chicago.

“Chromosomal-level assemblies allowed us to better refine what genes are there and what their order is, because the genome is less fragmented,” Albertin said. “So now we can start to study the regulatory elements that may be driving expression of these genes.”

In the end, comparing the genomes led the scientists to conclude that evolution of novel traits in soft-bodied cephalopods is mediated, in part, by three factors:

“Comparing the gene content of cephalopod chromosomes allowed us to take the first fundamental steps at deciphering the evolution of cephalopod genomes,” said study co-author Hannah Schmidbaur of the University of Vienna.

Why did These Cephalopods Make the Cut?

These three cephalopod species were chosen for study given their past and future importance to scientific research. “We can learn a lot about an animal by sequencing its genome, and the genome provides an important toolkit for any sort of investigations going forward,” Albertin said. 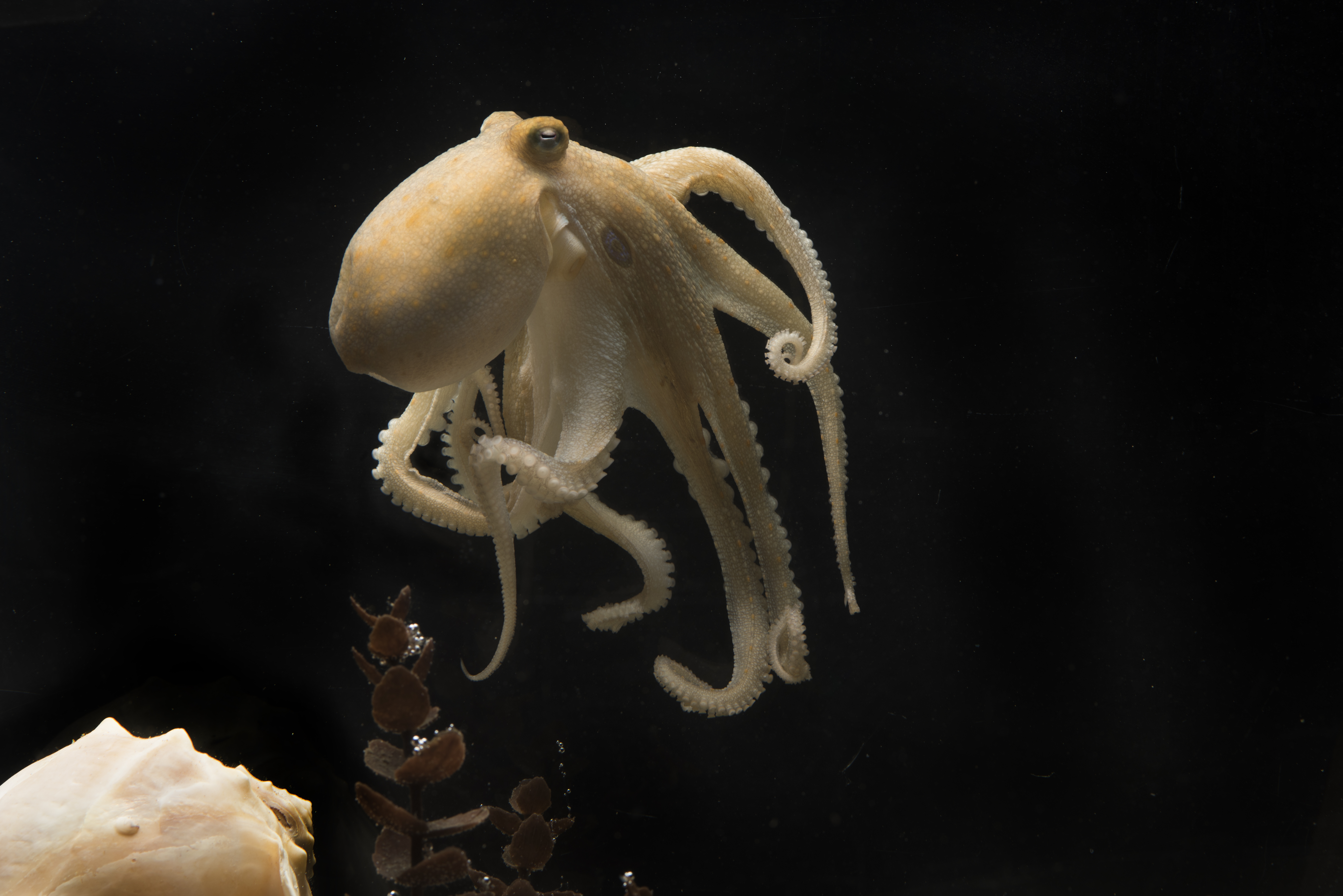 The California two-spot octopus, Octopus bimaculoides, was the first octopus genome to be sequenced (in 2015). Credit: Tom Kleindinst

“In the genome of Nautilis, an early-branching group of cephalopods with an external shell, the chromosomes and the order of genes are comparable to other invertebrates," Schmidbaur said. "Squid and octopus chromosomes, on the other hand, look completely different. The chromosomal-level assemblies of their genomes and the comparison of local gene order offer a glimpse at how evolution can take place at the level of DNA, affecting its 3-dimensional organization, gene regulation and likely the appearance and abilities of these intriguing animals.”

In a related study (Schmidbaur et al.), published last week, the team explored how the highly reorganized genome in Euprymna scolopes affects gene expression. The team found that the genome rearrangements resulted in new interactions that may be involved in making many of the novel cephalopod tissues, including their large, elaborate nervous systems.

“In many animals, gene order within the genome has been preserved over evolutionary time,” said Albertin. “But in cephalopods, the genome has gone through bursts of restructuring. This presents an interesting situation: genes are put into new locations in the genome, with new regulatory elements driving the genes’ expression. That might create opportunities for novel traits to evolve.”

What’s so Striking about Cephalopod Genomes?

Key insights into cephalopod genomes that the studies provide include:

They’re large. The Doryteuthis genome is 1.5 times larger than the human genome, and the octopus genome is 90% the size of a human’s.

They’re scrambled. “Key events in vertebrate evolution, leading to humans, include two rounds of whole-genome duplication,” Ragsdale said. “With this new work, we now know that the evolution of soft-bodied cephalopods involved similarly massive genome changes, but the changes are not whole-genome duplications but rather immense genome rearrangements, as if the ancestral genomes were put in a blender.”

“With this new information, we can begin to ask how large-scale genome changes might underlie those key unique features that cephalopods and vertebrates share, specifically their capacity for large bodies with disproportionately large brains,” Ragsdale said.

Surprisingly, they found the three cephalopod genomes are highly rearranged relative to each other – as well as compared to other animals.

“Octopus and squid diverged from each other around 300 million years ago, so it makes sense that they seem they have very separate evolutionary histories,” Albertin said. “This exciting result suggests that the dramatic rearrangements in cephalopod genomes have produced new gene orders that were important in squid and octopus evolution.”

Certain gene families are unusually expanded. “An exciting example of that is the protocadherin genes,” Albertin said. “Cephalopods and vertebrates independently have duplicated their protocadherins, unlike flies and nematodes, which lost this gene family over time. This duplication has resulted in a rich molecular framework that perhaps is involved in the independent evolution of large and complex nervous systems in vertebrates and cephalopods.”

They also found species-specific gene family expansions, such as the genes involved in making the squid’s beak or suckers. “Neither of these gene families were found in the octopus. So, these separate groups of animals are coming up with novel gene families to accomplish their novel biology,” Albertin said.

RNA Editing: Another Arrow in the Quiver to Generate Novelty

Prior research at the MBL has shown that squid and octopus display an extraordinarily high rate of RNA editing, which diversifies the kinds of proteins that the animals can produce. To follow up on that finding, Albertin et al. sequenced RNA from 26 different tissues in Doryteuthis and looked RNA editing rates across the different tissues.

“We found a very strong signal for RNA editing that changes the sequence of a protein to be restricted to the nervous system, particularly in the brain and in the giant fiber lobe,” Albertin said.

“This catalog of editing across different tissues provides a resource to ask follow-up questions about the effects of the editing. For example, is RNA editing occurring to help the animal adapt to changes in temperature or other environmental factors? Along with the genome sequences, having a catalog of RNA editing sites and rates will greatly facilitate future work.”

Co-authors are from University of Vienna; Research Institute for Molecular Pathology, Vienna; The Frances Crick Institute; The Vienna Zoo; University of Florida; Marine Biological Laboratory; and University of Connecticut.