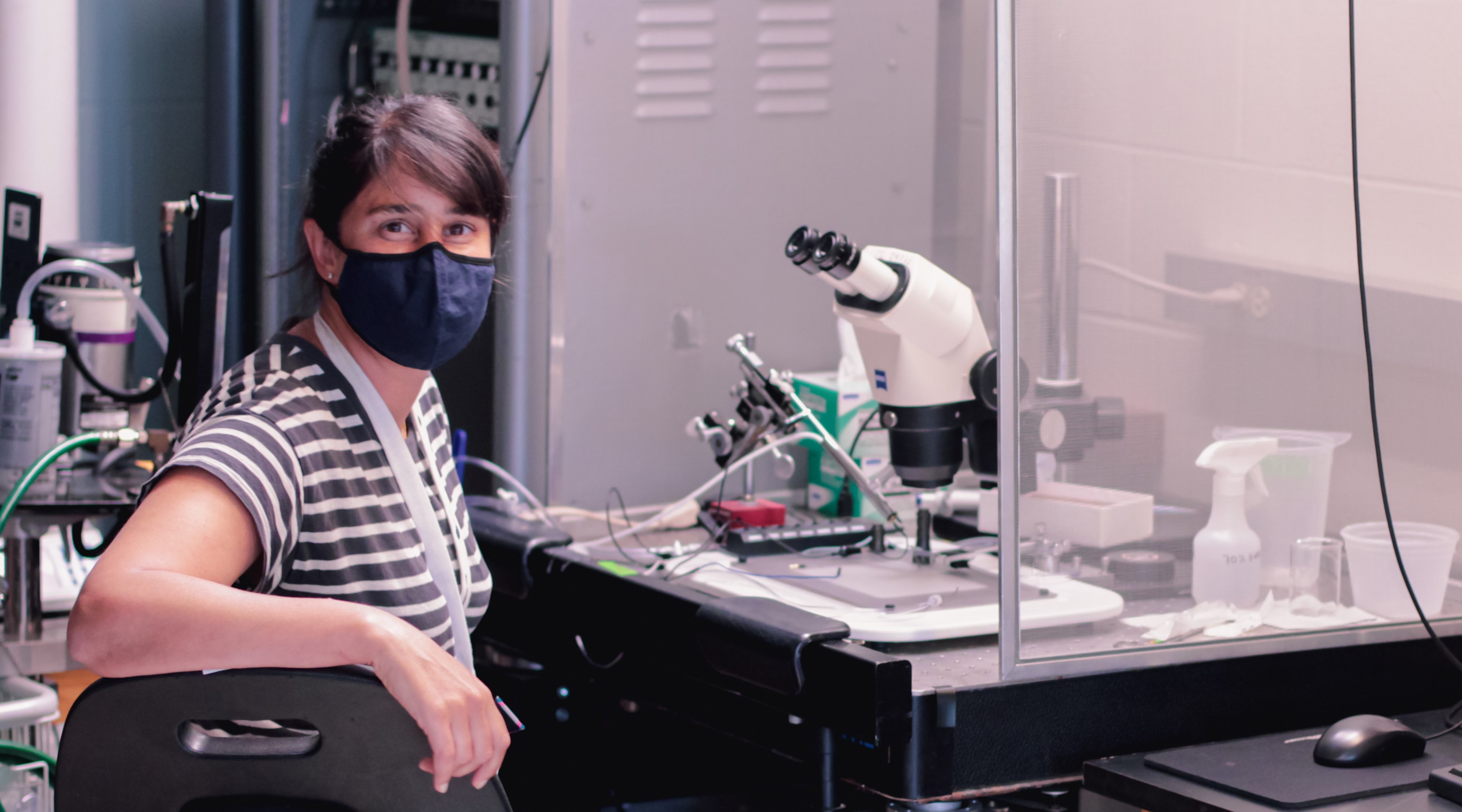 Maya Kaelberer sets up her microscope to look at the synapse between neuropod cells in the gut and the vagus nerve. Credit: Horst Andreas Obenhaus
By Nora Bradford July 07, 2022

Signals between your gut and your brain, among other roles, control digestion and give the sensation of feeling full. Classically, scientists thought that gut-brain communication relied on hormones floating from gut sensory cells to neurons in the brain. But from observing animal behavior, scientists realized that animals feel full way before hormone levels peak in the bloodstream, implying that there must be a faster mechanism at play.

Enter Maya Kaelberer, medical instructor at Duke University and 2022 Grass Fellow at the MBL. In 2018, she and her team discovered that scientists’ intuitions were correct: the gut communicates with the brain using more than just hormone signaling. They demonstrated that the vagus nerve connects (synapses) to certain sensory cells in the small intestine, thereby creating a fast, neural connection between the brain and the gut. They called these sensory cells “neuropod cells.”

In the years after her big finding, Kaelberer focused on how the gut talks to the brain through this direct connection. But now, she’s exploring the conversation’s other direction: how the brain communicates to the gut.

“Everybody knows this intimately: How we are feeling affects how we perceive the food we eat. But we don't really know what that circuitry is for that second half of the bidirectional communication [brain to gut],” Kaelberer says.

In her earlier work, Kaelberer found signs that signals from the brain were being received in neuropod cells. Just over a third of neuropod cells have markers that indicate a nerve cell synapses onto them.

This summer, Kaelberer wants to zoom in on this brain-to-gut connection and characterize how exactly the vagus nerve changes activity in neuropod cells. She is using a clever fluorescence technique to both identify the neuropod cells receiving synaptic signals, and stabilize the cells’ movement. 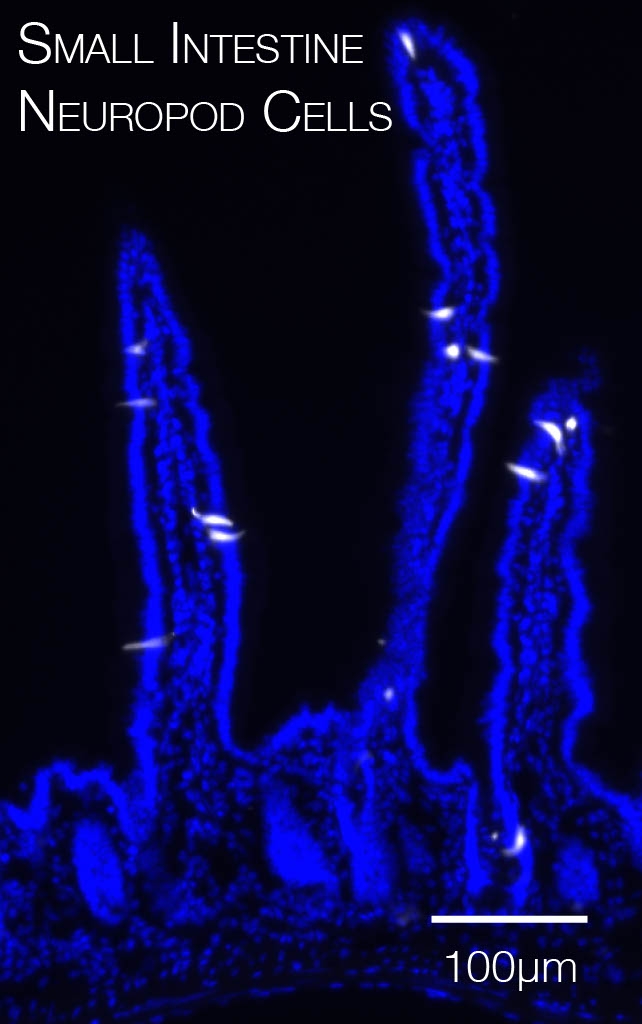 A section of the small intestine. In white are neuropod cells labeled with a NeuroD1 promotor that drives fluorescence, in blue is DAPI (nuclear stain). The top is the lumen side, the bottom the muscle side. Credit: Maya Kaelberer

Kaelberer hopes that her work this summer will contribute to her goal of eventually helping patients with gastrointestinal diseases, such as irritable bowel syndrome. She imagines a future where a clinician can take a simple biopsy of the gut epithelial layer where the patient has pain.The biopsy could be analyzed for abnormalities in RNA transcription that interact with key players in the gut-brain circuit, like a mutation in an important channel or an increase in transcriptional rate. Such a personalized treatment would be much more precise than the current remedies.

Nutritional adjustments or supplements also seem like a promising option for modulating this circuitry in patients down the road. 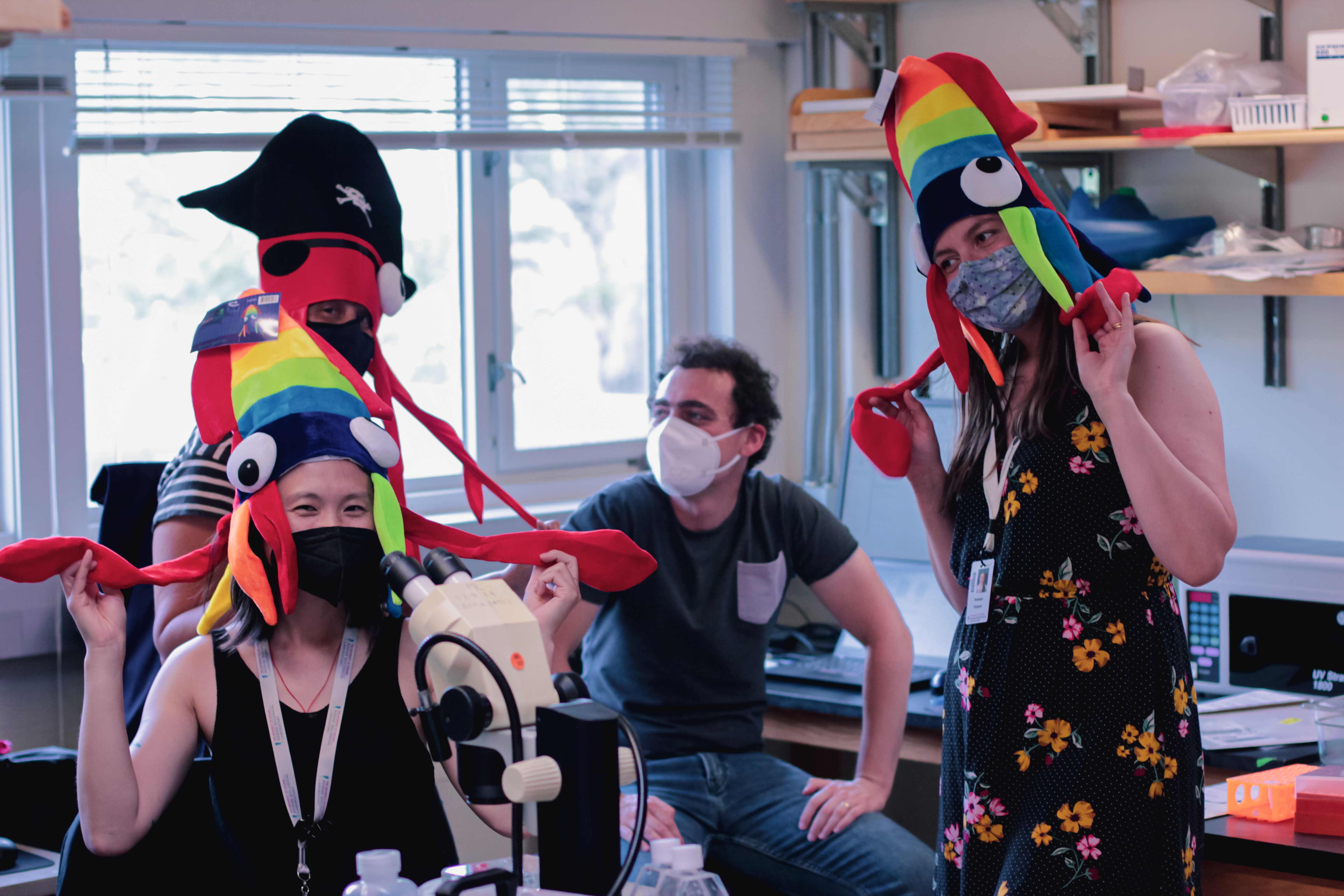 “One thing that really excites me about the Grass lab is everyone's working on different organisms,” says Kaelberer. “So I'm taking the opportunity to look at these various animal guts and see how they work.” Kaelberer hopes to dissect the inner workings of guts of animals ranging from cephalopods to microscopic aquatic animals called rotifers.

Kaelberer is no stranger to interdisciplinary collaboration. She organizes a community of gut-brain researchers called Gastronauts. “The goal is to get multidisciplinary diversity of thought – people from different cultures, different areas, different research disciplines – coming together to discuss their science, because this is when some of the better ideas form,” says Kaelberer. “So now that I’m at the MBL, I can compress all that interdisciplinary excitement into three months.”